There have been educators and scientists, conservationists and lawyers, visionaries and business leaders. Now we can add journalist to that laudatory list as beloved CBC Radio personality Shelagh Rogers begins her three-year term as the University of Victoria’s 11th Chancellor on June 8.

Click here to watch the live streaming ceremony of the installation of Shelagh Rogers as Chancellor.

“It’s a huge honour, I’m absolutely delighted,” says the characteristically humble host of The Next Chapter. “I must say, though, it came rather out of the blue. It just hadn’t occurred to me—this isn’t something you apply for—so I was hugely surprised when I got the call.”

While the idea of being a university chancellor may never have occurred to Rogers, she seems an ideal match for the university. Nationally respected for her nearly 35 years with the CBC and her role as Honorary Witness for the Truth and Reconciliation Commission, Rogers holds five honorary doctorates (Western, Mount Allison, Memorial, Nipissing and VIU) and was made an Officer of the Order of Canada in 2011. Heck, she’s even a West Coast island-dweller, having called Gabriola home for the past decade.

Likening the weeks leading up to her acceptance of the position as something of a “courtship period”—including meeting with both President Jamie Cassels and Board of Governor chairman Erich Mohr, familiarizing herself with UVic’s legacy of dynamic learning, interacting with students and touring the campus—Rogers says she quickly fell for our extraordinary academic environment. “Obviously, it’s very beautiful and I love the size, which is very attractive to students, faculty and staff; that’s a value that should be promoted and protected. But I’m just blown away by what UVic is doing to reach out to the community.” 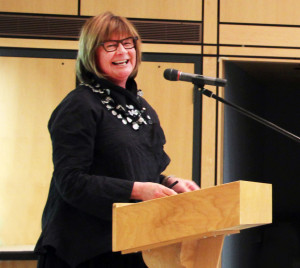 Rogers already feels a kinship with UVic’s vital impact on the city, the province, the nation and the world. “Community engagement is critical,” she insists. “A university is like a brain, and it’s vital for Victoria and Vancouver Island to have that interaction with UVic. There isn’t an elitist mentality here; there’s a nice flow between the community and the university. Decisions aren’t being made in small office in a large tower—it’s wide open. I see Jamie out on campus and he’s talking to people and anyone can talk to him. These are things that are really important; they represent the values of transparency and openness, and that’s a big part of why UVic rocks.”

no stranger to uvic 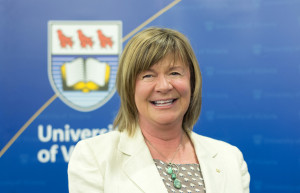 Rogers at the official announcement in 2014

Nominated by the “dean team” of Drs. Sarah Blackstone and Lynne Van Luven (the Dean and Associate Dean of the Faculty of Fine Arts, respectively), Rogers was a clear choice to follow outgoing Chancellor Murray Farmer. “Shelagh has a deep commitment to higher education and to the Aboriginal reconciliation process,” says Van Luven. “She has the ability to ask the right questions and to tell the whole story so that others can understand complex and urgent issues and ideas. She will enhance the excellence of our university, and bring tremendous energy and great insight to her new role. Her national reputation as an advocate for Canadian arts and culture will serve the university well. UVic could not ask for a better ambassador as we build on our reputation for excellence in teaching, research, and community engagement.”

Those sentiments are echoed by Jo-Ann Roberts, Rogers’ former CBC colleague. “Having a woman of her integrity, intelligence and natural curiosity [as Chancellor] speaks well of UVic,” says Roberts, who recently retired as host of CBC Radio’s All Points West to run as Victoria’s federal Green Party candidate, and was the Department of Writing’s visiting Harvey S. Southam Lecturer in Journalism and Nonfiction for 2013. “A lifelong learner herself, Shelagh is a champion of literacy and a proud Canadian with a passion for history, music and our Aboriginal history. She is also loved from coast to coast to coast for her genuine interest in the people who have shared their stories with her and whose home towns she has visited.” 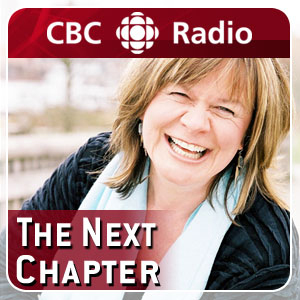 For her part, the 60-year-old Rogers will continue to host and co-produce The Next Chapter—her weekly showcase of books and ideas—from the backyard studio constructed by her husband, retired CBC technician Charlie Cheffins. As we talk, Cheffins sits next to us in a tearoom in Victoria’s historic Chinatown district, and Rogers often glances his way for supportive nods and encouraging smiles. (“I’m already calling him the Chancellor-in-Law,” she quips.) But when I mention the praise bestowed upon her, Rogers waves it away and instead shifts the spotlight to how her new role as Chancellor dovetails with her other longstanding role: being a witness.

“Witnessing is an active verb,” she explains. “And if you’re seriously committed to the retelling of what you’ve seen and heard, it’s not always comfortable.” Gesturing at the two pins gracing her lapel—one, the Order of Canada, the other representing her role as Honorary Witness at the Truth and Reconciliation Commission—Rogers’ voice takes on a serious tone. “The Order of Canada motto is ‘They desire a better country,’ and I do desire a better country, so I wear this button as a reminder. And this one”—she strokes a small strip of moosehide dangling from a silver shield—“reminds me of how important it is to be a witness, to recount and retell things you have seen and heard, to make sure the word gets out. It’s broadcasting, in a way.” 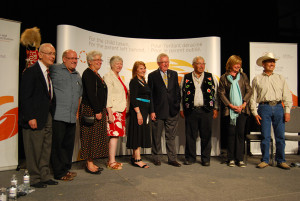 Rogers (second from right) at the Truth & Reconciliation Hearings

Rogers pauses and quotes an Ojibway elder who, on the eve of her testimony at the TRC hearings in Ottawa, told her to remember the words debwe win. “That means ‘speaking from the heart’ in Ojibway. And the word ‘witness’ itself is from in wit, which means ‘having a clean heart’ in Old English. The relationship with witness is very beautiful, how it all relates back to the heart. It’s not just hearing and seeing, but feeling too.”

Before accepting the position, Rogers made a point of speaking with former Chancellor Norma Mickelson—UVic’s first female Chancellor—who served from 1997 to 2002. “I was worried about how I could uphold the values of the university and support all the ways the university engages with the community and the students and respect all the relationships on campus and started thinking, ‘Wow, am I even qualified to do this?’ And Norma gave me a great piece of advice: ‘Just be yourself.’ She reminded me that I was asked for a reason, and talked about what joy the role had brought her. She really bulked up my muscles!” 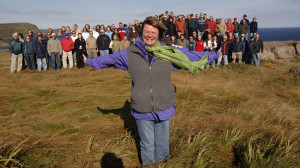 While her formal installation will coincide with her officiating at the Spring 2015 convocation on June 8, Rogers is already settling into her role on campus. “I feel incredibly stimulated—like my mind is always dancing—and that’s a very nice feeling,” she says. “This is a much broader discourse than what I do at the CBC. It’s going to be a huge stretch, but I feel I can go into the outside world and really talk about the UVic difference. And there really is a difference here. I want to get to know it as well and represent it to the best of my abilities.” 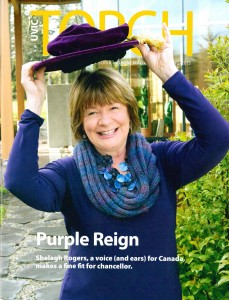 Noting that list of former Chancellors—scientists and educators and lawyers (“Oh my!” she chuckles again)—Rogers takes a thoughtful pause. “I’m different. I’m a journalist, and that will help me trying to understand the whole UVic story. As a journalist, my training has been to get at the real meaning—the truth—and to create dialogue. That’s important to me.”

As the page turns on her own next chapter, it’s clear Shelagh Rogers will always speak from the heart as she witnesses UVic’s continuing development here on the edge of innovation.

A shorter version of this interview ran in the Spring 2015 issue of the Torch, UVic’s alumni magazine. Click on the link to read Shelagh Rogers’ top books list and an excerpt of her on-stage live interview with UVic alumnus and Flickr & Slack innovator Stewart Butterfield.