With a comprehensive, hands-on theatre program like the one here at UVic, it’s no wonder the Victoria Fringe Fest once again features scores of productions with our students and alumni involved. Whether acting, writing, directing, designing or managing backstage, our students seem to be everywhere! (We’ve also added the Phoenixers who are part of the Vancouver Fringe, too.)

This year, three shows in the Victoria Fringe Festival got their start as Student Alternative Theatre Company productions: Negative Colours, Footprints and A Play, or Something Like It. (SATCo is an independent part of the Theatre department that presents eight short plays each school year.) This year there are over 62 UVic theatre students and graduates involved in the Victoria Fringe! Here’s a breakdown of who’s doing what: 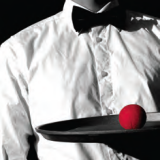 A Play or Something Like One (Silent Zoo Productions)
Metro Studio – Venue 3
A play centering around self indulgence. Following six characters: a modern day Hippolytus, a female sex addict, a hopeless romantic, an anti-everything man, a depressed alcoholic, and a delusional optimist. Caught in a web of hypocrisy and conflicting opinions each character expresses something they hold meaningful. Like the perfect pair of breasts . . . and other pressing matters. Written and directed by Frances Melling, Co-directed by Josh Turpin with designs by Erin Osborne and Levi Schneider; featuring Danielle Florence, Francis Melling, Ian Simms, Joanne James, Kaeden Derksen, Kevin Eade and Melissa Taylor, with stage management by Becca Jorgensen. 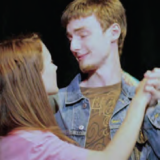 Avenue Q School Edition (SMUS Musical Theatre Workshop)
St. Michael’s University School – Venue 8
Winner of the Tony “Triple Crown” for Best Musical, Best Score and Best Book, Avenue Q is part flesh, part felt, and packed with heart. Avenue Q is a laugh-out-loud musical that tells the timeless story of a recent college grad named Princeton who moves into a shabby New York apartment all the way out on Avenue Q. He soon discovers that although the residents seem nice, it’s clear that this is not your ordinary neighborhood. To gether, Princeton and his new-found friends struggle to find jobs, dates, and their ever-elusive purpose in life. Directed by Cam Culham.
Note: this is a high-school version of the show suitable for all ages, adapted from the original material by the show’s creators. 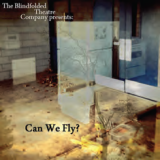 Can We Fly? (Blindfolded Theatre Company)
Westbay Walkway in Esquimalt
This inaugural piece is a collaborative work of physical theatre attempting to find balance between nature untamed and domestication. When humans have an incessant need to control their world, who suffers? Who fights back? We need to fly, but with strange forces opposing us, can we? Directed by Levi Schneider & company. Created & designed in collaboration by the cast and crew included Colette Habel, Nikola Whitney-Griffiths, Markus Spodzieja, Hayley McCurdy with Assistant Director/Creative Liaison Staci Sten. 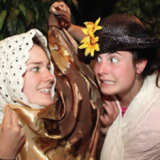 Fables, Fools and Fantasy (Story Theatre)
FamilyFest Fringe Venue
Performers prepared to tell almost any old story in the repertoire of familiar fables and folk tales. A simple set and a few costumes allow for all kinds of stories to be presented. Also stories made up on the spot, a few games and some music. You never know what will happen next! Family fun!! Written/Created by Jim Leard and company. 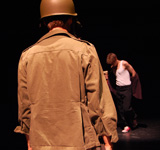 Footprints (Noonan Theatre) Metro Studio – Venue 3
“If I go forward, I’ll risk being annihilated by a land mine. If I follow the footprints back, they’ll punish me. Who knows, they might even shoot me.” Lost in a minefield, a deserting soldier looking for answers relives the pain of repressing his sexuality and love for a childhood friend and fellow solider. Written/Created and directed by Molly Noonan featuring Chelsea Keene, Will LaFrance, Taylor Lewis, Anne McGladdery and stage management by Drew May. 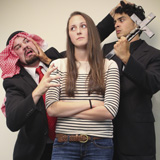 Judgement Day (New Blood Theatre)
Maritime Museum of BC (Bastion Square)
The Earth was destroyed and 7 billion souls remain to be sorted. With over 4200 religions to choose from, who could possibly take on that job? Enter the Courtroom of the Afterlife, where bureaucracy meets hilarity in the contradictory realm of faith and logic. Written/Created by Robin Gadsby, directed by Kieran Wilson, designs by Neil Ferguson featuring Sarah Cashin, Alex Frankson, Robin Gadsby, James Roney, Kieran Wilson with stage management by Tannis Perry. 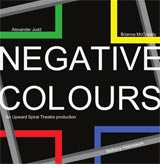 Negative Colours (Upward Spiral Theatre)
Langham Court – Venue 5
How can an artist move forward with doubt and uncertainty? Observe how various definitions and opinions of ‘unfinished’ work can impact an artist’s struggles and attempts to return to past ambitions. Can the support and opposition of others lead someone to the exploration of the past that many seem to forget? Written/Created and directed by Rain Mair featuring Bethany Heemskerk, Brianna McCready, Nicholas Yee with designs by Blair Moro, Meaghan McKale, Levi Schneider, Emma Dickerson and assistance by Victoria Stark, Drew May, Chw Yu and Becca Jorgensen. 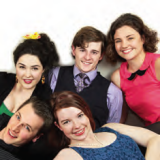 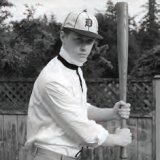 Something Like A War (Ocean Bloom Productions)
Metro Studio – Venue 3
Baseball legend Ty Cobb treated both ball and life as if he were going into combat every day. Here we meet the controversial Georgia Peach in all his notoriety, along with the people, events, and culture that helped create him. He was, said one sportswriter, “a mass of paradoxes with a life that reads like a Gothic horror tale.” Directed by Brian Wrigley. 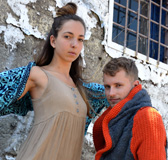 The Clan Resilience: It’s all in our nature (Impulse Theatre) Discovery Coffee (664 Discovery Street)
Impulse Theatre is taking over a parking lot with this site-specific surreal piece. Two animals make a deal with two witchy sisters to gain what they need to survive, but what are they prepared to lose? A myriad of genres with live music, masks, dance and theatre, this is a fringe experience you are guaranteed to remember for years to come. And at the Vancouver Fringe: See Impulse Theatre’s Shattered, which debuted at Intrepid Theatre’re UNO Fest last spring. Written/Created by Andrew Barrett and ensemble. Directed Andrew Barrett with designs from Paphavee Limkul, Jonathan Maxwell, Halley Fulford, featuring Andrew Barrett and Sarah Sabo. 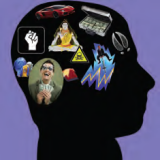 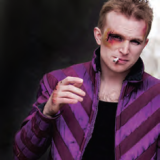 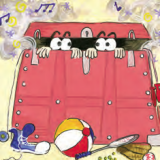 Trunk! (Kerploding Theatre) FamilyFest Fringe Venue
Daisy and Oliver depart on a thrilling adventure with the help of a magical toy trunk and a singing dragon. Trunk! will draw you in to a world full of possibilities with toe-tapping musical numbers and an array of silly characters. Inspired by stories written by children from all over Victoria, this family-friendly play is full of childhood imagination.
Written/Created by Molison Farmer and the ensemble. Directed choreography by Molison Farmer with music by Francis Melling and designs by Breanna Wise and Chelsea Graham and stage management by Harriet Best featuring Kaeden Derksen, Julie Forrest, Haley Garnet, Kathleen O’Reilly, Kale Penny, Veronique Piercy and Francis Melling. 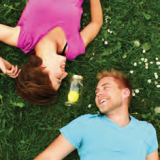 Where Have All The Lightning Bugs Gone? (Star Star Theatre) Fairfield Hall – Venue 6
“How are you?” “Good. How’re you?” “Good.…” When was the last time you had this exact conversation? This week? Today? Two strangers in a park take a chance, skip the small talk, and because they do, they actually get to meet. A sweet one act that hails the bravery of striking up a conversation with a pretty girl, the tumultuous adventures of make believe, and the magic of first loves. Artistic Producer, Mika Laulainen. 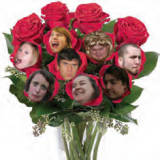 You Had Me at Improv (Singles Awareness Theatre)
Langham Court – Venue 5
Warning: This show may induce serious side effects such as gut busting, uncontrollable guffaws, knee-slapping, and in severe cases, piddling your pants. Your risk may increase if you have a good sense of humour. This magical sketch comedy performance is created by the cast using pixie dust, luck, and the tears of a baby sloth. Written/Created by Amy Culliford and Blair Moro, including Logan Mitev, Hayley McCurdy, Markus Spodzieja, Allyson Leet, Kathryn Taddei, Amy Culliford and Blair Moro. 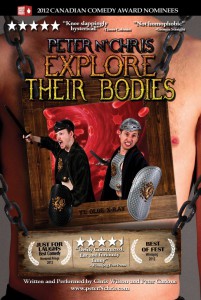 Plus, the Fringe Fundraiser—Peter N’ Chris Explore Their Bodies (Peter N’ Chris)
Phoenix alumni, dynamic comedy duo and the featured presenters of last year’s Spotlight on Alumni show Peter N’ Chris and the Mystery of the Hungry Heart, return to Victoria to perform their newest hit show that’s winning awards across the Fringe circuit. This is a fundraiser for Intrepid Theatre on September 4 & 5 at Metro Studio. They’re also doing a show with Vancouver improve troupe Hip.Bang on September 2 & 3 at the Event Centre. And at the Vancouver Fringe, you can see Explore their Bodies and their newest show, Peter N’ Chris Give it a Shot. Written/Created and performed by Chris Wilson and Peter Carlone.