One of the most talented and celebrated younger poets in Europe, the award-winning Tomasz Różycki will be on campus from February 14 to 20, thanks to the collaborative efforts of UVic’s departments of Writing and Germanic & Slavic Studies. 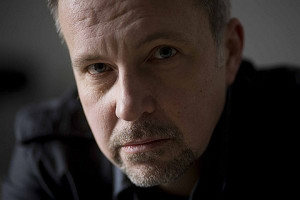 “He really is one of the most remarkable younger poets in Europe,” says Writing professor and tour organizer Tim Lilburn. “He’s published scads of books and they’re almost automatically being translated in English, which is quite rare. He’s really attracting a lot of attention.”

A critic and translator living in the Silesian city of Opole, Tomasz Różycki has published nine books since the mid-1990s, most notably 2004’s book-length Twelve Stations and 2006’s Colonies—both of which are multiple award-winners. His work has been translated into six languages and he is a jury member of the Koscielski Prize (Lausanne) and Prix du Jeune Ecrivain (France). 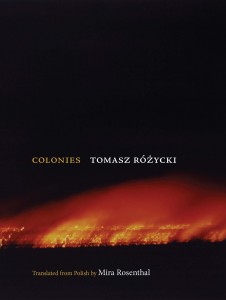 Mira Rosenthal’s 2013 English translation of Colonies was also long-listed for the 2014 PEN Poetry in Translation Award, shortlisted for both the Griffin Poetry Prize and the Oxford-Weidenfeld Translation Prize (UK), and won the Northern California Book Award for Poetry in Translation. Różycki has also been nominated twice for the NIKE Prize (2005 & 2007), and once for the Paszport Polityki, Poland’s top literary award.

Lilburn says he first ran across Colonies at a Seattle book store in 2013 and was immediately captivated. “I thought, ‘Whoa—what’s this?’,” he recalls. They then met at an international poetry festival in Hong Kong. “I was really impressed by him,” Lilburn says. “He seemed to be a perfect fit for us here at UVic. There’s also a lot of interest in his visit by the local Polish community as well.” 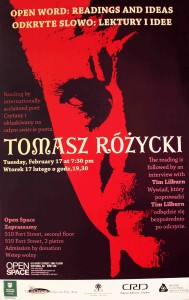 During his February 14 to 20 week on campus, Różycki will be meeting with faculty, students and the local poetry community, as well as doing a number of readings. First up is his appearance at the long-running Open Word: Readings & Ideas series at 7:30pm Tuesday, Feb 17, at Open Space (510 Fort, by donation). Following a reading of his work—in Polish, followed by English translations (“his English is serviceable, but the translations are lovely,” says Lilburn)—who will also conduct a live interview with Różycki after the reading.

Różycki’s next presentation is with the Department of Germanic & Slavic Studies, speaking on “History and Memory in Eastern European Cultures” at 3:30pm Thursday, Feb 19 in Clearihue C112. “His family comes from Eastern Poland, and most were uprooted after WWII and transplanted into Silesia while Germans were moved further west,” explains Lilburn. “That was his parent’s and grandparent’s generation, but it really shapes his work; you can tell he’s afflicted with nostalgia.”

Finally, Różycki will present an Orion Lecture for the Faculty of Fine Arts on “Post-war Polish Poetry (or, To Write a Poem After the End of the World)” from 3 to 4:30pm on Friday, Feb 20 in room 103 of the Fine Arts Building (free, all are welcome).

“It’s good to bring international poets of this prominence to the city,” concludes Lilburn, himself an internationally recognized poet of note. noting the 2009 visit by renowned Chinese poet Xi Chuan as one of UVic’s Visiting Scholars. “We’re all quite excited about his visit.”