Building a future in heritage conservation

Some students have the architecture of their academic path laid out from the start; others see it more as ongoing renovations. Put Genevieve Neelin in the latter category. This year’s winner of the Victoria Medal—awarded annually to the student with the highest GPA in the Faculty of Fine Arts—willingly admits university wasn’t originally a big part of her life plan. 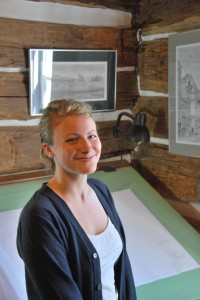 “I’m someone who never thought they’d even get an undergraduate degree,” says the soft-spoken 25-year-old. “I was working in coffee shops, thinking one day I’d open a coffee shop of my own—that was my highest aspiration—and then I started at UVic and somehow magically got really high marks. I don’t know how that happened.”

Hard work and a keen interest in her studies is the shortest explanation for Neelin’s success. “It was all about focus,” she says. “I never stopped; I didn’t even take a summer off. But I also took a couple of years after high school to really think about what I wanted to do, so when I came to UVic I was really focused. My number-one job was to do well in school.” Of course, it helps that she graduated from her Quebec high school at 16, which gave her an extra two years to work out her priorities.

An honours student in the History in Art department, Neelin showed real devotion to her studies in architecture and architectural conservation—success with which she credits both to the faculty and her family. After originally starting in visual arts, Neelin cites associate HIA professor Christopher Thomas with determining her current passion. “His course on sacred structures—from Stonehenge to the Crystal Cathedral—was a huge influence in making me decide to go into the field.” As for her family, she’s worked as a draftsperson with her father’s Ottawa-based home design firm for seven years now. “You can see how heritage conservation would tie into the family business.”

She pauses and chuckles. “So I’d like to thank my parents for making me read as a child; I guess I have a natural gift.”

Neelin is already busy back home at the drafting table, and her immediate plans involve pursuing a master’s at Ottawa’s Carleton University. “It will largely be focused on government policy in heritage conservation,” she explains. “Because I have a background in design, I’m hoping that I can combine those and do some restoration work myself. It’s definitely a growth industry.”

Has her view on cities changed now that she’s formally studied architecture? “It has, especially because I’ve been looking at modern architecture recently. Walking down the street is so much more interesting now; a lot of buildings I thought were just ugly before I’m now seeing differently.”

And did she have a favourite building here at UVic? “The Fine Arts building,” she concludes with a laugh. “I pretty much lived there.”

Note: this piece originally appeared in June 2012 convocation issue of The Ring.