Requiem for a Glacier

It’s a summer story to melt even the iciest of hearts. Back on July 27 & 28, Visual Arts professor and composer Paul Walde, accompanied by an orchestra and crew of nearly 100 people, trekked to the Farnham Glacier in the Kootenays to perform the site-specific sound performance Requiem for a Glacier for an audience of one: the glacier itself. 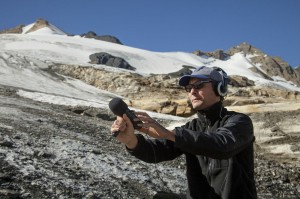 “This project marks a continuation of my studio research in which I explore interconnections between landscape, identity, and technology, amplifying cultural gestures in order to reveal their place within nature and conversely, by capturing natural events through cultural apparatii,” explains Walde.

Commissioned by Kaslo’s Langham Cultural Centre, the performance was the basis of a new video work that will be the cornerstone of an installation scheduled for October 2013; it will also appear at Nelson’s Oxygen Art Centre in early 2014. The installation will include the history of the glacier, the advent of electricity and climate change, and the government’s announcement of a year-round recreational development and resort community in the Jumbo Glacier area, all summed up in a four-movement operatic work. 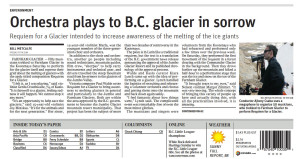 As Vancouver Sun writer Bill Metcalfe noted in this July 29 article, “Victoria composer Paul Walde wrote Requiem for a Glacier to bring awareness to melting glaciers in general and particularly to the Jumbo and Farnham Glaciers. Both are within the area approved by the B.C. government to become the Jumbo Glacier mountain resort municipality. That project has been the subject of more than two decades of controversy in the Kootenays.”

As with traditional requiems, Walde’s composition is in Latin . . . the twist, however, was in the translation: the lyrical source material is the B.C. government’s own news release announcing its approval of the proposed Jumbo Glacier Resort, as well as the published chronology of the approval process. 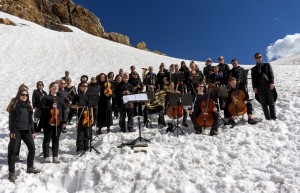 Csaba conducts the Requiem, with the Jumbo glacier in the background (photo: Pat Morrow)

School of Music professor and UVic Symphony director Ajtony Csaba conducted the 40-person choir and 30-person orchestra, while Walde oversaw the entire production and supervised the documentation of it all. Describing conductor Csaba as “a striking sight, conducting on the glacier wearing traditional concert-hall conductor’s garb,” the Vancouver Sun noted that he had the double challenge of working not only with “a group of musicians unfamiliar with each other and at differing experience levels” but also dealing with “the special difficulties of outdoor large-group performances.”

“It was a challenging situation,” Csaba told the Sun, “because it was hard for them to hear each other. It was a diffuse acoustical environment. But it was fantastic. I have never experienced anything like this, to perform on snow. It was a very interesting and great experience.” 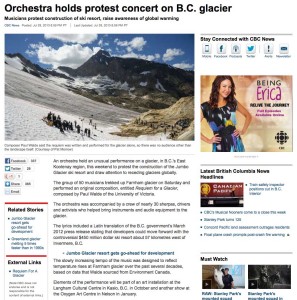 Requiem garnered an impressive amount of media attention—but not just locally. The idea of hiking a 50-person orchestra (plus instruments) along with a film crew, sound technicians, mountain guides and volunteer “sherpas” to help carry all the gear seems to have caught on worldwide. The story was covered in numerous media outlets, including the front page of the Vancouver Sun, on CBC News, New York’s Classicalite music blog, the Cranbrook Guardian blog, Yahoo! News, as well as the German RP Online (“Ein Requiem für einen schmelzenden Gletscher”) and the Asian WorldJournal.com (“抗議開發案 50音樂家登冰河演奏”).

Not all the coverage was enthusiastic, however. The Columbia Valley Pioneer featured a story “Local Skier Not Impressed by Requiem”, and the right-wing American blog FrontPage Magazine (subtitled “Inside Every Liberal is a Totalitarian Screaming to Get Out”) which published an op-ed piece called “Global Warming Orchestra Travels North to Play for Glacier”: “Tree Hugging is so 1980s. Get ready for Glacier Hugging,” they quipped. “If only people would wake up and stop destroying the environment to play music to melting glaciers.” 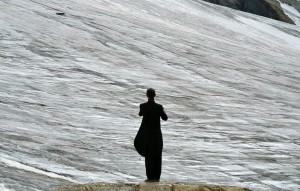 Playing for a chilly audience of one (photo: Pat Morrow)

Requiem for a Glacier will also be the subject of a documentary film, which will extend the reach of this work and the issues it is exploring. You can help support this project by visiting their Indiegogo campaign. As the project description notes, “Requiem for a Glacier provides a cultural perspective into one of the biggest ecological issues of our time: global climate change and how it relates to the Kootenay region and the highly contentious Jumbo Alpine Resort. Located in the Purcell Mountain Range in eastern British Columbia, Jumbo or Qat’muk, is a range of five glaciers that have been spared some of the environmental degradation of other glaciers due to their high altitude. However with continued global warming, this geographical advantage will soon be lost, and in fact, these glaciers are already in retreat.” 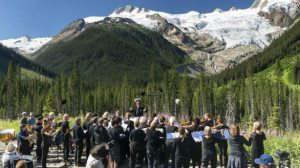 Csaba conducts the Requiem, with the Jumbo glacier in the background (photo: Pat Morrow)

“To compound matters, a $1 billion resort proposal has recently been approved by the provincial governmental. As Professor David Schindler of the University of Alberta warns, ‘Ski lifts and skier traffic on the surface of Jumbo Glacier will hasten its melting, and compromise one of the important headwater sources of the Columbia River system.'”

“In both the Columbia and Kootenay communities bordering the Purcell Mountain range, approximately 80% of residents are opposed to the approval of the resort.  In fact, the majority of citizens who live in the region are outraged and saddened by the continued development of our remaining wild spaces. The proposed development area provides key habitat for grizzlies and important other wildlife species and is sacred to the local Ktunaxa Nation who have declared themselves, ‘expressly opposed to the Jumbo Glacier Resort.’ In November 2011 the Ktunaxa Nation was joined by hockey legend Scott Neidermeyer in the Provincial legislature to present the Qat’muk Declaration, which outlines the sacred significance of this area.”