It’s shaping up to be quite the year for Department of Visual Arts professor Sandra Meigs. Hot on the heels of being named one of eight recipients of the Governor General’s Awards for Visual and Media Arts in March 2015—an honour that saw her work featured in a special curated exhibit at the National Gallery of Canada this past summer—she has also just closed All to All, her most recent solo exhibit of new work, at Toronto’s acclaimed Susan Hobbs Gallery. And now, Sandra Meigs has been announced as the winner of the $50,000 Gershon Iskowitz Prize at the AGO for 2015. 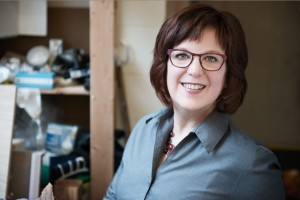 “When I got the call about the prize I was at a rest stop on the 401 on my way to London, where I was going to do grad visits at Western,” Meigs explains from Ontario. “I’m told I said ‘I can’t believe it’ four times. The news just seemed to have dropped out of the sky as some sort of magical gift and settle into my GPS as the next stop on my way.”

In addition to the cash award, the Gershon Iskowitz Prize comes with a solo show at the Art Gallery of Ontario and a further $10,000 towards a publication on Meigs’ work.

“The Gershon Iskowitz Prize recognizes artists who have made a significant contribution to the field of visual arts in Canada,” notes Dr. Susan Lewis, Acting Dean of the Faculty of Fine Arts. “The Faculty congratulates renowned painter Sandra Meigs on this latest career achievement. Her creative body of work has a tremendous impact and influence on the contemporary visual arts scene. Her art informs her teaching and mentorship of students in our Faculty. The Fine Arts student experience is distinguished by the expertise and commitment that she brings to fostering a dynamic learning environment here at UVic.”

Describing winning the award as “a career highlight,” Meigs says the timing for it is ideal. “It couldn’t come at a better time for me since All to All took me two years to complete. And I am now ready and fresh to start something anew.”

“All to All”, the latest solo exhibit by Sandra Meigs

News of Meigs’ prize win was picked up by the Globe and Mail, CBC News, Canadian Art magazine, the Times Colonist and CBC Radio’s All Points West.

Adding to the surprise of the announcement is the fact that artists do not apply for this prize. “I was blown away,” she admits with a laugh. “There was no nomination process—the decision was made by a curator, two Iskowitz Foundation trustees, and an artist from the Canadian arts community who agreed unanimously on their choice. The prize is given in recognition of, but also to further, an artist’s career—particularly an artist who is at a crucial turning point in advancing his or her work.”

The jury consisted of curator Lesley Johnstone, art collector Jay Smith, curator/critic Sarah Milroy and former Visual Arts student and 2014 Governor General’s Award winner Kim Adams. In a statement, Johnstone described Meigs’ work as “comical and sad, materially rich and socially engaged, psychologically intense but also somehow playful, her work continues to surprise us with each new project. Hers is a unique voice and her influence within the Canadian art milieu is strongly felt.”

For her part, Meigs is relieved the solo AGO exhibit won’t be mounted until 2017, given her recent focus on All to All, which she describes as “a very intense and joyful work.” 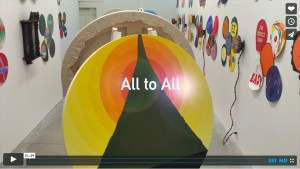 Watch this video of Sandra Meigs’ latest solo exhibit, All to All

“I’ll have two years to develop the new work for the AGO exhibition and I’m not sure right now what I will make,” she admits. “I know I’ll be keen to start as soon as I get back home. And having the AGO as a venue will also give the work a huge boost, not only because it will afford it a large space to show in—for which I have been yearning for some time—but also because my ‘fan base’ is in Toronto so I can not only show to them, but also reach out to a huge audience of AGO gallery viewers who might otherwise not get to know my work.”

Sandra Meigs’ work has been described as expressive, eclectic and interdisciplinary; her paintings are known for their unique approach in combining complex narratives with comic elements in large scale works such as The Basement Panoramas and Strange Loop. She is dedicated to painting and refers to the possibilities of enchantment that painting presents through colour and form. For Meigs, the very authenticity of one’s experience offers proof that what is imagined when looking at a painting is as real as anything else that one experiences in the world. In addition to painting, she has also woven sculpture, film, sound, and other media in her works.

As for the prize money, Meigs says she’ll use it to fund the pieces for the AGO exhibit. “New work always ends up costing a lot to produce, whether it’s research travel, studio costs, production materials, or for services one needs at various stages of the production.” 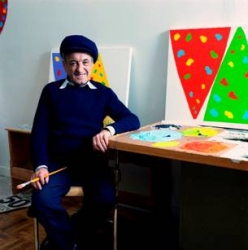 Meigs also has high praise for the prize originator himself. “Canadian painter Gershon Iskowitz had the foresight to create this prize and the AGO to oversee its mandate,” she says. “Perhaps I will someday be able to leave such a legacy. I follow in the footsteps of so many great artists who have received this prize and I am extremely grateful.”

The Gershon Iskowitz Foundation joined with the AGO in 2007 to raise awareness of the visual arts in Canada. Canadian painter Gershon Iskowitz (1921-1988) recognized the importance of grants to the development of artists and acknowledged that a grant from the Canada Council in 1967 enabled him to formalize his distinctive style. The AGO is home to the artist’s archives, which include early works on paper, sketchbooks and ephemera, and holds 29 paintings by Iskowitz, spanning from 1948 to 1987, in its permanent collection.