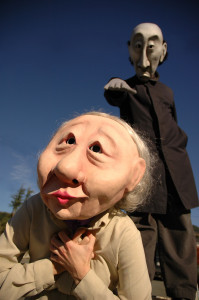 Who doesn’t love Grim and Fischer?

Braidwood—co-artistic director of the WONDERHEADS theatre company—is an actor, deviser, teacher, director and a professional mask maker. She’s the one responsible for the giant creations used in WONDERHEADS’ work and whose masks are used on stages, in films and in classrooms around the world. As an actor she has performed nationally and internationally, including credits with Portland’s Miracle Theatre, locals Theatre SKAM, California’s Dell’Arte Company and Four on the Floor, and Japan’s Furano Natural Studio, among others.

After graduating from Phoenix with an acting BFA, Braidwood went on to earn an MFA in Ensemble Based Physical Theatre from Dell’Arte International School of Physical Theatre, where she trained as an actor-creator, studying the development of original, physically driven work in ensemble. It was at Dell’Arte that her passion for mask was truly ignited and developed, during which time she trained in the Italian form of Commedia Dell’Arte, studied mask design with Bruce Marrs, worked with Berlin-based mask company Familie Flöz, and created her own thesis project in the style of larval mask. Committed to developing joyful, sublime and truly magical work for the stage, she teamed up with another Dell’Arte graduate, Andrew Phoenix, to create the WONDERHEADS in 2009.

Grim and Fischer is a new dish made of old ingredients. It is performed in full-face mask—a wordless, whimsical form rarely seen on North American stages which audiences have described as watching a living cartoon or “live-action Pixar.” When Death comes to visit Mrs. Fischer, this tenacious granny isn’t ready to breathe her last, resulting in multi-award winning physical theatre comedy that confronts important questions like, what is it to know your end is nigh? Can you escape death? And can you hit death in the face with a frying pan and get away with it?