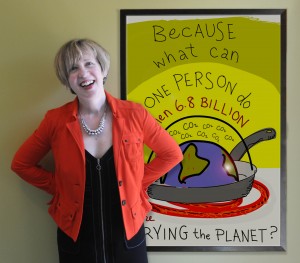 In a class by herself: 1981 MFA Franke James stands in front of one of her own pieces

Artist, writer, environmentalist and recent thorn in Prime Minister Stephen Harper’s side, Franke James, is profiled in the Autumn 2011 issue of the alumni mag, The Torch. One of the first two graduates of UVic’s MFA program way back in 1981, James has made something of a name for herself since 2007 with her unique fusion of artistic and environmental concerns as seen on her website, My Green Conscience—but, most recently, as a result of the  Federal government blacklisting a planned European art tour blasting the ongoing Canadian tar sands development.

Following her personal motto of “doing the hardest thing first,” James took the story of her blacklisting to the media, threw a high-profile “blacklisting party” and put up billboards and bus shelter ads denouncing the government’s action. “The government usually does this with Environment Canada scientists who can’t speak out without losing their jobs,” she says, “but I can speak out, and I’m going to use every creative tool I have to challenge this blacklisting.”

And while she originally came to campus in 1979 to work with inspirational Visual Arts prof Mowry Baden, James readily credits UVic’s MFA program for the range of resources in her personal toolkit: “Creative thinking, learning to speak your mind using visual language, and being able to judge the impact of your creative effort —and both critique it and withstanding criticisms, and then come back with new solutions—that’s what came with my MFA. It makes you very resilient.”

Despite Canada’s recent environmental backsliding, James remains surprisingly optimistic about the future. “Look at smoking and garbage,” she chuckles. “There are fewer people who smoke now and pretty much everyone knows that smoking causes lung cancer. And back in 1979 we threw everything into garbage cans, while we now sort it into different containers for recycling. Those are wonderfully optimistic examples of change that can happen in a relatively short period of time.”

When it comes to causing change on either a local or global level, Franke James feels it all comes down to using the tools you know best. “Andy Warhol said to paint what you love, but I say paint what you want to change.”