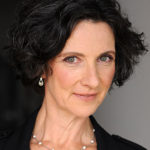 It’s an ironic contradiction of the human condition that the only thing as timeless as war is our simultaneous desire for peace. Sadly, this makes Phoenix Theatre’s mainstage production of Trojan Women as current as when it was first performed in 415 BCE.

“The play is as relevant as this morning’s Twitter feed,” says director and Department of Theatre professor Jan Wood. “Turn on the news and you’ll find another instance of Trojan Women being played out in the world.”

Running from February 14 to 23 (with previews Feb 12 & 13), Euripides’ tragedy follows the perspective of the wives, mothers and daughters of the defeated Trojan warriors as they struggle with grief, uncertainty and, ultimately, courage while their fates are decided by the conquering Greeks. 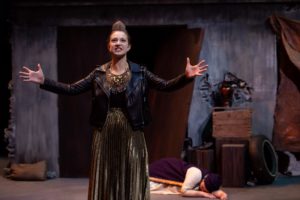 “I like to think art has the power to change things, but this play proves that it hasn’t,” admits Wood. “If we’re not learning the lesson that war is bad, then it must be teaching us how remarkable our ability to survive is.”

Apart from Wood and movement director Treena Stubel, who is both a Phoenix alumna and current instructor with Theatre, this production of Trojan Women is firmly in the hands of the next generation of theatre artists, thanks to the 27-person all-student team of cast, crew and designers. “They know what’s happening in the world. They’ve seen the images and they’ve incorporated the power of that loss into the piece,” says the director. “Young people today are at the forefront of enacting real change in the world. Our survival depends upon it.”

Wood feels the intentionally timeless war-torn set and costume design helps the nearly 2,500-year-old play feel current for today’s audiences. “When I see those boatloads of Syrians coming onto the shore, I think about refugees wandering with no destination, being forced out by war,” she says. “One of the things I’ve tried to do with this production is talk about the resilience of the human spirit, and its ability to move forward: how do we go on when our families have been devastated? How do we walk forward into the future? How do we survive?” 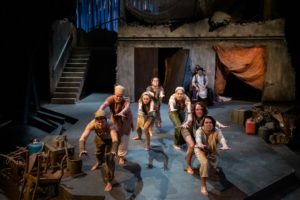 The women of Troy lament their fate (photo: Dean Kalyan)

A performance professor with Theatre since 1996, and an accomplished actor and director in her own right — many will recognize Wood from her on-stage work at the Belfry, Blue Bridge Theatre, Bard on the Beach or the Stratford Festival — this show actually marks Wood’s directorial debut at the Phoenix.

“I am definitely an actor’s director,” she says. “I try to create an atmosphere where people have the freedom to create and follow their instincts. Theatre is a collaborative art form: during rehearsals, the more my actors feel comfortable giving, the more I have to work with, and the easier my job becomes. After all, that’s why we got into this business—because we have instincts, a creative desire and a passion, and we need to trust that.”

Ultimately, however, Wood feels the real impact of Trojan Women shouldn’t be felt on the stage. “As the audience, we bear witness, not only to lives lost but to the capacity of humanity to move forward in times of great darkness.” 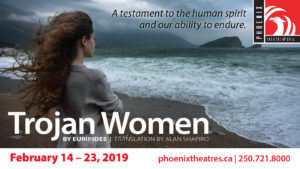 The public is also invited to a free pre-show lecture by Dr. Laurel Bowman of UVic’s Greek & Roman Studies department at 7pm Friday, February 15, where she will discuss how the play would have been originally received by an Athenian audience of largely military personnel who were in the middle of a 30-year war between Athens and Sparta.