What else happened in Fine Arts in 2017? More than we can mention in one blog post, so here’s part two of our top-10 stories of the year.

Considering we’re based on an island at the edge of the continent, it’s surprising how much international attention UVic continues to get — and while there’s no arguing our extraordinary sense of place here in Victoria, credit must go to our exceptional faculty who always seem to be busy across the country and around the world. 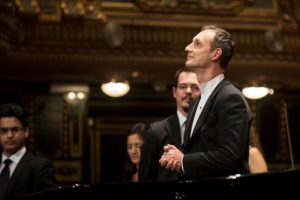 School of Music professor Dániel Péter Biró and some Music students participated in UVic’s interdisciplinary field school “Narratives of Memory, Migration, and Xenophobia” this summer, which brought together scholars, students and artists from Canada and Europe to examine issues including the recent resurgence of nationalist and xenophobic movements in North America and Europe. Biró also had a number of compositions commissioned, premiered and performed in Europe this year, as well as in Brooklyn. Ajtony Csaba was honoured to perform a special Canada 150 concert for the Hungarian Ambassador in Ottawa this summer, as well as having the opportunity to lead the orchestra at the Hungarian Liszt Academy of Music this fall. Merrie Klazek presented a solo recital at the International Women’s Brass Conference in New Jersey in June, Joanna Hood was featured on German radio this fall, and Benjamin Butterfield appeared once again at the Amalfi Coast Music Arts and Music Festival, teaching and directing the opera Gianni Schicchi with some of his UVic voice students, past and present (including Kaden Forsberg, Margaret Lingas, Ai Horton and Nick Allen).

Visual Arts professor Kelly Richardson saw her art exhibited in solo and group exhibits in Scotland, England, France, China and the United States this year, while Paul Walde had two separate exhibits on view in Norway and Scotland, and Cedric Bomford had work in California, as well as an ongoing public art commission in Seattle. And sessional instructor Charles Campbell had work exhibited at both the Los Angeles’ Museum of Latin American Art and San Francisco’s Museum of the African Diaspora this year. 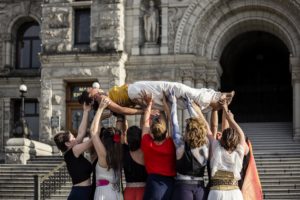 Considering the City of Victoria declared 2017 a Year of Reconciliation, it was perhaps fitting that we saw a great deal of activity by Indigenous alumni, guest speakers and faculty — most notable of which was the announcement that Visual Arts MFA alumna Lindsay Delaronde would be Victoria’s first Indigenous Artist in Residence. “I hope to create artworks that reflect the values of this land, which are cultivated and nurtured by the Indigenous peoples of this territory,” she said at the time. “I see my role as a way to bring awareness to and acknowledge that reconciliation between Indigenous and non-Indigenous peoples is a process, one in which I can facilitate a collaborative approach for creating strong relationships to produce co-created art projects in Victoria.”

2017 also saw the completion of Rande Cook’s two-year term as the latest Audain Professor in Visual Arts — on top of his duties as chief of Vancouver Island’s ’Namgis Nation and his commitments as an in-demand contemporary artist with an international practice. “Two years in the position allowed me to really reach students,” says Cook. “I was able to delve into the role art plays in politics, and got them to dive deep within themselves. I pushed my students a lot and they seemed to appreciate that — the feedback at the end of the year said it was one of the more profound classes they had ever taken.”

The call is currently out for the next Audain Professor, with a January 31 application deadline.

Theatre professor Kirsten Sedeghi-Yetka continues her applied theatre work in the area of Indigenous language preservation, and Theatre also hosted acclaimed Indigenous playwright Marie Clement as a guest this fall. AHVS professor Carolyn Butler-Palmer‘s 2017 Legacy Gallery exhibit on early female Indigenous carver Ellen Neel was featured in this national Globe and Mail article, Legacy Gallery also hosted an exhibit by Visual Arts MFA alumna Marianne Nicholson focusing on the impact of smallpox on local first nations, and fellow Visual Arts MFA Hjalmer Wenstob had a high-profile longhouse installation on the lawn of the BC Legislature this summer as part of the OneWave Gathering.

High-profile Indigenous Writing alumni Richard Van Camp and Eden Robinson were in the news repeatedly this year, with Robinson being shortlisted for the Giller Prize and winning a prestigious Writers’ Trust Fellowship. And everyone in Writing and Fine Arts were saddened to hear of the passing of former Southam Lecturere, Richard Wagamese. 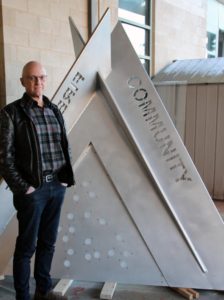 Visual Arts faculty had a busy year with a number of prominent exhibitions and projects. Paul Walde’s Tom Thomson Centennial Swim project received a great deal of local, provincial and national media attention this summer — with 10 different radio interviews and day-of coverage by the Toronto Star — as well as making UVic’s list of top news stories of 2017.

The spotlight was definitely on the recently retired Sandra Meigs — now professor emeritus — who was named a Fellow of the Royal Society of Canada in September, opened a solo exhibit at Winchester Galleries early in 2017 featuring work created after winning the Gershon Iskowitz Prize, and launched an impressive solo show at the Art Gallery of Ontario in October, in collaboration with Music’s Christopher Butterfield. Listen to this interview with Meigs on CBC Radio’s Q, in which Butterfield’s audio component is also discussed.

Daniel Laskarin debuted a new public art sculpture at the Cambie Fire Hall No. 3 / Richmond North Ambulance Station and had a local solo show at Deluge Gallery, while Robert Youds had no less than three solo exhibits this fall, with two in Victoria and one in Toronto. Cedric Bomford had his work on view in California, Quebec and Toronto’s Nuit Blanche this summer, and very busy new professor Kelly Richardson participated in 14 solo and group exhibitions across Canada and Europe — with more planned in 2018. 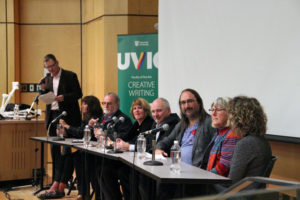 The stage may have been crowded, but not as much as the audience!

For the past 10 years, Writing students have benefited by learning from veteran journalists and authors, thanks to the Harvey Stevenson Southam Lecturer in Journalism and Nonfiction. In November, Writing celebrated a decade of Southam Lecturers with a special “all-star” anniversary panel featuring six former Southams together for the first time, in a lively moderated discussion on “The Future of Journalism in the Age of #FakeNews”

“The idea for the panel was sparked by a perfect convergence,” says Writing chair David Leach. “A chance to mark the 10th anniversary of the Southam Lectureship, the opportunity to thank the Southam family for their generosity, and to respond to a sense of global urgency around the role of journalists as guardians of our democratic institutions — especially when the most powerful elected official on the planet keeps attacking the free press as #FakeNews.”

“All were keen to talk about their experiences as guest lecturers and debate the future of journalism,” says Leach. “Taken together, it offers a broad range of ways to look at contemporary journalism.”

A strong year for new donors 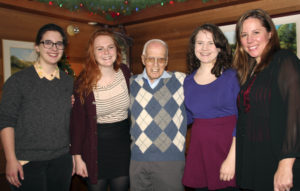 Another way to measure a faculty’s health and success is through the strength of its donors. And while Fine Arts couldn’t boast of another monumental donation like the one we received in 2016 from Jefferey Rubinoff — who sadly passed away earlier this year — 2017 remained a healthy year for donors and donations. Fine Arts Development Officer Samantha Krzywonos reports that we attracted 103 first-gift donors this past year — as compared to 48 in 2016 — and received an overall 476 donations for a total of nearly $500,000 that will support students.

Donations of all sizes are essential not only for scholarships and awards, but also for the need for innovative technology, space modifications and equipment upgrades — all of which contribute to the success of Fine Arts students in all our departments. Donors can range from alumni and retired faculty to parents of students, corporate partners, arts patrons, current and former staff, and community members. Indeed, we currently have over 250 active donors and nearly $10 million in planned gift expectancies invested in Fine Arts students.

Krzywonos feels meeting with donors is the most rewarding aspect of her job. “It’s all about saying thank-you and sharing the impact of that support. If a student can focus on their studies and not have to take on extra work just to get by, that donor support can make a huge difference in their life.”