When it comes to hands-on learning and real-world experience, it’s hard to top the Department of Writing’s film production course, Writing 420. An integral part of UVic’s interdisciplinary Film Studies program, this popular course sees students create a short film from an original script, and involves them working on all aspects of the production: from lighting, sound and camerawork to editing, costumes and everything in-between. 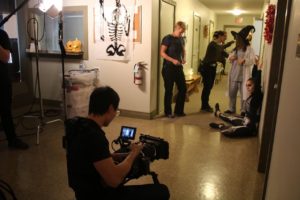 Thanks to a new annual donation from the estate of Dorothy May Kelly and the Victoria Foundation, we can continue to support original filmmaking in the spirit of the public television networks that Dorothy so loved. This new fund will make a difference for years to come.

Led by award-winning filmmaker and Writing professor Maureen Bradley, Writing 420 students have made seven stand-alone short films and a 10-episode web series since 2009, which have been screened—and won awards—at a number of film festivals. Graduates have gone on to work in the film industry and develop their own independent film projects.

“We get the script in as best shape as possible before we go to camera,” says MFA alum, course instructor and professional filmmaker Connor Gaston of the process. “Then it’s about working with your key creatives to try and create a cohesive visual style and tone.”

By offering a variety of perspectives on film studies and screenplay writing, and by providing students the chance to hone their analytical skills and production techniques on an actual project, Writing 420 develops a critical appreciation of film culture in both historical and social contexts.

It also provides students with the satisfaction of seeing their finished work on the big screen at the likes of the Victoria Film Festival and UVic’s own student film festival, Sunscreen.