Richard Wagamese on the power of stories

Richard Wagamese believes in changing the world, one story at a time. 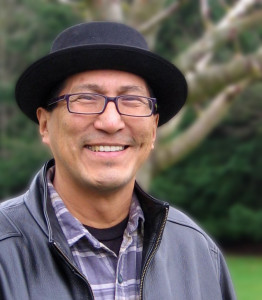 Want to change the world? According to Ojibway author and journalist Richard Wagamese, it’s easier than you think—all you have to do is talk to your neighbour.
“It’s an elemental thing,” he explains. “The boundaries and perceived limits of your world change when you stop and talk to another human being. When you exchange stories—where you came from, how you got there, how your life is going—the addition of that one story to your reality changes your world.”

Seem too simple? For Wagamese, that’s the beauty of it. “It’s not a huge undertaking, it’s not an enormous task or a quest,” he says. “It’s just talking. If you multiply that exponentially over seven billion people, where everyone is sharing one story with each other, the number of strangers in the world shrinks by the same process—you actually affect change by sharing stories.”

As part of his duties as the Department of Writing’s fourth annual Harvey S. Southam lecturer, the 55-year-old multiple award-winning Kamloops resident is not only passing this simple wisdom along to his UVicstudents this semester but he’s also holding a public lecture on February 16—titled, not surprisingly, “The Power of Stories”—where he’ll be launching his seventh book and latest memoir, One Story, One Song (Douglas & McIntyre). The follow-up to his acclaimed One Native Life, one of the Globe and Mail’s top-100 books of 2008, Wagamese describes One Story “as a book of reflections on the people, places and events that have shaped the man I am at 55.”

But One Story is only one of four books Wagamese is releasing in 2011. Also on deck are Indian Horse, a novel; Runaway Dreams, his first collection of poetry; and The Next Sure Thing, a story for Orca Books’ “Rapid Reads” difficult readers series. (When asked about Indian Horse, the author says “it’s about residential school, hockey and healing . . . and a pink elephant named Oscar who loves radishes.” He pauses, gives me a serious look to see if I’m buying it, then breaks out in a loud, long laugh. “No, no elephants,” he chuckles. “Just the hockey, healing and school.”) Add in his ongoing newspaper column and radio work, as well as his new teaching duties, and you’ve got a schedule that would seem daunting for any writer—but Wagamese seems nonplussed by it all.

“It’s like I tell my students—I’m a working writer, and I’m really happy with that,” he says. “I have a deadline every week, I have a course to teach, I have speaking engagements . . . as much as it seems kind of incredible, it doesn’t strike me as odd because it’s what I’ve worked towards.”

When asked how his background as member of the Wabaseemoong First Nation in Northwestern Ontario has factored into his success as a writer, Wagamese pauses before replying. “Well, it was through the grace of Creator, and the love and nurturing of my own tradition,” he explains. “I don’t have a degree, so I didn’t follow the established path to becoming a writer. But at one point in my mid-twenties, I asked traditional people why I didn’t have a role in our circle—why I wasn’t a hunter, a trapper, a carver, a drummer, a singer, a dancer, a fisherman. They listened to me tell my story about where I’d been, what had happened to me and how I found my way back home, and they said, ‘Well, the way you told that, you’re supposed to be a storyteller.’ And that amazed me.” 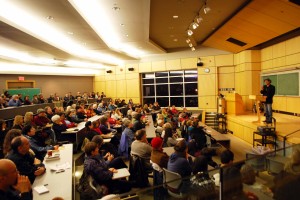 Thus began a process of traditional training that, along with 30-plus years of what he describes as “discipline, dedication and commitment,” has now led him here to UVic. “Everybody sees four books in one year and they think it’s incredible, but there’s a lot of stuff underneath the surface that makes that happen,” he says. “And that’s what I try to get across to my students—all of this becomes possible by virtue of the amount of initiative and determination you put into it.”

Ultimately, Wagamese feels the power of stories is inherent in every culture. “It speaks to something we all share, regardless of background,” he says. “We all carry a yearning to be heard. Everything we do from the time we gain the ability to recollect offers a story. And we need to remind each other that’s the truth of who we are as human beings; we’re hardwired to tell stories.”