There’s no easier measure of just how creative the activity is here in the Faculty of Fine Arts than by looking back at what happened over the previous year. From classes and guest lecturers to concerts, exhibits, plays, readings, seminars and our core research and creative practice, it’s often hard to believe just how much happens in a given year. In fact, a recent tally of this year’s media coverage showed our faculty, students and alumni had been covered more than 250 times in 2017 — and those are just the stories we know about.

In no particular order, here’s part one of our annual wrap-up featuring some — but certainly not all — of the leading Fine Arts stories of the year. 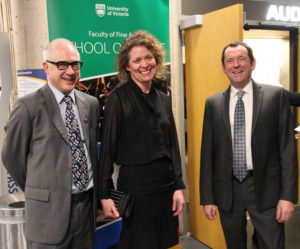 2017 saw the wrap-up of 50th anniversaries in both Theatre and Art History & Visual Studies, and the ongoing half-century celebrations in the School of Music. Theatre completed its celebrations with a trio of final events in the spring: their Human Library Project, the Tempest Orion Project, and the public mounting of A Queer Trial, a brand new play by professor Jennifer Wise, in downtown’s Bastion Square. “The people who started our department were fearless in their vision and commitment,” Theatre chair Allana Lindgren said at the time. “They transformed one of the old military huts on campus into a stage and that ‘can do’ attitude has never left.”

AVHS finished their golden anniversary year with a public panel on “Why Art Matters in Dangerous Times” and their extensive Learning Through Looking exhibit at the Legacy Maltwood Gallery. “We were pioneers in the field when we were founded 50 years ago — not just in Canada but across North America,” noted department chair Erin Campbell of what was then the History in Art program. “At the time, art history was very Western-focused but we were one of the few institutions willing to look at Asian and Indigenous art. And we are still one of the largest world art history departments in Canada.”

While the School of Music just wrapped up its own 50th gala and reunion weekend earlier in December, they’ve still got their New Music & Digital Music Festival coming up from February 2-4. Music director Christopher Butterfield feels it’s their unique connection between faculty, students, alumni and the community that sets the School of Music apart. “We’re never going to be the place for everybody, but the people who do come here soon realize we’re punching way above our weight,” he says.

With three anniversaries down and two to go — including the Faculty’s own 50th in 2019 — it’s not hard to see the impact Fine Arts has had on the evolution of UVic itself, which is currently only 54 years old. 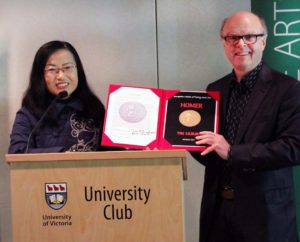 It’s been another year of outstanding achievement for our faculty, with a number of notable recognitions. Department of Writing professor and acclaimed poet Tim Lilburn was the first Canadian to win the prestigious international Homer Prize, while School of Music professor Dániel Péter Biró earned a coveted Guggenheim Fellowship, and Visual Arts professor emeritus Sandra Meigs became a Fellow of the Royal Society,

Internally, AHVS professor Victoria Wyatt won the Fine Arts award for Excellence in Teaching, while School of Music professor Suzanne Snizek‘s research into the forgotten works of suppressed composers earned her a place among the 10 recipients of UVic’s inaugural REACH Award, alumna Althea Thauberger was honoured as the faculty’s 2017 Distinguished Alumni, and POV Maestro Timothy Vernon being named an Honorary Doctor of Music at spring convocation.

Fine Arts saw exceptional success in 2017 when it comes to the research and creative activities of our current doctoral and graduate students. Art History & Visual Studies had three successful SSHRC doctoral recipients — international students Atri Hatef and Hamed Yeganehfarzand and Zahra Kazani — which, considering only 20 were awarded to UVic as a whole, makes AHVS responsible for a remarkable 15 percent across campus in this category. Kazani also holds a CSRS Fellowship, as well as the Sheila & John Hackett Research Travel Award and a top-up to assist with international research at the Warburg Institute and the Wellcome Collection and Library, both in London. 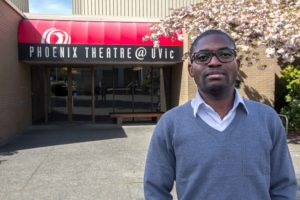 Additionally, we’ve had great success when it comes to Canada Graduate Scholarships – Master’s Awards, with three CGS M’s in AHVS, two in Writing, and one each in Visual Arts and the School of Music. With seven out of 36 awards on campus, Fine Arts earned an impressive 19.5 percent of UVic’s allocations. Two other high-achieving graduate students include AHVS’s Su Yen Chong, another CAPI Crossing Borders Queen Elizabeth Scholar, and Elsie-May Mountford, the Ian H. Stewart Graduate Student Fellow with UVic’s Centre for Studies in Religion and Society. 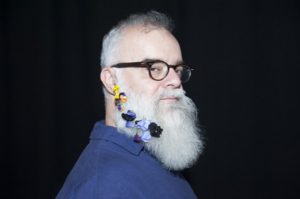 It’s also worth noting that 2017 has been a remarkable year for alumni achievement. In November, School of Music alumnus Rodney Sharman received the Canada Council’s $50,000 Walter Carsen Prize for Excellence in the Performing Arts, while composer Tobin Stokes saw one of his compositions performed for Queen Elizabeth II as part of the Canada 150 celebrations in London this summer, sung by alumna soprano Eve Daniell. Several School of Music alumni are featured in the 10-CD Canadian Composers Series on the UK’s Another Timbre record label — including the likes of Cassandra Miller, Alex Jang and Lance Austin Olsen — which also comes with an accompanying book. And Musicworks magazine has a feature on Victoria composers — including current concert manager Kristy Farkas — which comes with an accompanying CD. 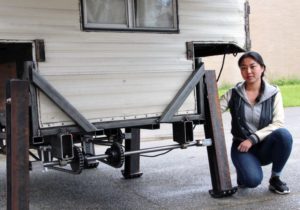 In Theatre, alumnus Chris Wilson has joined the cast of CBC TV’s legendary Air Farce comedy troupe, Meg Braem was recently announced as the newest Lee Playwright in Residence at the University of Alberta Department of Drama, Amiel Gladstone continues to reap accolades with the award-winning musical Onegin, which he co-created and directed, and continues to tour across Canada (including a recent Belfry Theatre production starring Meg Roe), and former CBC TV Being Erica star Erin Karpluk continues to pop up on such TV shows as Masters of Sex, Criminal Minds and the continuing A Fixer Upper Mystery. 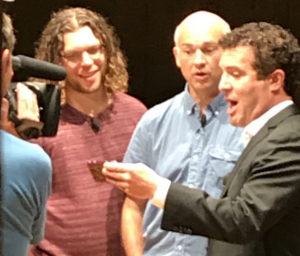 And there’s nothing like a bit of celebrity to wrap up part one of this post: the School of Music (and UVic as a whole) was thrilled when legendary CBC TV host Rick Mercer came to campus in October to film a segment for the final season of The Rick Mercer Report — including a live, on-camera singing lesson with voice professor Benjamin Butterfield and student Taylor Fawcett. A highlight was hearing Mercer sing the day’s Globe & Mail headlines!  “I always thought I couldn’t sing but [Butterfield] convinced me that I, maybe, potentially, might be able to in the future. So I’ll be back doing my degree in opera,” quipped Mercer in this Martlet interview with Writing student Cormac O’Brien.