History in Art professor Dr. Marcus Milwright has been named the winner of the 2013 Craigdarroch Silver Medal for Excellence in Research. One of only five annual Craigdarroch awards, the Silver Medal is given to UVic faculty members who have demonstrated excellence in their field and “excel in original, productive, entrepreneurial and ground-breaking research.” 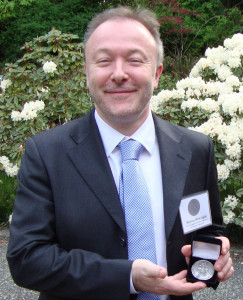 That description certainly applies to Milwright, who, in addition to being a professor in Medieval Islamic art and archaeology, is also the director of the Medieval Studies program. “It’s an honour to receive an award like this, and very much unexpected,” says Milwright. “There are many people nominated from many departments across the university, so it’s very good it’s come over to Fine Arts.” (Only two other Fine Arts representatives have won Craigdarrochs: Lorna Crozier in 2012 and the Lafayette String Quartet in 2010.)

“As one of the most active and productive Islamic art historians working in the world today, Marcus Milwright is an expert in explaining the history of medicine and cross-cultural exchange in the medieval Mediterranean world though art, architecture and objects—connecting the dots between these artifacts and social history,” notes Dr. Howard Brunt, Vice President Research. “And he’s also great at sharing what he knows: amid two distinguished Aga Khan Fellowships and more than 15 years of field work, Milwright published An Introduction to Islamic Archaeology in 2010—an award-winning textbook considered by his peers to be the world’s best introduction to this field of work to date.”

“Marcus is a specialist in the archaeology of Islam—one of his scholarly peers calls him ‘a shining light’ in the discipline,” says History in Art department chair Catherine Harding. “Since being appointed at the university in 2002, he has made substantial scholarly contributions to the fields of Islamic archaeology—especially in the field of ceramics—and the history of Islamic art and architecture in a number of important books and articles. The field of archaeology is tremendously important right now, as political events impact on the historical and material artifacts of Middle Eastern civilization.” 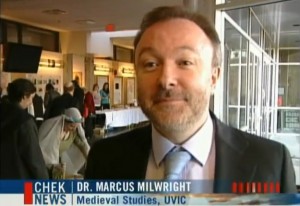 Milwright, who seems perpetually busy with teaching, students, research and various book projects, appears to take his diverse accomplishments in stride. “I have a low boredom threshold, so I like to have lots of different projects operating simultaneously,” he chuckles. “But the Medieval Studies work has been very important to me. We do have a very important role in terms of the Medieval Workshop every year, where people can talk about their research in the community, and create a stimulating environment where discussion of medieval culture and research is possible.” 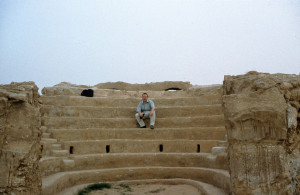 Miwright in Syria, at the ancient site of Dura Europos on the banks of the Euphrates River

A member of the History in Art department since 2002, Milwright feels his field of expertise helps keep him connected with a constantly evolving field of knowledge. “Archaeology is intrinsically a cross-disciplinary process,” he explains. “One day you’ll be looking at ceramics, the next you’ll be looking at the archaeology of a site and collaborating with scholars around the world.” (He’s seen here in this earlier photo of at the ancient site of Dura Europos, which he describes as “a fantastic site containing all sorts of treasures including one of the earliest known Christian places of worship and a lavishly decorated synagogue, both of the 3rd century CE.”)

“One of the important things about doing art history and archaeology is conserving the cultural heritage,” says Milwright, who just returned from a brief stint as a visiting professor at Saudi Arabia’s King Saud University. “Syria, where I do a lot of work, is one of the richest countries of the world in terms of it having such great sites from every single period of human history—but so much of that gets lost in times of threats and unrest. There’s tangible things, like the loss of archaeological sites and widespread looting, but there are also changes to the cultural environment.” 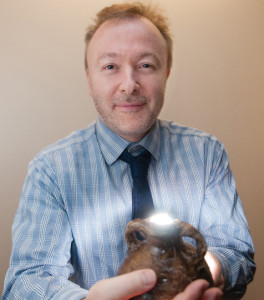 Despite the current political situation, Milwright is still busy doing what he can from a distance. “We do have an important responsibility to try and record as much of the history—and I’m talking about history on the human level, not the big political history, the sort of little micro-relationships within the centers that we try to record through archaeology and the texts.”

Harding notes Milwright’s latest research project “includes a study of balsam in the medieval period, linking his research to the history of medicine and material culture in the Middle East.” In addition to the medal itself, the Craigdarroch Award also comes with a $1,500 research grant. “If I can, what I’d like to do is use it to involve students to work on various projects I’m doing. I think it’s really important to get students involved in these research projects.”

A complete list of all 2013 Craigdarroch winners can be found here.