“Brilliant” reviews for Lion in the Streets

It’s another strong batch of reviews for Phoenix Theatre’s latest production, Lion in the Streets. “Brilliant,” “brave and intrepid” and “tremendously successful” are just a few of the accolades that have been rolling in from local theatre reviewers. 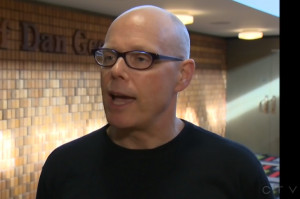 Lion in the Streets director Conrad Alexandrowicz on CTV VI

Lion in the Streets is directed by Department of Theatre professor Conrad Alexandrowicz, who uses his extensive background in physical theatre to fuel his compelling direction of Canadian playwright Judith Thompson’s award-winning play. This is third production in Phoenix‘s 2014/15 season and continues until February 21.

CBC Radio’s On The Island theatre reviewer David Lennam was utterly effusive in his praise for the production, the cast and the direction, noting he could describe it in “one word: brilliant. It’s simply one of the best productions of the year.” Lennam praised the “really professional ensemble acting” and director Alexandrowicz‘s “lively, emotionaly gripping direction.” You can listen to the full review here.

Times Colonist theatre critic Adrian Chamberlain gave the show four out of five stars in this review, noting “the production, skilfully directed . . . offers a variant on magic realism. Scenes begin in a naturalistic manner, then shift to a nightmarish realm as Thompson plunges into unconscious worlds. This is where the playwright is at her best—her subterranean visions are unrelentingly honest, brave and highly imaginative . . .”

Chamberlain also praised Alexandrowicz’s direction. “The directorial approach, here and elsewhere, is tremendously successful . . . . Alexandrowicz has a thorough understanding of the play—the extra physicality adds much.” Summing up, Chamberlain felt “this is one of the most consistently strong student casts in recent memory . . . . this show will be enjoyed by open-minded, intelligent audiences. It’s not easily forgettable . . . . the excellence of the production makes it all worthwhile.” 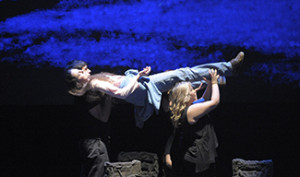 And local theatre blogger Janis LaCouvee also felt the entire production was top drawer in this review, noting “cast and crew have succeeded beyond measure. Lion in the Streets is dark, disturbing, revelatory and illuminating—it demands an audience equally as brave and intrepid.”

LaCouvee also praised the design elements of the show, singling out Colette Habel’s “brooding sound design [which] immediately sets a mood of disquiet and unease, a portent of the tales to come” and Allan Stichbury’s set “[which] oozes muck and mire with sculpted floors and chairs.” She also noted Bryan Kenney‘s lighting (“dark, with narrow slivers of illumination, focusing attention”) and projections (“reminiscent of a child’s drawings, pulling the audience into a world seen through Isabelle’s eyes”), as well as costume designs by Emma Welsh which “bring in elements of the period to punctuate the often-monochromatic colour scheme.” 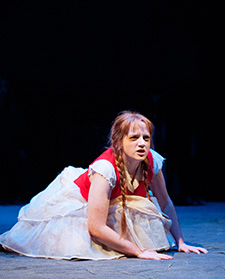 Lindsay Curl as 9-year-old Isobel in Lion in the Streets (photo: David Lowes)

Lion in the Streets follows Isobel, a lost Portuguese girl wandering around her neighbourhood, frightened and looking for answers. She witnesses a series of dark moments in the intertwined and troubled lives of several strangers in her community as they try to hold on to their own humanity; by watching them, she finds understanding, forgiveness, and ultimately redemption. And although the scenes in Lion in the Streets are set in a Toronto neighbourhood, the play itself brings the audience to a place somewhere between reality and dreams, memories and fantasies.

The production also received strong previews in this Times Colonist article, in which director Alexandrowicz noted his cast immediately embraced playwright Thompson’s dark vision. “Listen, these kids, are you kidding me? Young people these days are, well, they’ve seen it all. They grow up very quickly in a digital age.” Adam Sawatsky of CTV Vancouver Island also offered a preview in this TV interview with Alexandrowicz (skip ahead to the 5:28 mark) and both director Alexandrowicz and set designer Stichbury were interviewed in this Oak Bay News piece. And Gordie Tupper of CHEK TV profiled the Lion in the Streets cast and interviewed Conrad Alexandrowicz in this clip.

Finally, click hear to listen to a recording of director Alexandrowicz’s pre-show lecture about the history of Judith Thompson’s award-winning play and his process of collaborating with the actors to develop this production.

Lion in the Streets continues until February 21 at UVic’s Phoenix Theatre. The show runs 8pm Mondays to Saturdays, with a 2pm matinee on Saturday, February 21. Tickets $14-$24.