While the martlet is the mythical bird most associated with UVic, there is another legendary winged creature deeply tied to the university’s history: the phoenix. And this month sees Phoenix Theatre marking 50 years of great theatre, and great theatre education. 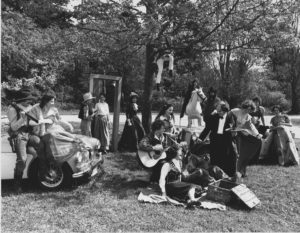 From that volunteer-built 80-seat theatre in 1963, the fledgling program bloomed into what is arguably Canada’s leading comprehensive theatre program. Housed since 1982 in a sophisticated purpose-built theatrical complex that remains the envy of most post-secondary institutions, the Phoenix — a fitting moniker for a building that rose from the remnants of an old military hospital, morgue and chapel — has long been recognized for not only its rigorous academic environment but also for its combination of training and entrepreneurship.

“Our students roll up their sleeves and work together to create amazing productions throughout the year,” notes Lindgren. “That ingenuity and work ethic gives them an advantage when they start their careers.” 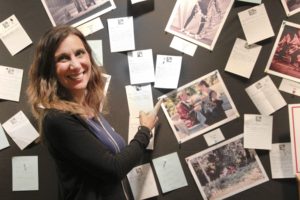 Not everyone has to leave campus to find success, however: consider instructor and Audiences Services Manager Sandra Guerreiro, whose life has been intimately shaped by the Phoenix. Not only has she worked there for 30 years, but her husband, Charles Procure, is also head of scenic construction and one of her sons, Nicholas Guerreiro, is a current student—and she’s an alumna. “The first show I did at Phoenix was actually the last show in the old huts—The Madwoman of Chaillot, back in 1981,” she says.

While that particular production was a high school summer intensive, Guerreiro then enrolled in the theatre department in 1982, graduated in 1985, and was hired on a box-office contract in 1986, which soon led to a full-time position. This affords her a rather unique perspective, given her connection with every graduating class over the past 30 years. When asked what the theatre department’s biggest impact is, she doesn’t hesitate. “It’s the community, the people,” she says. “After 50 years, there’s a huge network of Phoenix people across the country and it still feels really strong.”

All of which makes Guerreiro the ideal point-person for the Phoenix’s upcoming 50th anniversary celebrations. Now that October’s Alumni Festival performance series has wrapped up, Guerreiro is gearing up for the upcoming Alumni Reunion weekend. Running November 11 -13, more than 160 alumni will be returning to the Phoenix to help mark the occasion. 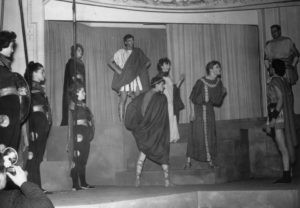 Wow, those spear-carriers are really carry spears! 1964 production of “A Midsummer Night’s Dream”

“Our Alumni Facebook page started with four people and, as of today, it’s up to 513,” she says. “People are really excited, there’s a lot of talk on there. We’ve got folks coming from England, California, Oregon, Toronto, Ottawa, Calgary, lots from Vancouver . . . and from all the different eras.”

As well as catching performances of their latest mainstage production, Les Liaisons Dangereuses, the Alumni Reunion weekend will also feature a Mix ‘n’ Mingle in the McIntyre Studio, a Decade-by-Decade lunch, Saturday night dinner and dance, a family fun run, farewell brunch, and archival displays both in the theatre lobby and at McPherson Library. (Visit their 50th anniversary site for full details and a nifty interactive 50-year timeline highlighting key points in the department’s history and many of their notable alumni.)

Despite the months of planning and inevitable scheduling hiccups, Guerreiro is still looking forward to reconnecting with her “Phoenix phamily” at the reunion. “It’s been really fun,” she says. “So many people have been messaging me, posting pictures . . . it really is exciting.”