The Department of Visual Arts is proud to announce the appointment of Jackson 2Bears as the 2013/14 Audain Professor of Contemporary Arts of the Pacific Northwest. Following in the footsteps of noted Indigenous artists and previous Audain professors Rebecca Belmore, Michael Nicol Yahgulanaas and Nicholas Galanin, 2Bears is the first UVic alumnus—and the first local artist—to be appointed to the position. 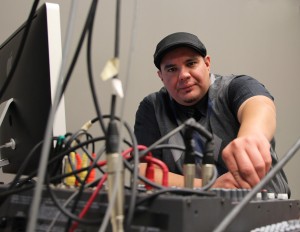 A Kanien’kehaka (Mohawk) multimedia artist, 2bears is a frequent face around campus. Having completed both his Masters and PhD here, he has taught for both Visual Arts and UVic’s Pacific Centre for Technology and Culture. His work has been exhibited in solo and group exhibitions nationally and internationally, and he is currently one of nine contemporary artists participating in the group exhibit, Ghost Dance: Activism. Resistance. Art., running to December 15 at Toronto’s Ryerson Image Centre.

While his classes have already begun—he’ll be teaching both the third-year Audain seminar and a second-year digital media arts course—2Bears’ first Audain duty will be presenting in the popular Visiting Artist series (8pm Wednesday, September 25, in Visual Arts room A162), which are always free and open to the public.

“I’ve been at UVic for a long time, so part of my role is to bring some of those other areas and people together with Fine Arts,” he says. “My personal project is to start plugging this Audain position a bit more into the rest of the university, both for myself and whoever comes next.” 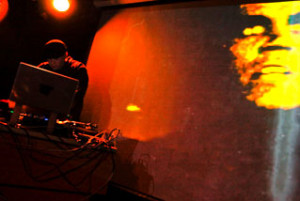 2Bears putting his art into action

Making connections is a large part of what drives 2Bears as an artist. He describes his current practice as focusing on “the aesthetics of Indigenous identity in contemporary times . . . I envision my practice as a form of cultural critique in which I explore alternative ways to engage with the question of Native spirituality in our modern, technological society.”

2Bears works with new media, interactive installations and multimedia performances to reflect on issues of racism, colonialism, discrimination, Indigenous subjectivity and Native stereotypes. “My conceptual interests lay in identifying points of convergence between contemporary technocultural studies, and Indigenous teachings,” he explains, “the aim of which is to reconceive of a means by which we can understand contemporary Indigenous subjectivity in the context of our technological culture by identifying alternative means of engagement and resistance.”

2Bears sees no clash between traditional First Nations and the more contemporary practice for which the Audain position was created to highlight. Paraphrasing noted American Indian author Vine Desloria Jr., he says, “It’s a strange misconception of the traditionalists that indigenous culture happened a long time ago, that we’re always having to go back to the past. But a crucial part of our tradition is change, transformation, evolution.” 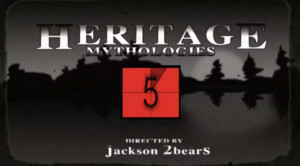 Not that he’ll be pushing his students to create First Nations-influenced art, regardless of their cultural background. “That would be a very restrictive model—even if they were all Indigenous students, but didn’t want to work with Indigenous content,” he says. “I do some lectures on contemporary First Nations art, just because it doesn’t really happen anywhere else at the university that I’m aware of, but that’s just coming from my perspective, sharing with the class where I come from. I do want them to explore their own cultural background—but if they are interested in First Nations art, I want them to approach it on their terms, not mine.”

“One thing I learned from Taiaiake Alfred in UVic’s Indigenous Governance program was about encouraging non-Indigenous students to approach things from their own perspectives,” he continues. “We all participate in this landscape called Canada, so it’s not about imagining themselves as an Indigenous person, but approaching things from their own cultural backgrounds. People come from all different backgrounds. I always tell my students not to make stuff I would like, but to find out for themselves what excites them—especially in those crucial third and fourth years, where they’re encouraged to think for themselves and find their own practice. I’m just here to facilitate, moreso than telling them what to do. It’s really important that the teacher-student relationship isn’t one of master/disciple . . . I see it as more participatory; we’re all in a group working together. It’s all about reshaping that teacher/student relationship.

When asked what aspect of that message he’ll bring to the Audain professorship—created in 2009 as part of a $2-million gift from celebrated BC art philanthropist and National Gallery of Canada board chair Michael Audain and the Audain Foundation—2Bears doesn’t hesitate. “Each Audain professor brings their own artistic practice and their own background as a teacher and as an artist in residence as well, so each brings their own talents and creative energy to the school and the space,” he says. “Each year, the course is meant to be quite organic and geared toward whoever is teaching it and their specialty—for me, that means an interest in contemporary First Nations art and an interest in larger social and political issues.” 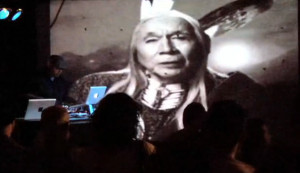 2Bears performing one of his scratch videos

It will also mean exposing his students to his performance art. Primarily inspired by electronic music and DJ/VJ culture, 2Bears uses remix as a tool for cultural critique—which he’ll be experimenting with in his studio as artist-in-residence. “A lot of what I’ve been doing over the past few years is live cinema—scratch video, I call it,” he explains. “Picture a DJ with turntables, but back in 2005 I started programming a version where instead of just scratching music you could play video on the turntables: spinning it backwards and forward, use the mixer for not just volume but brightness and cross-fading. What I want to do now is build some more audio-visual instruments—some sort of video synthesizer, where I take an analogue keyboard and make it not only produce sound but video as well. I’m also working on some pow-wow drums that will project video images when you play them.”

Clearly, 2Bears has tapped into something with his often playful take on popular Native stereotypes, which he says “function as mixed-media interventions against extirpative and discriminatory representations of First Nations culture.” His multimedia works have been exhibited at the Art Gallery of Greater Victoria, Toronto’s ImagineNative Film + Media Arts Festival, Vancouver’s Video In Video Out, Edmonton’s Visual Eyez Festival and the Digital Art Weeks in Zurich, Switzerland—and he has released several recordings and live performances on CD and DVD, in both solo and collaborative contexts. “I tell my students that even when I was doing my undergrad in the 1990s, there was no such thing as ‘video art’,” he chuckles. “New digital technology makes it all so much more accessible to everybody.”

From his Clip Art Self Portrait series

Beyond a greater appreciation for contemporary Indigenous art, 2Bears also sees the artist-in-residence aspect as another strong benefit of the Audain position. “It’s good for the students to see their professors struggling with the same decision-making processes, how to actually produce and make work. It’s too easy for students to see professors as really successful artists where they work hidden away in their studios—but it’s really fantastic to be involved in a more community-like aspect. Again, it changes that whole professor-student relationship.”

Given his participation in the current Ghost Dance exhibit, as well as such recent popular exhibitions as Beat Nation: Art, Hip-Hop and Aboriginal Culture and the AGGV’s upcoming Urban Thunderbirds/Ravens in a Material World exhibit, it seems like a good time to be a contemporary Indigenous artist.

“It’s not that there are more artists now—indigenous people have been making art forever—but I do owe a debt to all the battles that were waged in the generations before me, back into the 1950s and ’60s, when native artists were fighting to have their voices heard and work seen in contemporary spaces,” he says. “During that period, Native art was considered more artifact, more cultural phenomenon—not contemporary work. That shifted dramatically in the ‘70s, so it’s thank to those folks who waged those battles and won them; now, there’s an appetite for it. These multimedia collages are, for me, a means of discovering a self-reflexive path of engagement with my own Native heritage by way of remixing and reappropriating Indigenous identity for myself.” 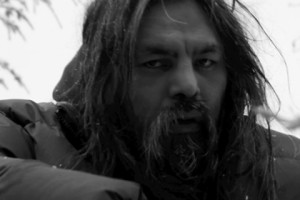 From Nicholas Galanin’s Ever Shoot An Indian?

On a related note, 2013 Audain Professor Nicholas Galanin is screening Ever Shoot An Indian?, four short films exploring issues around contemporary Indigenous identity. Running on an 18-minute loop, they can be seen 10am to 5pm weekdays to October 4 in the Visual Arts Building’s Audain Gallery. As with all Visual Arts exhibits, this is free and open to the public.