When it comes to academic achievement, good things often come in quiet packages. Consider the case of graduating School of Music student Spencer Davis, who has been named the recipient of the 2015 Victoria Medal—awarded annually to the student with the highest GPA in the Faculty of Fine Arts—thanks to his impressive graduating average of 8.94. Yet as one of his instructors notes after four years of working together, “I had no idea what kind of a player he would be because he is so unassuming.”

“This is a great honour, and one for which he obviously had to work tremendously hard,” notes Acting Dean Lynne Van Luven. “I congratulate Spencer on this wonderful cap to his Bachelor of Music career.” Davis graduates on June 11, along with the rest of the Fine Arts class of 2015. 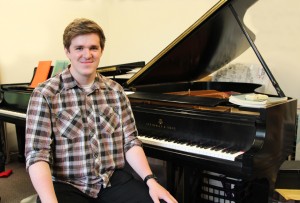 Vancouver-born but Calgary raised, Davis returned to the coast to attend UVic. “I auditioned for, and was accepted at, a few other schools but I chose to attend UVic because of the distinct friendliness I experienced from the students and faculty during my audition. I’ve had a great experience at UVic, and I’m glad that I chose to come here.”

When it comes to achieving such a remarkable GPA, Davis puts it down to the fact that he worked “tremendously hard.” “I prioritized school above everything else in my life, and I focused all of my energy on it.” Not that he feels this puts him above his peers. “I have friends who did the same, and I feel strongly that they are just as deserving of this award as I am.”

“Spencer [is] as a musician and performer of the highest caliber,” notes School of Music director Susan Lewis. “He gave major solo performances and collaborative recitals, culminating in a graduating recital featuring music by Debussy, Beethoven, and Chopin.”

You can listen to his graduation recital here, which features Davis performing Debussy’s “Suite Bergamasque,” Beethoven’s “Bagatelles, Op 126,” Chopin’s “Mazurkas, Op 24 Nos 3 & 4” and “Sonata No 3 in B Minor,” as well as some of his other performances.

But the soft-spoken Davis downplays his academic accomplishments (“To be honest, receiving this award feels like my greatest achievement here,” he says), calling his solo graduation recital “an incredibly daunting challenge—and one of the most character-building experiences of my life.” 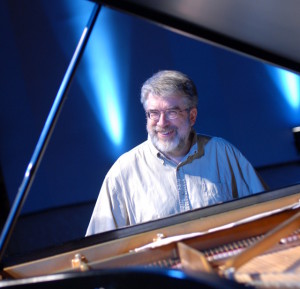 Describing him as “a quiet-spoken young man who would always come to his lessons with very particular ideas about interpretation,” supervising professor Bruce Vogt calls Davis “a special talent . . . I never had to push him or remind him that things were behind. He basically was taking almost the equivalent of two degrees, and yet he kept the highest standards in everything. He is indeed a special student—thoughtful, compassionate and extremely intelligent.”

Beyond performance, the other of those “two degrees” came about as a result of Davis taking professor Andrew Schloss’ “Music, Science & Computers” course. “It introduced me to new ways of thinking about music and sound, and stoked my interest in music technology,” Davis recalls. “It also got me interested in studying math and science, at which I had excelled in high school, but for which I had never felt any passion.”

Following Schloss’ class, Davis swiftly registered in two introductory computer science courses. “At this point, I knew I wanted to pursue my new interest academically, but also felt driven to finish my music degree, so I supplemented my music courses with courses from the software engineering program, applied for it, and was accepted,” he says. “I’ve long had an interest in electronic music, and am well-acquainted with modern digital audio tools. It’s my hope that I’ll be able to draw on my background as a musician and performer to create new kinds of tools for digital audio that are less restrictive and more intuitive.”

With his departure from the School of Music, Davis singles out piano professor Bruce Vogt. “I should take this opportunity to thank Bruce Vogt, with whom I have worked closely for the past four years, and for whom I have a great deal of respect. I’ve learned a lot from him, and he has had a really positive influence on me personally and artistically.”

As for the future, Davis says he hopes to find an occupation that “capitalizes as fully as possible on my unique set of aptitudes, and on what will be, at the close of my time at UVic, my unusual and diverse educational background.”