Pending Approval runs daily April 29 to May 6, with a 7pm opening on Saturday April 29, in UVic’s Visual Arts building. 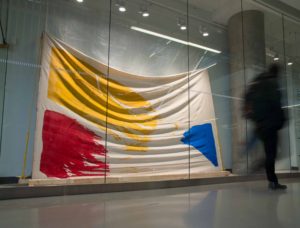 Evan Locke’s painting exhibit Ley Lines explores the idea of paintings as tools promoting a conscious awareness of architectural space, and the viewer’s presence within it.

“The immediacy of a direct correlation between a mark and its origin allows painting to shift from abstraction to actuality and become a practical artifact of an event taken place,” Locke explains. “The expression of the artist’s hand is replaced by depictions of causality — obviating process and engendering a confrontation with reality.”

With the application of paint wholly facilitated by the structure itself, each piece reveals the nature of its own existence. “The paintings are simultaneously recording medium and implement,” he says. “Time and space become visually attributed and confrontational to the psychological aesthetic experience.” 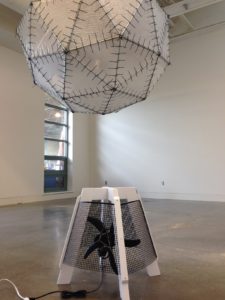 Heather Koning’s exhibit Inertia is a mechanized sculptural installation where she has created kinetic objects speaking to perceptions of structural powers — physical or social — and their assumed function. All the works are made from found materials and old appliances.

“My art practice is a way to find order in today’s constant flow of information, to make sense of the world and its challenges, the changes and the constants,” says Koning. “The walls of my studio echo with noise. The politics of the world, conflicts and social imbalances breach my space through electronic screens and radio waves. “

Inertia surrounds the viewer with a roar of sound and activity. Each object has a task, a motion to perform. Some require the viewer’s presence to move, while others self-regulate or work continuously, perpetually trying to negotiate and reorder the gallery space.

“The objects stand in as physical metaphors for existing forms of power, spaces and rules that inform how humans navigate and experience the world,” she explains. “I created these objects to draw attention to perceived boundaries, anticipated actions and humorous motions of futility as metaphors for bureaucracy and public space.” 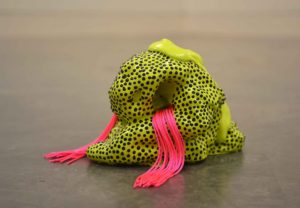 One of Maddy Knott’s sculptural pieces

Maddy Knott’s sculptural exhibit Dressing Up Daydreams considers the interaction of structures with organic forms and the idea of a codependency or an alteration existing between these forms.

“My work considers structures, such as the mind and patterns,” she explains. “I question these structures and our relationship to them, and how as an organic form encroaches on a structure, both elements are forced to change. These themes reflect my interest in the corruption of memory and how memories become altered over time.”

Using unexpected materials in her pieces allows Knott the chance to interpret their properties and consider how far she can exploit said material; every new material offers new challenges, as well as components of chance and unpredictability.

“Something magical happens when you blur lines in the art world,” she says. “it’s nice to make your own rules. I want the materials to allow the viewer to embrace how odd the works are and present them with a position of curiosity.” 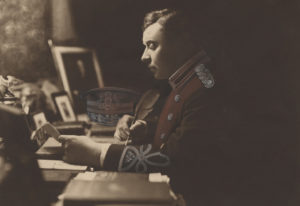 From Carrie Walker’s “The Circle Hunt”

Carrie Walker’s exhibition, The Circle Hunt, is the culmination of her decade-long fascination with a historical event called The Great Pennsylvania Circle Hunt (or The Great Slaughter). Feeling harassed by wolves and mountain lions, the settlers and colonists in the area decided to organize a great animal drive, with 200 armed men and boys forming a circle 30 miles in diameter — and killing every animal within its boundaries.

“To the best of my knowledge, there exists only two written records of this event — one published in 1990 and another in 1917,” she explains. “Since first reading about the circle hunt, I have struggled to find a way to make manifest the numbers of animals killed.”

Walker says she at first considered producing a large volume drawing project with a single drawing for each animal killed — over 1,200 drawings would be required — but the written information surrounding each image provided a context she couldn’t ignore: a childʼs first hunt, offers of bobcats for sale, advice on drowning skunks.“[It’s] rife with the contradictions and complications that riddle the relationship between human and non-human animals.”

Rather than a drawing project, Walker instead compiled a book containing a photograph for each animal killed during the Great Slaughter, along with the URL of the webpage on which it was found and select excerpts of text from the webpage. Included in her exhibit is a single drawing is: a life-size representation of the Anson Panther — one of the last panthers to have been killed in Pennsylvania before the species was extirpated in the mid-1800s. 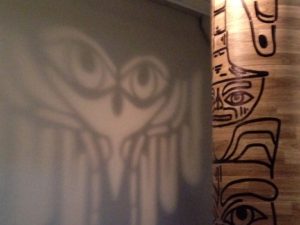 Finally, Tlehpik Hjalmer Wenstob‘s exhibit Transfigurations seeks a balance between methodology and mythology by imbuing an Indigenous sensibility into such ubiquitous West Coast objects as a telephone pole, a Styrofoam cooler, and a stack of two-by-fours.

“I’m looking to shed light on both cultural understandings and Canadian politics as it relates to Indigenous people of the Pacific Northwest,” says the Nuu-Chah-Nulth artist from the Tla-­O-­Qui-­Aht First Nations.

In relation to the large demographic in Canada, Wenstob looks to redefine titles such as “First Nations” art — an overly broad term that he resents — within the contemporary art world. “I see my work as a way to begin conversations and break down preconceived notions and stereotypes of ‘First Nations’ culture and art.”

Using such commonplace objects as oil barrels and second-grade lumber, Wenstob recreates totem poles to create a broader conversation around overlooked objects now seen as a figurehead of “Canada” while also continuing on his traditional and political role as a Nuu-­Chah-­Nulth carver.

By creating work accessible to both Indigenous and non-­Indigenous people, he sees his work as a way to begin conversations and break down preconceived notions and stereotypes of “First Nations” culture and art — while also telling the truth about history. “It’s important to create a dialogue around our ever-changing environment, as it relates to resource extraction, inaccessibility to territory and an urban relationship to the land, dislocated from home.”

Pending Approval runs daily April 29 to May 6, with a 7pm opening on Saturday April 29, in UVic’s Visual Arts building.