When it comes to community engagement, it’s hard to beat an art show where more than 70 local artists contribute work for an exhibition proposed, organized, curated and displayed by a team of Art History & Visual Studies faculty and alumni.

Women Hold up Half the Sky, an exhibition in celebration of International Women’s Day (March 8), runs at the Community Arts Council of Greater Victoria’s exhibit space in downtown’s Bay Centre until March 13. 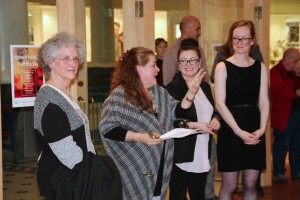 Art History & Visual Studies professor Astri Wright is guest curator of this exhibit by local women. Vancouver Island and Gulf Islands artists were invited to submit work representing how they see their ideas having agency in the world—whether through their art or other avenues—with over 300 submissions curated to the final 120 pieces on display. Describing it as a “lightly juried” exhibit, Wright also brought in retired AHVS professor Elizabeth “Betsy” Tumasonis as guest curator.

“It was a pleasure to curate work by these women,” says Wright. “Very few can live off their art; whether trained or untrained, most of these artists are working on an amateur basis—and I don’t use ‘amateur’ as a put-down, it just means they’re doing it for the love of it . . . that sense of inclusiveness and celebration of women was paramount for this show.”

Wright, who formulated and pitched the exhibit idea to the CACGV—where she had also curated an International Women’s Day exhibit in 2008—was excited to discover three AHVS alumni were already involved with the gallery: Executive Director Stephanie Eisenbraun (BA ’11), Gallery Coordinator Brin O’Hare (MA ’14), and ‎Assistant Arts Coordinator Alanah Garcin (BA/MA ’12). All three are good examples of how the hands-on learning that happens in the Art History & Visual Studies department can prepare students for careers in the arts. 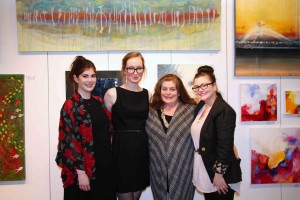 “Working with them has been a lot of fun, professionally and personally,” says Wright. “The training we get in art history positions us to see value in a much broader range of art and media than what you see in a more tightly or subjectively curated exhibition. This is a clear case of where the professional concerns of an art historian and those of a community organization dovetail very nicely. An exhibit like this represents greater diversity and more aspects of our community—both the art community and the larger community—than is often seen in professional gallery spaces.”

She also praises the increased perspective art history can offer when it comes to seeing the world through new eyes. “Most people have a subjective response to art, but what art history adds to our toolbox and our perceptual abilities is the ability to know how to locate that response,” she says, “as well as an appreciation for a broad wealth of media, stylistic approaches and different kinds of aesthetics. Art history really trains for inclusiveness—especially in our department, where so many parts of the world are represented.”

You can find out more about the show in this CBC Radio All Points West interview with one of the exhibit’s participants, who specializes in creating large-scale community art projects, or in Wright’s interview with ExhibitVic, which also includes a tour of the exhibit. There will also be a special Speaker’s Series, hosted by Wright, from 2-4pm on Sunday, March 6. 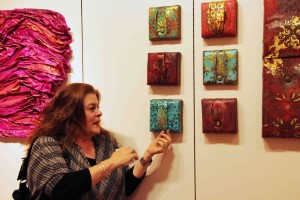 Wright discusses one of the exhibit pieces

Wright, whose research focuses on Asian, South Asian and Indonesian art and artists, has a long history of studying activist artists and women artists of Indonesia’s Suharto era. Since the turn of the 21st century, she has also been interested in global collaborations between indigenous-contemporary and modern-contemporary artists. Her curatorial work—including the recent on-campus exhibits Seeker, Sentry, Sage: Shades of Islam in Contemporary Art and Roots, Remakes and Reflections: Global/Canadian Kaleidoscopes—focuses on contemporary artists who draw on hybrid and global identities in their work.

“I’ve always been drawn to research and curating that follows an idea of greater inclusiveness, that deconstructs colonial and elitist frameworks,” she explains. “My publications have all been about contemporary artists working in very pluralistic art worlds, working outside of the canonized masterworks ‘celebrated genius’ histories—which is nearly completely focused on male artists.”

Wright very much sees exhibits like Women Hold up Half the Sky—where the work ranges from paintings, sculpture and installations to photographs of events like the Idle No More movement—as a way of challenging that sense of privilege. “There are ways of wielding knowledge as a mix of objective tools and subjective inspiration—which is also part of decolonizing the way women have been colonized in art history, in the art world and in the world in general by predominant values.” 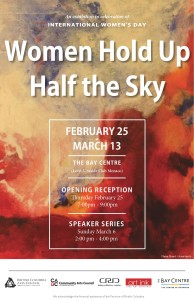 Similarly, she sees the CACGV’s gallery in the Bay Centre as ideal for this kind of show. “It is a gallery in a mall, which means it’s not a freestanding gallery in a very elite part of Victoria,” she chuckles. “Instead, it democratizes the gallery experience, and removes that barrier.” Pointing out the diversity of the exhibit’s attendees (“a real mix of service workers, parents with strollers, seniors and shoppers”), Wright praises the CACGV for their inclusive approach. “Most artists are not going to find representation in a commercial gallery, so when artists can find a place like this to show their work, it can be incredibly important for viewers and artists alike. It adds to the culture around art.”

Ultimately, says Wright, it’s simply better to have more art by a greater diversity of artists on view in the community. “The richer the offering of visual art to the public, the better,” she says. “Music reaches almost everybody—whether it’s R&B or rock or classical or opera—but visual arts doesn’t reach people as powerfully here in North America as it does elsewhere. Here, it’s more of an urban, educated, professional pursuit, unless you’re an artist or from a family where there’s an artist.”

As her research has proven, this isn’t the case elsewhere in the world. “I don’t know if 90 percent of the people in Victoria could name a great exhibition they saw recently or an artist they really like—beyond the level of the clichés, like Van Gogh or Picasso. But in Indonesia or Japan or India, there’s a much larger appreciation for the visual across the board, and people have better cultural training in finding the importance in visual symbols.”

“Perhaps it’s our exposure to mass media, or the way art history developed as an elite discipline,” she muses. “To a certain degree, the split between the work of the mind and the work of the hand is still with us. Trying to bridge those gaps, mend those splits and speak across the distance is gratifying work.”