It’s an eternal story: boy meets girl, they fall in love—but, since the year is 1914, the boy must go off to war and their love must face an uncertain future.

The School of Music is pleased to welcome Pacific Opera Victoria for a special free production of Mary’s Wedding, a notable new Canadian opera about the impact of the First World War on the homefront. Described as “a love letter to the power of memory and innocence, and to a generation of Canadians who were caught in the crucible of the First World War,” Mary’s Wedding is an apt way to mark Remembrance Day on campus. 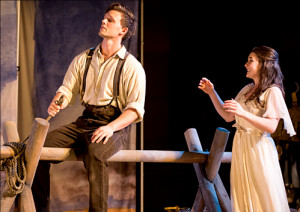 Kaden Forsberg & Caitlin Wood in a scene from Mary’s Wedding

Originally written for the stage by Stephen Massicotte and later developed into a full-scale English-language opera featuring music by Andrew P. MacDonald and Massicotte’s own libretto, POV has now created a re-imagined one-hour version of Mary’s Wedding that they will be presenting at 7:30pm Friday, November, 13, in the Phillip T Young Auditorium.

Set in Western Canada in the aftermath of World War I, Mary’s Wedding was originally commissioned by Pacific Opera Victoria and had its world premiere in November 2011. This production—directed by Art History & Visual Studies alumna Glynis Leyshon—features a strong School of Music presence, with first-year Masters candidate Kaden Forsberg in the lead role as Charlie, as well as third-year undergrad soprano Margaret Lingas in the chorus; joining her in the chorus is also Music tenor alumnus Cedric Spry. “The chorus is only a quartet, so it’s nice that two of our students are there,” notes proud Opera and Voice professor Benjamin Butterfield.

Mary’s Wedding explores the fleeting nature of time and the lasting power of love, evoking prairie thunderstorms and ladies’ teas, and, as innocence rides off to war, the horror of the battles of Ypres and Moreuil Wood, in which Canada came of age as a nation. Much of the production’s power comes from its sense of the fluidity of time, the shifting of past and present, here and there, reality and dream. The emotional impact is stunning: everything becomes present for us here and now . . . we are the children of Mary’s Wedding.

Seating is limited, so do arrive early.