People who have mostly known only poverty and suffering have now found new hope, a sense of joy and a stronger community thanks to a recent University of Victoria Applied Theatre field school in India. 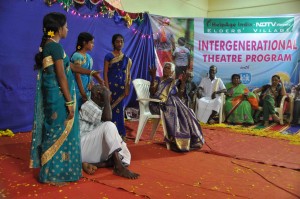 In a scene written by Vadevil, Jayamma and he speak with the Isha students
while trying to find food and water (photo: Laura Buchan)

Led by PhD candidate Matthew Gusul, 13 Department of Theatre undergraduate students traveled to India’s Tamil Nadu and Pondicherry regions to participate in the field school throughout October and November 2014. Gusul, an Applied Theatre practitioner who has done similar fieldwork in Mexico and Guatemala, has been working with the 80 people in Tamil Nadu’s Tamaraikulam Elders’ Village (TEV) for the past two years. By positively highlighting the life experiences of TEV residents and the 750 young students of the Isha Vidhya Matriculation School—both of which were created after the 2006 tsunami to address issues of displacement and vulnerability—Gusul, his students and a team of Indian directors encouraged these seniors and rural youth to perform their own stories, develop strong community relations and create new lines of dialogue across generations.

We first wrote about Gusul’s Intergenerational Theatre for Development plans back in October 2014 while he was planning the field school. “I really want to look at how the community is affected by this process—the performance and process leading up to it should be absolutely wonderful, filled with fun and joy and laughter,” Gusul said at the time. And it sounds like that’s exactly how it came together.

Culture from the inside out 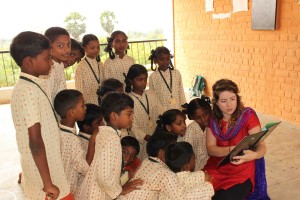 “Everyone had a wonderfully dynamic and very emotional experience,” says Gusul. Upon arriving, the undergraduates started familiarizing themselves with India and teaching English and basic theatrical exercises at the Isha school, while Gusul himself instructed the UVic students on neo-colonialism and its legacy in India. “The school is filled with first-generation learners—which, in India, means they are the first member of their family to ever attend any school—and of the 15 students who became part of the theatre company, only two of them had parents who could read or write,” he says. “One of our students used the phrase, ‘Getting to know culture from the inside out,’ which is precisely what we did.”

With participants ranging in age from nine to 90, Gusul and his students worked to develop a sense of intergenerational playfulness, as well as train three Indian directors in their unique facilitation style. “We didn’t want to overload anyone with a lot of information,” Gusul explains. “Playfulness and storytelling is how this style of theatre should work. When you introduce the young & the old, natural playfulness will happen; that’s the beginning point of rehearsal, then you transfer that over to story-sharing, and use those stories to create performance.”

Something old, something new 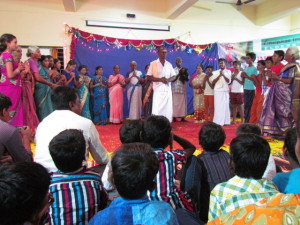 The field school culminated on November 27 with intergenerational theatrical performances at both TEV and the Isha school—a totally new kind of theatre in India, which Gusul makes clear would never have happened without the presence of the field school. “The first time they even started thinking about this was back in 2013 when I first went to this community,” he says. Yet despite the vast cultural distances between the instructors and participants, and the age difference between the performers themselves, the final performances—rooted in the personal experiences of the children and elders—was, as Gusul put it, “a triumph.”

“To create a piece of theatre from something that was spontaneously told to something put on for an audience in just three weeks was truly remarkable,” he says. “They really stepped up to the plate. When it came time to shine, they shone.” 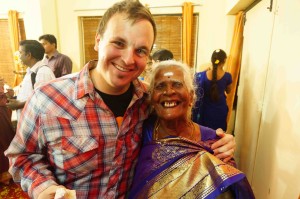 Gusul was particularly moved by one participating elder named Jayama, who shared her own story: traded for a piece of farmland as a dowry, Jayama and her husband worked the land for years until he died, then all three of her sons turned to alcohol and abuse, which is how she ended up in abandoned in the elders’ village. Even worse, the last of her sons died from alcoholism only days before the final performance, with Gusul himself driving her to the funeral.

Yet despite all that, Jayama insisted on performing. “She told me that she was really sad to have lost her son, but felt fortunate to be in the elders’ village as she had gained so many adopted sons—including the village manger and myself—and would never want to do anything to disappoint us. She said she still wanted do the performance, because it was so important to her,” he recounts. “This speaks directly to the power of what theatre can offer someone: how important it was for her to tell her story, and how important it was for us as a global community to listen. When you want to talk about the absolutely most under-privileged person in the world, it would be from someone in her position: she’s 80 years old, can’t read or write, and had been abused and abandoned by her sons. ” 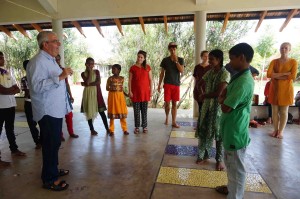 Gusul’s PhD advisor, Theatre professor Dr. Warwick Dobson, joined the field school towards the end of the process, and praised his efforts of all the participants. “The relationships they formed with the elders and students from the different locations were exceptionally strong, and this speaks volumes for their commitment and dedication to the whole Intergenerational Theatre project,” he says. “The final performances were truly magical events. What has been particularly impressive about the whole initiative is that Matthew took great care to involve two Indian directors from Pondicherry University in the devising process.”

Even though the UVic students have now returned, the success of Gusul’s project has ensured it will continue. One of the Pondicherry directors will continue working with the company from January to June 2015, with three more intergenerational theatre companies to be formed in other parts of India over the next 12 months thanks to the support of the HelpAge India NGO, who have supported this initiative from the beginning. “It has been a truly transformative experience for all of us who were fortunate enough to be a part of it,” says Dobson. 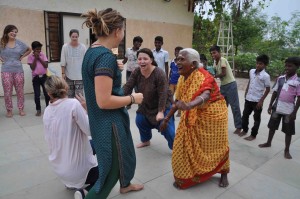 Gusul himself will return to India in June, but sees success as more than just the field school’s imapct. “The Tamaraikulam Elders’ Village is a beacon of hope for elders everywhere in the world,” he says. “It’s filled with people who were poverty-stricken beggars, dayworkers and farmers their entire lives . . . but they aren’t given money, just food, clothes, a roof over their heads and a place to pray and do recreational activities. If you’re an abused elder in Peru, in Africa or here in Canada, it’s inspiring that such a place does exist and is actually making a difference in people’s lives. If it can happen there, it can happen anywhere. It’s more than just a pie-in-the-sky ideal, it’s proof that a better world is possible.”

Gusul praises both UVic and the Department of Theatre’s Applied Theatre specialization—for allowing him to further develop his research into intergenerational theatre. “This is a highly unique project,” he says. “Intergenerational theatre only exists in a few pockets in the Western Theatre world, and this has been the first attempt to spread this methodology to another culture in another country. It is often assumed that people who are in poverty or are very undereducated would struggle to articulate their thoughts, feelings and stories if they were given a platform to have a voice. But this project—and specifically the methodology of intergenerational theatre with the connection to intergenerational playfulness—has shown it is possible for impoverished, undereducated elders and youth to have a voice.” 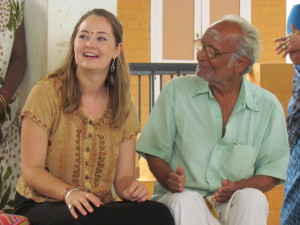 Ultimately, it’s Jayama’s story that Gusul holds closest to his heart, knowing the difference Applied Theatre has made in her life. “I’m really happy that for one single night, we could take one of these elders and help her become a storyteller for her community, he says. “She can tell her story of going through poverty and oppression her whole life, and can now proudly stand up in this village and declare her story. It’s wonderful.”

—This piece originally ran in the January 2105 issue of UVic’s Ring newspaper. Matthew Gusul will also be the keynote speaker at the 18th annual Visual Impetus Graduate Student Research Symposium in the Department of Art History & Visual Studies, running January 23 & 24 in Fine Arts 103.