MARCH 13 UPDATE: Following the advice of the Provincial Health Officer, gatherings of more than 250 people are now cancelled. As a result, this current production of The Children’s Hour has been cancelled. Ticket holders will be contacted by the Phoenix box office.

Within the context of today’s politics and accusations of “fake news,” Department of Theatre professor and director Peter McGuire believed that it was important to look back to a previous time in history and chose a period drama about a valiant struggle for truth. With that in mind, UVic’s Phoenix Theatre is proud to present Lillian Hellman’s 1934 classic The Children’s Hour, from March 12 to 21, 2020.

Set in 1937 in New England, with fascism on the rise in Europe, The Children’s Hour tells the story of two long-time friends and headmistresses, Karen and Martha, whose reputations are threatened when Mary, a spiteful student, lashes out by whispering a lie.

Director McGuire was struck by the pertinence of the play when he first saw it at the Shaw Festival in 1997 and feels it has only grown in relevance. “This play holds up a mirror to the audience and says, ‘See these people? This is us—a reflection of the society in which we live.’”

Another era of lies & propaganda

Hellman’s first play, The Children’s Hour was extremely controversial when it was produced in 1934. It was being considered seriously for the Pulitzer Prize for Drama, but the judges were accused of rejecting it because of the play’s reference to the two women having an affair. (One judge refused to even watch the play.)

“Important plays ask big important questions,” says McGuire. “Lillian Hellman lived in a time of political conflict similar to that of today. It’s part of what makes this piece so timely.” 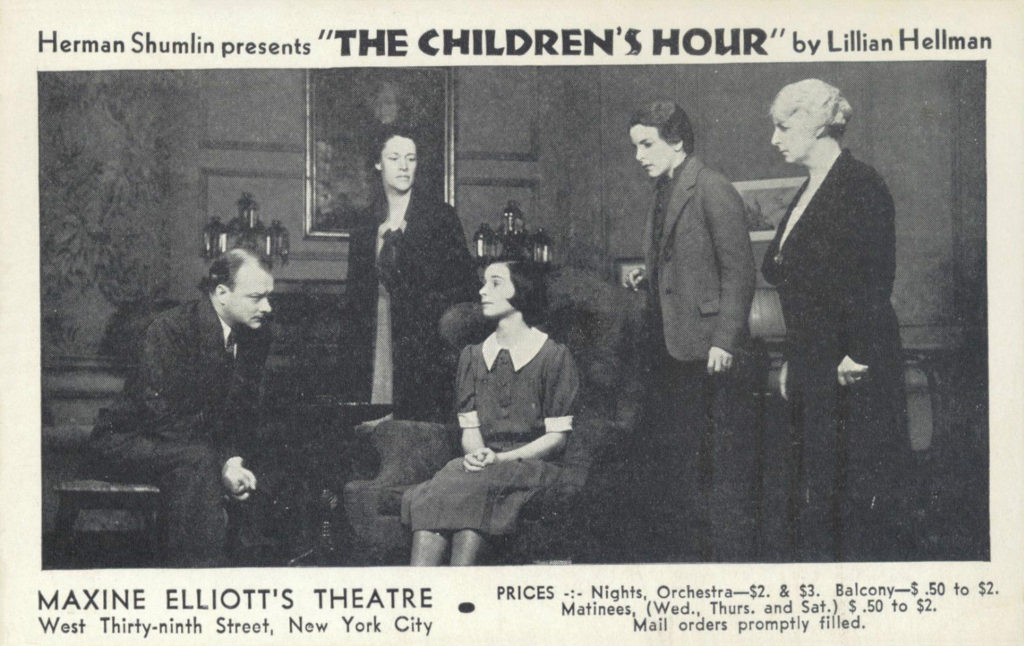 Outraged by the Pulitzer decision, the New York Drama Critic’s Circle responded by awarding its own award the next year. In following years, many municipalities banned it from being produced in their towns. After a revival on Broadway in 1952, it was also adapted into a 1961 Hollywood movie featuring Audrey Hepburn, Shirley MacLaine, and James Garner.

Setting the stage for student achievement

McGuire has worked with student designers to create a world both realistic and nostalgic. The headmistresses’ school is set in a bright and cheerful farmhouse, designed by fourth-year student Emily Friesen. With nine-foot-tall windows, cosy furniture and period wallpaper, the set evolves with the progression of Mary’s deceit. In contrast, the austere home of Mary’s grandmother is dramatic and dark. 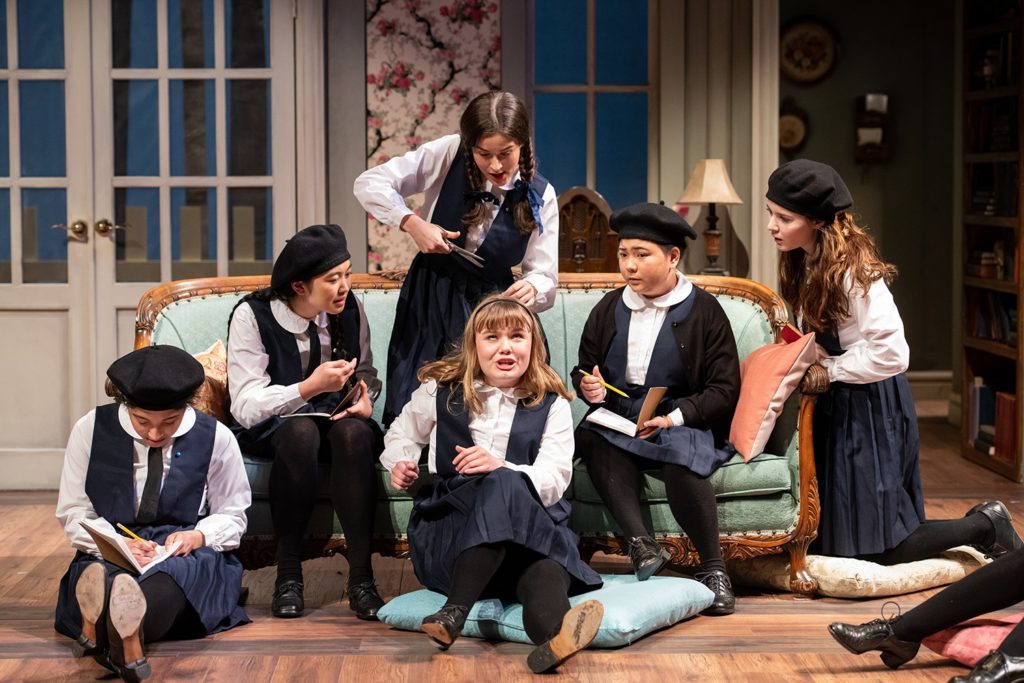 The costume design by third-year student Brodie Needham gives each student a distinct personal style within the restrictions of their 1930s pinafore uniform. The costumes for Karen and Martha also transition to reflect their changing circumstances. Masters candidate and lighting designer Zhe (Harry) Lin captures the passage from day to night and back again. 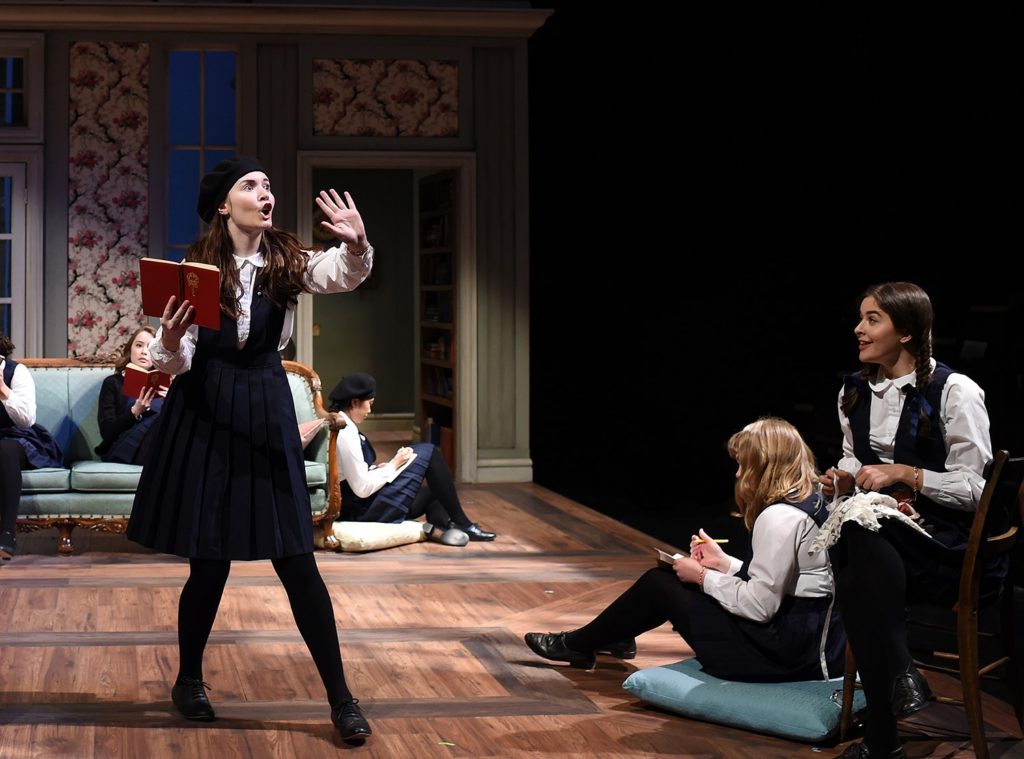 Fourth-year student and sound designer Aaron Smail chose the American composer he was named after (Aaron Copland) to evoke the many colours of New England. The orchestration begins rich and full, but slowly simplifies, peeling away instruments over the course of the play. Third-year student Cassie Holmes is the stage manager.

A free preshow lecture is offered at 7pm Friday, March 13, with Dr. Michael Nowlin, a professor of pre-WWII American literature and the Chair of UVic’s Department of English.

The Children’s Hour previews  at 8pm Tuesday-Wednesday, March 10-11 (day-of tickets just $8 after 5pm), then runs at 8pm March 12-21, Tuesday to Saturday, with 2pm matinees on March 14 and 21. There is also a special Vocal Eye performance at 2pm Saturday, March 21,  with live description for the visually impaired.