“Mix ups, mayhem and a gay wedding… of course the phrase gay wedding has a different meaning now… but back then it just meant fun, that’s all this show is – fun!” says the Man in the Chair as he reads the back of the record cover of his favourite musical from 1928: The Drowsy Chaperone. But this fictitious musical is the foundation for the real 2006 Broadway hit musical of the same name, running at the Phoenix Theatre from November 8 to 24. 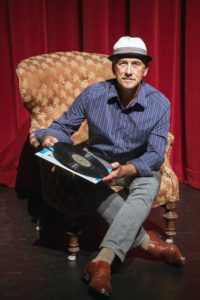 “It’s a fun pastiche of old Broadway and the music is really quite lovely,” says internationally renowned director, choreographer and adjunct Department of Theatre professor, Jacques Lemay, who is the guest director and choreographer for the UVic production. “It’s remarkably both nostalgic and current, as we watch the parody of the past through the eyes of the imaginative, agoraphobic and slightly sarcastic narrator, the Man in the Chair, who’s stuck here in the present.”

The real magic of The Drowsy Chaperone is derived from the transformation of the Man in the Chair’s shabby one-room apartment where he listens to his records and escapes into the glamorous world of his musicals — in this instance, the glittering world of movie stars, highfalutin’ mansions, fantastical weddings, and of course, menacing pastry chef gangsters. Collaborating to create this illusion is a stellar design team of UVic alumni, including set designer Bryan Kenney (MFA ’12), costume designer and PhD candidate Graham McMonagle (MFA ’17) and lighting designer and professor Patrick Du Wors (BFA ’02). Another PhD candidate, Nancy Curry, is the music supervisor and vocal coach, and two current fourth-year students are sound designer Eva Hocking and stage manager Emily Lindstrom.

Indeed, The Drowsy Chaperone is the biggest song-and-dance show the Phoenix has presented in well over a decade: so much so that an entire set of dance shoes were needed for the 19-person cast. “The entire department has been anticipating this production since it was announced last spring,” says chair Allana Lindgren. “Jacques has such an impressive history — from the Royal Winnipeg Ballet to the opening ceremonies of two Olympics and Commonwealth Games — [so] we know are in good hands.” 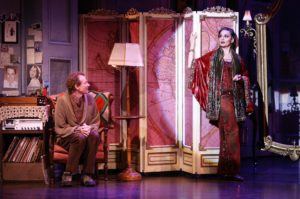 Eight years before it was the five-time Tony Award-winning Broadway musical, The Drowsy Chaperone was a skit performed at a stag party for the marriage of two Toronto actors, Bob Martin and Janet Van De Graff. If the names and the plot sound familiar, those names are still reflected in the characters of the soon-to-be-betrothed couple in this musical-within-a-play. Bob Martin, the groom (the actor, not the character), enjoyed the performance so much, he joined the writing team of Don McKellar (Highway 61, Thirty Two Short Films About Glenn Gould), Lisa Lambert (Slings and Arrows) and Greg Morrison (Mump & Smoot), creating the iconic central character of the Man in the Chair.

The Drowsy Chaperone was then remounted for the Toronto Fringe Festival, winning rave reviews and attracting the support of Toronto über-producer, David Mirvish. Since then, it has been performed everywhere from Broadway to London’s West End, making toes tap and capturing the hearts of musical lovers around the world. 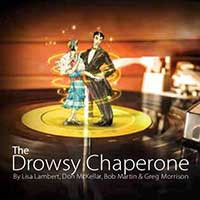 And while the show is based on a fictional musical, the Broadway nostalgia parodied in The Drowsy Chaperone is very real, as Theatre historian Anthony Vickery will discuss at the free Preshow Lecture starting at 7pm Friday, November 9.

Ultimately, the Phoenix production — complete with a custom-built propeller plane — will literally do, as the Man in the Chair says, “what a musical is supposed to do: it takes you to another world.”