As the final notes vibrated through the concert hall, the first violinist stood to address the audience again. “Any other ideas for where we should sit?” he asked. 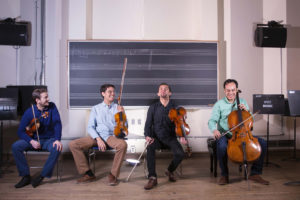 Hands of audience members shot up, and a young student offered, “How about cello and viola at the front, violins at the back?”

The four musicians nodded, then bustled into a new formation, before playing the same piece for a third time. The audience listened carefully for the change in sound, appreciating, perhaps for the first time, the influence of such decisions.

Cuarteto Chroma’s interactive public performance at UVic’s Ideafest led the audience through several exercises that illustrated the complexities of this quartet’s journey of growth and learning. All four members of this quartet moved here from Mexico to earn their Master’s in Music Performance (with an emphasis on string quartet), under the mentorship of UVic’s artists-in-residence, the Lafayette String Quartet (LSQ).

Made up of Ilya Gotchev, Carlos Quijano, Felix Alanis and Manuel Cruz, Cuarteto Chroma are the first quartet to take part in this one-of-a-kind program in Canada, which is modelled on prestigious programs at universities in the United States. It provides a unique and hands-on learning opportunity for a quartet to earn a collaborative performance degree with guidance from members of a well-established and successful quartet — the LSQ.

LSQ violinist Ann Elliot-Goldschmid explains that this type of training is vital to the success of a quartet. “You hone your skills to be the best you can possibly be on your instrument, then bring those skills into the ensemble, matching the timing, harmony, vibrato, bow speeds and articulation of the others. It’s a magical process but it takes an enormous amount of work.”

The Watsons’ passion for music 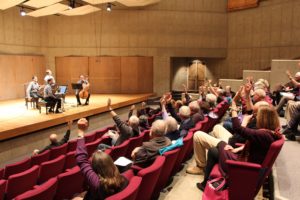 Cuarteto Chroma’s fellowships are funded by a bequest from the late Claire Watson Fisher, through the Victoria Foundation. Claire grew up in a music-loving family in Montreal. Her mother, Cecile, belonged to several musical organizations and her father, William Watson, was one of the founders of the Montreal Symphony Orchestra.

During World War I, Claire worked for the Canadian Red Cross in England and France, where she received several awards for her service. Her career in Fine Arts began after the war, when she worked for her father’s art gallery, then the Art Gallery of Ontario, and finally, the National Museums Department in Ottawa. After retiring, she and her husband moved to Victoria.

“Her love of music was a passion, and it inspired her to give back to the art form that had given her so much pleasure and joy”, says Louise (Watson) Slemin, Claire’s sister. “I only wish Claire had known the extent of her bequest.”

That extent of the gift is still being discovered by the university as it unlocks the potential of this new program.

“This funding brings a very high-level, prize-winning quartet to UVic, which elevates the learning and research in the whole music department” says Ann. “It’s inspiring for other students to be around this level of professionalism, in practice rooms, or alongside them in the orchestra.” 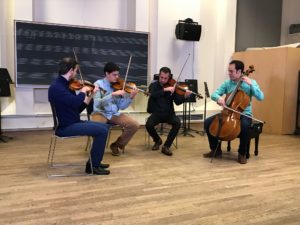 Cuarteto Chroma brings benefits to the greater community, through playing at local schools, at benefit concerts, or at public events such as Ideafest. When they travel for concerts, festivals and competitions, they raise awareness of the calibre of UVic Music around the world. After witnessing the quartet’s significant improvement, Ann thinks they could have an even greater impact—at UVic and beyond—during their second year.

The opportunity to coach the four musicians has been a highlight in LSQ’s long residency here at UVic. “It’s a real joy. Like all teachers, our wish is to have our students eventually surpass us. We longed for UVic to develop something like this for many years and Claire Watson’s bequest gave us the opportunity. We’re hopeful we can continue to fund graduate quartets after the gift from this donor has been spent,” says Elliot-Goldschmid.