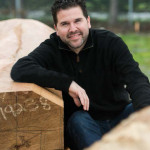 It has been a busy couple of years for Rande Cook. Beyond his duties as chief of Vancouver Island’s ’Namgis Nation and his commitments as an in-demand contemporary artist with an international practice, Cook just completed two back-to-back terms as the Audain Professor of Contemporary Art Practice of the Pacific Northwest with the Visual Arts department.

“Two years in the position allowed me to really reach students,” says Cook. “I was able to delve into the role art plays in politics, and got them to dive deep within themselves. I pushed my students a lot and they seemed to appreciate that — the feedback at the end of the year said it was one of the more profound classes they had ever taken, because it challenged them internally.”

More than just creating a challenging course, however, Cook found the Audain Professorship provided him with the chance to bring his own artistic training into play. 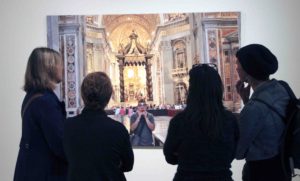 “Having the opportunity to share what I do from a strong First Nations background was key,” he explains. “Bringing that knowledge into an institution where students don’t really understand traditional teaching gave me the chance to share the real foundation of what the art is: that it comes from a sacred place, that the teachings are sacred.”

As he reflected in this interview following his first year in the position, “I wanted to design a course around the work I’m doing right now, which means looking at the Truth and Reconciliation Commission, the murdered and missing Indigenous women, Idle No More, the REDress project, the round dance movement . . . about healing and bridging.” 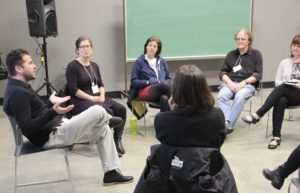 Now he feels two years in the position allowed him greater freedom to explore key concepts. “I could break down the art form into its elements and show them how to put it back together. It was like dissecting a symphony: a violin can play anything, once you learn it, but it’s up to you to decide the song and how it should be played.”

Beyond his time in the classroom, Cook was also frequently seen around UVic in his role as chief, participating in events at First Peoples House, drumming for ceremonial openings, speaking at educational conferences, and taking part in discussions about greater indigenization on campus.

Cook also presented a retrospective of his work in October 2016 as the annual Audain Exhibition. Held each fall in the Audain Gallery, Cook’s Accumulation was timed to coincide with Intersections, a combined conference by the BC Art Teachers Association and the Canadian Society for Education through Art. A highlight of the event, Accumulation also provided context for remarks by Cook, who led a workshop at the conference — which also featured a keynote address by Michael Nicoll Yahgulaanas, a former Audain Professor himself. 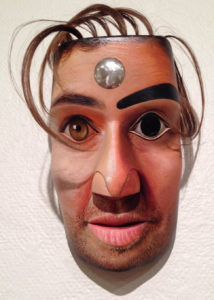 Among the pieces on display at Accumulation was a mask collaboratively created with local artist Carollyne Yardley. Aptly titled “/kəˌlabəˈrāSH(ə)n / Collaboration Mask,” the piece is a good example of both Cook’s connections with Victoria’s greater arts community and his contemporary take on traditional art forms.

“in an era of reconciliation, art has once again become a node through which native and non-native engagement is flourishing through agendas of healing, understanding and respect . . . ‘/kəˌlabəˈrāSH(ə)n / Collaboration Mask’ is an aesthetic response to this cultural resurgence in Canada,” writes Fine Arts alumna Dr. Andrea Walsh in this short essay about the piece.

And does he think an important part of the Audain Professorship is to have a presence both in the community and across campus? “I really do,” he says. “I don’t find there’s a lot of true Northwest Coast representation in Fine Arts — there are people who study and teach it, but authentic Northwest Coast artists like myself are rare. Having people in those positions who can speak to that is important.”

Cook also feels it’s important to transcend academia’s traditional definitions. “There are no walls within our culture. I sat in a lot of meetings where people were saying, ‘We want to indigenize the university, how can we incorporate more indigeneity?’ But we don’t have walls between history and music and practice . . . if someone in the Audain position could keep that idea alive, it would be very beneficial.” 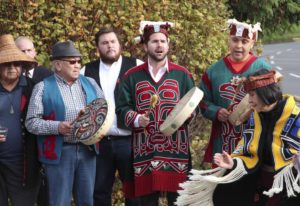 Cook (centre) at the opening of UVic’s Michael Williams building

Much like the bridges he builds with his art, Cook feels reaching new communities is an important part of his role as chief and educator.

“Overall, the Audain position gave me the opportunity to share a deeper, profound understanding with everyone — not just the art form, but where it comes from and what it’s about. You can see native art all over the place now, but there’s a deeper meaning to it . . . especially when you’re wanting to learn, to develop the skills.”