When Theatre alum Charles Ross (BFA ’98) debuted his One-Man Star Wars Trilogy back in 2002, the cultural landscape was quite different: audiences were already becoming jaded by the new prequels, spin-offs like Rogue One, The Clone Wars and Solo were as yet unimaginable, and Disney ownership of the series seemed an Imperial ploy at best. 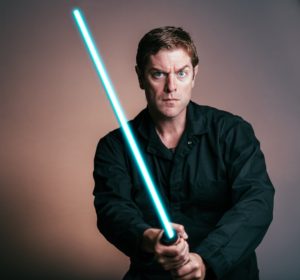 But where Phantom Menace and Attack of the Clones fell flat with most viewers, Ross’s high-speed paean to the original trilogy found a ready audience, thanks to his remarkable mimicry, boundless on-stage enthusiasm and sincere love for the series. Now, 17 years and literally thousands of performances later, the 44-year-old Ross is still up to his Jedi mind tricks and happily reports that none of it feels forced.

“I’m certainly not sick of it,” he admits. “I still love it as much as I did when I was a kid, because love doesn’t diminish. Every time I do the show, there’s something about that feeling I’m trying to share — a simple early love for the story — and that’s what people recognize in themselves.“

Ross will be back at UVic with a special presentation of his One-Man Star Wars Trilogy on May 4—that’s Star Wars Day (“May the Fourth be with you”)—at The Farquhar in UVic’s University Centre. Tickets range from $15.75 to $32.75 at the UVic Box Office. 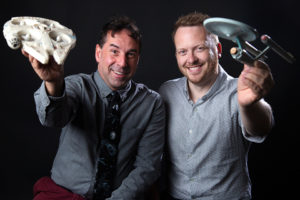 Read more about the courses offered by Christopher and Hodge in this 2018 article in UVic’s Ring newspaper.

What started out as a niche play for sci-fi nerds has since grown alongside the franchise itself: now 10 films in and, with the “Skywalker Saga” coming to a finale in 2019’s Episode IX, Ross has seen his own solo show go global as well. “There isn’t a part of the planet Star Wars hasn’t touched,” he says. “It’s become much more homogenous, more a part of popular culture: you can just be a normal person and get the references—it doesn’t qualify you as a nerd anymore, just as a human being who’s seen the movies.” (Indeed, UVic even offers a Star Wars elective now.)

Officially endorsed by Lucasfilm, Ross’s 75-minute show has been performed for over a million people worldwide, including extended runs off-Broadway, in London’s West End and at the Sydney Opera House, as well as appearances on the likes of Late Night with Conan O’Brien and the popular How Stuff Works podcast. 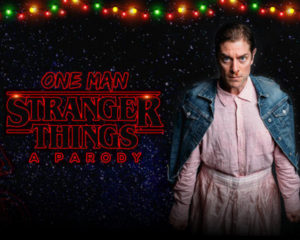 The latest parody by Ross

And it shows no sign of slowing down: regular North American dates aside, since 2006 Ross has toured to Australia eight times, the Edinburgh Fringe Festival nine times, the UK 12 times, and has performed to audiences in Malaysia, Singapore and China. In 2017 alone, he spent 175 days on the road with it.

“Star Wars has a huge reach,” he says. “My name doesn’t mean much to many people, but the concept certainly does. There are housewives in the American Midwest who still know my work from seeing me on The Today Show a decade ago.”

The once and future one-man

And while Ross has developed a series of other solo shows over the years — including the One-Man Lord of the Rings Trilogy, One-Man Dark Knight Trilogy, One-Man Pride & Prejudice and, most recently, One-Man Stranger Things (many of which were directed by and co-created with fellow Theatre grad TJ Dawe) — time has proven that love for the original Star Wars trilogy endures.