While their printed format may have changed, the local Monday Magazine is still running their annual M Awards honouring what they describe as “Greater Victoria’s best and brightest in the arts and entertainment field.” Fine Arts faculty, students, staff and alumni have been frequent nominees and winners in the past, and this year’s lineup is no different. 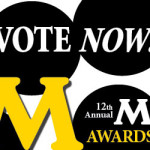 Rather than list all nominees in each category, we’ve just listed the Fine Arts associated nominees below, and you can vote online here. According to the rules, you can only vote online once, and must vote in a minimum of 20 categories. Voting closes at 5pm Friday, May 30—and you’ll automatically be entered to win $75 at Zambri’s.

Be sure to add your vote to the efforts of our top achieving faculty, staff, students and alumni!