Some students start in Fine Arts, while others find their way here. Slide History in Art Honours student Regan Shrumm into the latter category. After starting in the English department, Shrumm found her way to our side of the Ring Road when she signed up for Melissa Barry’s Impressionism in Art class as an elective. She liked it so much she took other History in Art electives with professors Marcus Milwright and Eva Baboula, and then simply decided to switch midway through her first year.

“I’ve always been interested in history, but I took a couple of history courses and found they were just numbers—they didn’t describe the society,” Shrumm explains. “But in History in Art, they tackle the whole society, the culture of it all—which I love. That’s what I’m interested in; not major events. I always got the best professors in this department.” 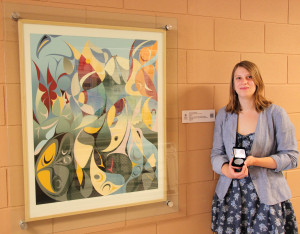 Humanities loss was Fine Arts’ gain, however, as Shrumm flourished in her new faculty. Winner of the 2013 Victoria Medal—awarded annually to the student with the highest GPA in the Faculty of Fine Arts—Shrumm achieved an enviable graduating average of 8.48 and is described by History in Art chair Dr. Catherine Harding as “a remarkable student” who “brought a lively, vibrant spark” to her classes.

But far from simply earning good grades, Shrumm’s passion for the arts led her into various curatorial positions with the likes of the Legacy Art Gallery, the Quilt and Textile Museum in La Conner, Washington, and her current position at downtown’s Open Space Gallery. She also successfully completed a Jamie Cassels Undergraduate Research Award in 2011-12, where she researched a set of icons and other religious artifacts from pre-revolutionary Russia with the aim of bringing the objects out of storage and into the public eye. “She made these precious items come alive through her focus on their materiality and their special relationship to other artistic traditions, such as the close visual connections between Greek Byzantine and Russian religious culture,” notes Harding. Shrumm’s research was then published in the Arbutus Review and she will be curating an exhibition of these artifacts for the Legacy Gallery in the spring of 2014.

“People don’t come into this field unless they’re really interested, and have a passion for it—the same as all the arts,” Shrumm says. “I always hear Visual Arts students call us the artists who are academics—which is kind of funny, but I think I study art because I can’t do it very well myself. I like to look at the work of others.” 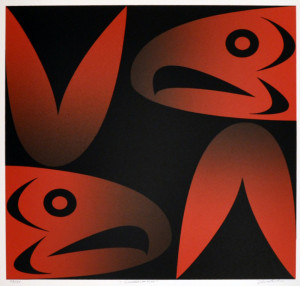 Some of that work would include the Salish Reflections collection of Coast Salish art that is installed throughout the Cornett building. Part of a permanent and rotating series of exhibitions of contemporary art from the University of Victoria Art Collections, Salish Reflections  features the generous gifts and loans of 20 pieces to the Faculty of Social Sciences by George and Christiane Smyth. Selected from the Smyth’s greater Salish Weave Collection, Salish Reflections includes outstanding work by Susan Point, Chris Paul, Maynard Johnny Jr. and lessLIE. The dedication of space in the Cornett building to artistic excellence recognizes the valuable intellectual and cultural contributions made by the arts to research and teaching in the Social Sciences.

As part of her undergraduate work, Shrumm co-designed the Salish Reflections website, updated the hallway displays with QR codes and wrote some publication materials about the collection. “There’s something special about Coast Salish art on Coast Salish land that hadn’t been showcased before, so I wanted to make something that would describe the Coast Salish people, and put a story to each piece of art,” she explains.

Better still, Shrumm’s efforts are just the tip of the proverbial curatorial iceberg: the QR codes she installed will eventually be spreading to the greater University of Victoria Art Collections. “This was just the beginning,” she says. “I think the Maltwood Gallery in the McPherson Library will always have QR codes now, and each piece of outdoor art will eventually get one.”

Shrumm called Mount Vernon, Washington, home before coming to UVic, and she hopes that will give her an edge down the road in her ambition to become a museum curator.  “I’m lucky in that I have dual citizenship, and there are a lot more jobs in the U.S. than in Canada—and a lot of those are in cities where people don’t necessarily want to live, like Alabama or South Dakota,” she chuckles. “I figure I’ll start someplace small, keep gaining experience and building on what I’ve already done; I seem to have more experience than a lot of other people my age, so hopefully I can go for a bit bigger city.”

Despite her JCURA research on Russian religious icons, Shrumm admits to being partial to pioneer villages. “I especially like historical homes, that’s what I’m aiming at. I’ve long had an interest in pioneer life of the 1880s or 1890s. It’s like living history . . . that kind of history is especially intriguing for me.”

Now graduated, Shrumm will return to the History in Art department in September 2013 to begin her Master’s degree, most likely working on First Nations issues in art. “I hope this award impacts my future,” she says. “It says I’m more than the average person, which will hopefully help with job placement. I was actually really surprised that I got it, as I had fellow students who seemed to always do better than me. It’s funny—when they read out my bio, I was, like, ‘Is that me?’” The vibrant Shrumm pauses and laughs. “When you condense it all down, it sounds so fantastic, but it didn’t seem like so much when I was just doing it. Even my parents said that they knew I was doing all these things, but to hear it condensed like that, they were so proud of me.”

As are we all, Regan.