A young girl is born into a world full of faith and family, and as she grows from a child to a teenager, she faces increasing pressure to conform. But what if that 15-year-old is born into a tightly controlled fundamentalist polygamous community — will she dare to take a leap and step into an outside world she’s never known? 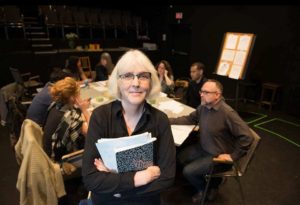 Joan MacLeod backstage at the Belfry in 2016 (UVic Photo Services)

This is the world Department of Writing professor and alumnus Joan MacLeod is exploring in Gracie. Her latest solo show, Gracie was commissioned by the Belfry Theatre as a co-production with Alberta Theatre Projects. A gripping and tender story about growing up unusual, Gracie is set in the radical polygamous sect of the Fundamentalist Church of Jesus Christ of Latter-Day Saints in Bountiful, BC — the largest polygamous community in Canada.

“Perhaps mystery is at the heart of all religions and writing about a place that is full of secrets is impossible,” says MacLeod in her program notes. “But this play began the way all my plays do: by creating one voice and trying to figure out why that voice wanted to be heard.”

As with all of MacLeod’s plays, there is an undeniable timeliness to Gracie: currently three people from Bountiful are on trial for allegedly removing girls from the community in 2004 and taking them across the US border to be wed to much older men in the polygamous community in Colorado City. The verdict in that case is due to be handed down by Canada’s Supreme Court in February.

“Joan MacLeod is one of Canada’s foremost playwrights,” says Gracie director and Alberta Theatre Project artistic director Vanessa Porteous. “Her writing feels like the tide coming in: gentle at first, it gradually sweeps you up, leaving you moved and changed. ATP is proud to have launched three of her plays: The Shape of A Girl, Another Home Invasion, and The Valley, all of which went on to national acclaim. I’m thrilled to direct Gracie, and honoured to work with the Belfry Theatre. [This is] an exciting collaboration, a play of national significance, and a deeply human story.”

Described as “one of the most important playwrights working in Canada today” by the Toronto Star, MacLeod is the recipient of numerous awards, including the Governor General’s Award for Drama and the $100,000 Siminovitch Prize. Her plays—including Jewel, Toronto, Mississippi, Amigo’s Blue Guitar, The Hope Slide, Little Sister, The Shape of a Girl, Homechild and Another Home Invasion—have been translated into eight languages. 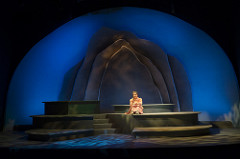 The Belfry’s production of “Gracie”

Gracie, her 11th play, had its world premiere on January 26 at the Belfry, and it received a good deal of coverage, including this Times Colonist preview and another preview in the Victoria News. “I just try to get grabbed by [a subject] and look at it really deeply,” MacLeod told the TC. “My own political agenda, it doesn’t usually remain intact. I don’t want to get too messagey.”

You can hear more about the creation and development of Gracie in this series of B4Play live interviews, featuring CBC On The Island host Gregor Craigie in conversation with MacLeod, Porteous, star Gillian Calder and Department of Writing instructor Marita Dachsel, who has explored the polygamous Mormon community in her book, Glossolalia.

Gracie was also reviewed by the TC, where theatre critic Adrian Chamberlain noted “devotees of this award-winning playwright likely won’t be disappointed . . . . MacLeod approaches her subject with the same gentleness, thoughtfulness and humanity apparent in previous plays such as Amigo’s Blue Guitar and The Shape of a Girl.” The production also earned positive kudos on CBC Radio’s On The Island (no link yet), where CBC Reviewer and Theatre alumna Monica Prendergast was taken by “MacLeod’s huge capacity for empathy . . . in this day and age where everyone is judging everybody, [MacLeod] doesn’t judge; [Gracie] tells her own story without judgement.” 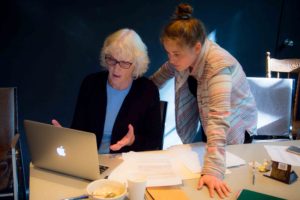 Busy arts blogger Janis LaCouvee also praised this new production in this review. “By turns humourous and transcendent, the script pulls the audience into the world of a child — and anchors firmly there — laughing along with observations about the kilometre signs on the road, rejoicing at the gift of a first doll — before taking them on a quiet journey filled with observation and growth.” LaCouvee also praised the score by School of Music alumnus Tobin Stokes, which “conveys lightness and innocence while simultaneously carrying deep notes of unease and foreboding.”

And Monday Magazine reviewer Sheila Martindale says,” if you feel up to the challenge of confronting life from a different point of view, grab yourself a ticket for this world première.”

Her previous play, The Valley, also appeared at the Belfry in 2016. “How blessed we are to have playwright Joan MacLeod living in our midst,” says Belfry artistic director Michael Shamata. “We commissioned Joan to write a play specifically for this theatre and this audience. Gracie is that play – and it is a beautiful study of a young girl as she gradually develops a sense of self and self-direction. Approaching Gracie’s situation with the same unique absence of judgement that made The Valley so compelling, Joan has given us a moving portrait of a moral quandary.”

Gracie continues until Feb 19 at the Belfry Theatre (1291 Gladstone), and will also run in Calgary from Feb 28 to March 18.