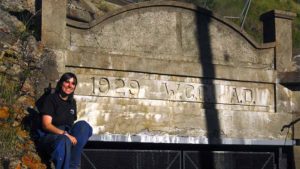 When someone says they’ve been “working in the coal mines”, it’s generally taken as a euphemism for simply working hard. But Visual Arts student Melisendra Daviel has literally been working in a coal mine—the 110-year-old Bellevue Underground Coal Mine in the Crownest Pass town of Bellevue, Alberta. “My basic plan was to do something to do with art,” says Daviel, who graduates with a BFA this month. “And I’m actually doing way more art at the mine than you’d think.”

After spending two Co-op work terms at the mine, Daviel has now returned as a full-time employee. Primarily, she leads educational tours, informing tourists from around the world about the coal mine’s history, dangers and equipment. But, given her Visual Arts background in drawing, painting and sculpture, it wasn’t long before she found a way to put those skills to use—making “mine mice” to be sold in the gift shop. Constructed from oven-baked modelling clay built over wire and tinfoil armatures, her mice are dressed in period mining gear, making them not only cute and popular but also historically accurate. 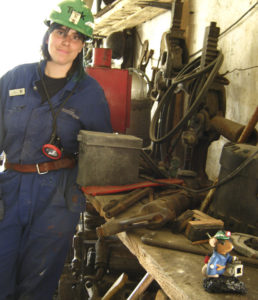 Daviel with one of her mice

“The miners liked the packrats in the mine, because they could sense danger before the miners could—so if they saw all the packrats headed for the exits, the miners would follow them out.” Daviel’s mine mice come complete with all manner of detailed equipment: picks and drills, explosives, coal cars, safety phones, emergency breathing equipment. “It’s fun to see how much detail I can get in such a small space,” she laughs.

Her favourite design is a mouse eating a sandwich, because it’s representative of a little-known historical fact. “The miners would save the corners of their sandwiches for the packrats so they would stay around. They couldn’t eat the edges of their sandwiches anyway, because their hands were covered in coal dust.” Daviel has also put her artistic skills to work designing and building a float for Bellevue’s annual parade, and her next project is producing a colouring book for the gift shop as well.

While both of her parents work at Vancouver’s TRIUMF physics laboratory, Daviel looks forward to finding new ways to put her BFA to work in the future. “This is probably the closest I’ve come to a job relevant to my degree, because I got paid for making mine mice and doing other art-based things—which is pretty funny, considering it’s not in the job description,” she says with a quick laugh. “There are unexpected opportunities in any job. If you stay true to yourself and bring your own flavour to the workplace, you’ll end up doing things you never expected.”