In 1963, National Film Board director Léonard Forest travelled from Montreal to the west coast to direct a documentary about artists and poets working in Vancouver and Victoria. Forest said he came here with “zero idea” of what he would find. He made the resulting 27-minute film, In Search of Innocence, with an innocent eye. 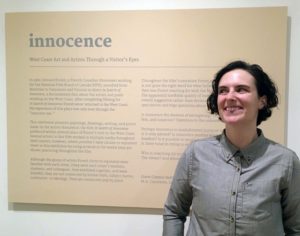 Now, the latest Legacy Gallery exhibit, Innocence: West Coast Art and Artists Through a Visitor’s Eyes pairs the original NFB documentary with work by artists featured in the film — but guest curator Nellie Lamb also examines the notion of innocence as it pertains to the West Coast in the 1960s.

Curious to learn more? Lamb will be giving a special curator’s talk and tour from 3-4:30pm Saturday, February 3.

Lamb says she first saw the NFB film back in 2013, when her mother gave her a copy for Christmas. “My dad, Fred Douglas, appears in it,” she explains. “He passed away when I was 12 so I’ve been getting to know him as an adult through documents like this, and through his friends, co-workers and students.” 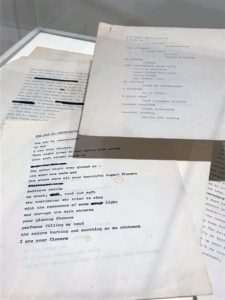 Some of Fred Douglas’ original manuscript pages appear in the exhibit

Douglas was a noted Vancouver artist who eventually joined UVic’s Visual Arts department as a professor.

She calls it a “happy accident” that UVic’s impressive art collection holds pieces by some of the artists in the film; the exhibit also features some pieces on loan from UBC, SFU, and the AGGV. “That’s one of the fun things I’ve found about researching local artists, often their work is right here where we can see it up close.”

Lamb says she tried to select works that were created close to the time In Search of Innocence was shot. “Margaret Peterson’s ‘Horos, The Welcome Figure’ (1962) was actually in her solo exhibit at AGGV, which is shown in part in In Search of Innocence,” she explains. “ ’Horos’ also relates to the idea of the West Coast as a place that is — at least in some imaginations — ‘natural’ and ‘mystical.’”

Was there actually a sense of innocence among west coast artists of the 1960s? “I think Forest’s use of the term ‘innocence’ is much more nuanced and nebulous than what we typically use the word to mean,” Lamb explains.

“Part of my research is about teasing apart what he might have meant and I think what he meant has many facets, depending on which artist he was looking at. For example, Jack Shadbolt’s search for innocence was different from Al Neil’s. Forest features a diverse group in his film . . . [but] the artists in In Search of Innocence wouldn’t have called themselves innocent.” 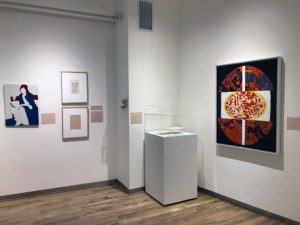 Yet Lamb does acknowledge that “the west” has long been seen as a place of opportunity, and that “unrealized opportunity” itself is a type of innocence. Add that to the continued perception that the West Coast is distant from the art-world centers (Europe, New York, Montreal, Toronto), and that West Coast cities like LA and Vancouver are “culturally devoid” compared to their eastern equivalents.

“Of course, anyone involved in the arts communities out here knows that’s untrue,” insists Lamb. “But being removed from these major art centers, and choosing to remain physically and sometimes ideologically marginal, can be seen as an innocent choice or, a search for innocence.”

The researcher as audience & curtor

As an AHVS grad student, Lamb says her Legacy exhibit is just one part of a larger research project focusing on documentary film theory, building a history of Vancouver and the West Coast in the 1960s, and considering her own role as audience and curator.

“Sometimes seeing something we are familiar with through another’s eyes reminds us how incredible that thing is,” she explains. “I hope visitors leave the gallery with a feeling of wonder about the place that we live, and the artists who have worked here for thousands of years and continue to . . . . that’s the feeling in [both the film] and the artworks in this exhibition give me.” 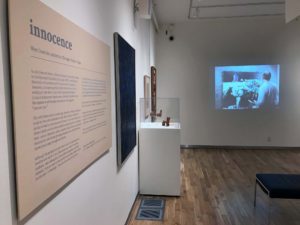 Originally from Vancouver, Lamb chose UVic for both her undergraduate degree and her graduate work. “I’m from Vancouver and I had originally planned on moving back there after graduating with my BA . . . . [but] I’ve found that both the AHVS department and Victoria’s art community are overflowing with opportunities for students to put their research and related skills into practice.”

Despite the 55-year gap between the NFB documentary and now, when urban growth and development have radically changed both the physical and cultural landscape, Lamb feels some things do remain recognizable.

“I bounce back and forth between lamenting how much has changed — how much has been lost to development and rising cost of living — and then noticing how much is the same,” she says. “The land is still awe-inspiring, there are still diverse and interconnected communities of artists working in just as diverse media, and some of them are still searching for the same ineffable thing that Forest called innocence.”