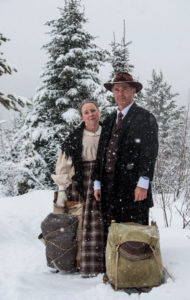 Each fall, Phoenix Theatre’s Spotlight on Alumni offers the chance for returning alumni to share their experiences with both audiences and current students alike. This year’s spotlight features a pair of performers who are currently living their dreams, every day, as writers, performers, directors and filmmakers—as well as husband and wife: Danette Boucher and James Douglas.

These two talented UVic alumni are making history — literally — every day, working in BC’s fabled Barkerville Historic Town. And now, on stage at the Phoenix from October 10 to 21, Boucher and Douglas will present the stories of two BC pioneers who traveled west in search of a new future: Lady Overlander and The Fred Wells Show. But whether backstage or in the classroom, Boucher and Douglas will mentor current students, offering guidance on how they too can navigate life’s journey and achieve their dreams.

Donning hoops, petticoats, bonnet and a classic Victorian cotton dress, actor and playwright Danette Boucher’s “office” looks like a 19th-century ghost town, albeit bustling daily with tourists from across Canada. In truth, Barkerville is one of BC’s most frequented and important heritage sites — and has a long history of hiring Phoenix students and alumni to perform in the park. Together with her husband — actor, director and filmmaker James Douglas — Boucher has spent decades telling the stories of Barkerville’s past, and they are now both part of the park’s artistic and management team.

Their passion for history also led Boucher and Douglas to create Histrionics Theatre Company to better tell their favourite dramatic stories from our past — including current productions Lady Overlander and The Fred Wells Show, each featuring actual historical characters on their own quest for gold. 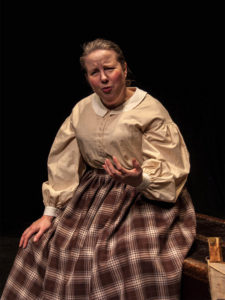 A scene from Lady Overlander

“I first stumbled into museum theatre in 1989 while auditioning to play Emily Carr at her childhood home in James Bay,” says Boucher. “I didn’t know then that it would lead to an exciting career in museum theatre and historical interpretation.” Beyond Barkerville, Boucher has also developed programming for the Royal BC Museum, Helmcken House, Craigflower Farm and Schoolhouse, Point Ellice House and Tod House. Many may also remember her as the “unsinkable” Margaret Brown, a character that she performed for the RBCM’s Titanic: The Artifacts exhibit.

“Over the years of interpreting BC’s history, it has given me great joy to watch stories and ideas morph as we mature and strive to understand who we are, as a result of who we have been,” she reflects. “At the start of my career, we celebrated our pioneer stories and often neglected the darker, less well known, aspects of our founding. 30 years later, we are eager to question and reframe our stories, considering many angles and experiences.”

Her play, Lady Overlander, is a dramatic first-person account of the legendary Catherine O’Hare Schubert, who — while pregnant! — walked from Winnipeg to Kamloops in 1862 in search of a new life in a tantalizing new land. Meanwhile, The Fred Wells Show also tells a fascinating but little-known story from a gold rush during the Great Depression: Wells, an introverted yet charismatic American prospector, persevered against the odds until he finally struck gold just outside of Barkerville. The ensuing 1930s gold rush saw thousands of fortune seekers flock to the town named in his honour, and saved countless BC families from poverty during very desperate times. 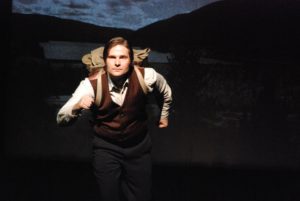 A scene from The Fred Wells Show

“These scripts were written with love for my home province, but are also part of a desire to understand what happened when BC was first defining itself,” says Boucher. “BC history is like the best book I have ever read, with chapters that are celebratory and adventurous, and chapters that are gut wrenching and painful. When I write, I am driven by the idea of home, how we find it, and what it means to each of us.”

The couple make their year-round home in Wells, just outside of Barkerville, with their twin daughters. Although both Danette and James attended UVic’s Department of Theatre —  twice each — remarkably, the couple didn’t meet until they worked together in Barkerville. You can read more about Boucher and Douglas in this October 5 Times Colonist interview.

Despite their lives up north, Victoria and UVic are still a big part of both their lives and their work. “Victoria has a really strong heritage and theatre community that work together well,” says Boucher. “The Phoenix is a special place for us both, a place we both called home for an important time in our lives. Even though we attended at different times, we still share many common experiences . . . and so, so many common friends.”

—With files from Adrienne Holierhoek