Sara Topham on the Importance of her Broadway debut 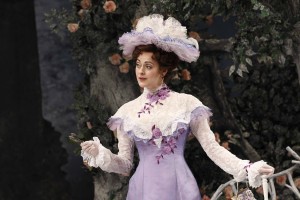 She’s played Stratford for more than a decade and earned raves for her work at the Belfry; now, Sara Topham, BFA ’98, can add one more feather to her much-plumed theatrical hat: conquering Broadway. Topham just spent the winter appearing in the Oscar Wilde classic, The Importance of Being Earnest, alongside veteran performer and director Brian Bedford. Already a hit during the 2009 Stratford Festival, Earnest was remounted on the Great White Way in December 2010, and Topham was one of only thee members of the original production asked to reprise her role—playing Lady Bracknell’s vivacious daughter, Gwendolyn, to Bedford’s own cross-dressing turn as Lady Bracknell, no less. Yet despite the play’s vintage (Earnest debuted in 1895 and hasn’t appeared on Broadway in 33 years), Wilde’s comedy of errors clearly still clicks with New Yorkers, as it’s currently held over until July 2011.

“It’s a perfect play,” offers Topham on the show’s continued success. “Human beings haven’t changed over the century—mistaken identity, people in love and being thwarted, two guys competing with each other—it’s instantly recognizable if you’ve ever watched a sitcom. Dare I say the quality of the writing is significantly higher, however . . . it’s like spun gold, and it’s a joy to do.”

Clearly influenced by her years performing the likes of Shakespeare and Shaw, Earnest has also been a great showcase for the effusively eloquent Phoenix Theatre grad. Variety described Topham’s performance as “vivacious” while the New York Times felt she played her part with “silken self-satisfaction” and looked “ravishing in [her] most beautifully wrought costumes.” But while show business tradition insists that performers not read their reviews, does she sneak a peek when they’re this strong? “I do not,” Topham says, with just the right touch of earnestness. “Of course, when they’re as good as these ones clearly are, it’s impossible not to have a sense of that—especially when they’re printed up in front of the theatre. But I manage not to look at them as I walk by.”

And as an A-list Phoenix alum, does Tophahm have any advice for current UVic students? “Mainly that it is possible to make a living pursuing this—particularly when you live on an island, where you often feel isolated and wonder if the bridge from the student world to the real world even exists,” she offers. “When you’re in school, it’s important to know that it is possible, and that everybody has been where you are at some point or other. You just have to keep moving forward.”

Alas, while Earnest will continue playing into the summer, Topham herself will be moving back to Stratford this spring to prepare for her 12th season—this year playing Olivia in Shakespeare’s Twelfth Night, as well as Celimene in Moliere’s The Misanthrope. Still, despite what she cheerfully describes as the “great adventure” of it all, there is one down side to her New York run. “I no longer have the opportunity to make my Broadway debut,” Topham sighs happily, “as I’ve now made it!”