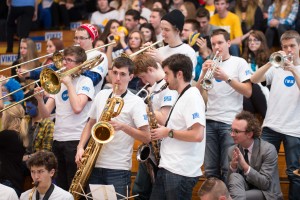 A new initiative between the School of Music and Vikes Athletics, Vikes Band (MUS 189) is a new for-credit course that will rehearse and perform at Vikes Varsity events and special events on campus. If you played in your high school band or just play for fun, you can still put those skills to use to play game-day music—even if you aren’t a Music major.

“The Vikes Band will make an incredible contribution to creating the most unique and exciting venue in Canadian Interuniversity Sport,” says Vikes Athletics director Clint Hamilton. “Joining the Vikes Band will make you part of our team as we make our athletic venues energizing, fun and inspiring for our home crowds and a challenge for our visiting opponents. The Vikes Band will be a great way to engage with UVic and show your team spirit as you join Vikes Nation and bring your talents to the team!” 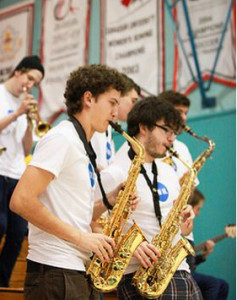 Open to any student with the basic ability to play a band instrument, Vikes Band is a 1.5 unit course that can even be taken more than once, to a maximum of six units. Better still, there’s no audition necessary!

“This band is both a way to increase school spirit and bolster the atmosphere at sporting events while also giving a fun musical outlet for UVic’s entire population,” says School of Music professor and Vikes Band leader Scott MacInnes. “A dedicated Vikes Band is something that has been a long time coming—and now that it’s here there’s a buzz around the entire city that’s so exciting.”

While the School of Music jazz band has been playing at key Vikes games since 2013, the idea of creating a dedicated band course has been in the works for a couple of years now. “Now that UVic has a top-notch athletics facility like CARSA, it seems only logical that there is a dedicated ensemble to bring live music to already great sporting events,” says MacInnes. “Having a live group at the games will create a level of excitement and energy that will be felt not only by the fans but also by the Vikes athletes.” 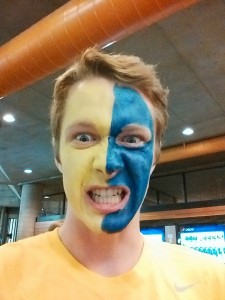 Vikes Nation ambassador Dan Mecham is already pumped about signing up for the Vikes Band course!

Current student and Vikes Nation ambassador Dan Mecham has already decided he’ll be enrolling in the Vikes Band course. “I’m really keen on school spirit,” he says. “I was on the pep band in high school and I love the atmosphere of people coming together, all united over something like a game. That’s really big for me.”

Mecham, who went to high school in Sacramento, California, immediately noticed the difference between American games with bands and Canadian games without. “In high school it made a huge difference having the band there,” he says. “At first it was just at the football games, but eventually all the sports teams were requesting we show up to their big games. I’m sure we can create the same atmosphere here at UVic, where people will recognize how much the music adds to the energy and enthusiasm.”

MacInnes is already working on a play list for the Vikes Band (“our repertoire will span popular tunes like ‘Sweet Dreams are Made of These’ and the Rocky theme ‘Gonna Fly Now’ to Balkan gypsy music and New Orleans jazz-style tunes, as well as the Vikes Rally Song by Music teacher Colleen Eccleston”), and says he hopes the Vikes Band will attract the more “energetic and outgoing” students. “A group like this gives students the opportunity to hone their skills and foster 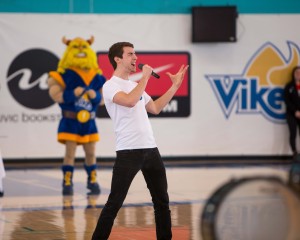 relationships with students from other parts of campus that will no doubt last into their professional lives.”

Given that this course is open to anyone who can play an instrument—even if you’re not a Music major—even a super-fan like Mecham is eager to sign up. What’s his instrument? “I played a little marching xylophone in the high school pep band, so I’m going to see what I can do to make that work here.”

Ultimately, Mecham—who plans on becoming an elementary school teacher—compares the Vikes Band to the Vikes Cheer Squad. “It’s part of that whole game-day atmosphere,” he says. “It will be great to both get credit for it and to have that mandatory practice time. I’m optimistic about the whole course!” 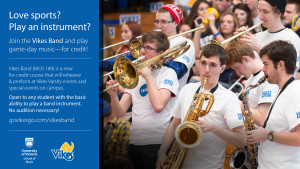 Remember, no audition is necessary and Vikes Band is open to any student with the basic ability to play a band instrument, and can be taken more than once.