To the cheers of a tight game and the applause of a packed house, the winner of the School of Music / Vikes Nation Rally Song Contest was decided at the Vikes men’s basketball game on January 10—and first prize went to the School of Music’s own songwriting instructor Colleen Eccleston! 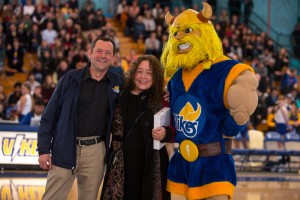 With 18 submissions from across campus—including entries by students, faculty and administration alike—the top three finalists were performed live at half-time by fourth-year Music student and rising star Josh Lovell. And while the crowd enjoyed the first two songs by Kyell Erickson and Kevin Grout, they clearly cheered the loudest for Eccleston’s song . . . which made the decision by the celebrity judging panel—new UVic President Jamie Cassels, Director of Athletics and Recreation Clint Hamilton, Director of School of Music Dr. Susan Lewis Hammond and varsity athlete Kyle Irvine—that much easier. Eccleston picked up a brand new iPad for her winning song, titled (obviously enough) “Vikes Nation.” Attendees of future games will hear a recorded version of Lovell’s rendition before the starting lineups of each Vikes home game.

Click here to listen to Josh Lovell singing Eccleston’s winning song, with a montage of photos from the January 10 event. 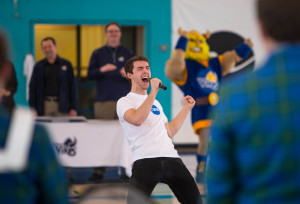 “It was amazing and exciting to hear them live.” says Eccleston. “[Lovell] could really sing it, and that made a difference. And it was doubly thrilling for me because one of my students in my History of Rock & Roll class—Terrell Evans—was playing in the game. I was really cheering for him.”

Eccleston is no stranger to basketball herself, having spent years on the court when she was growing up. “I was a hard-core basketball player when I was growing up in Newfoundland and in high school in Calgary, so I understand the game, and what a cheer has to do—and I feel my song has that, the rhythm and the melody,” she says. “But I actually wrote five songs for the contest; I just wanted to come up with the right one.” 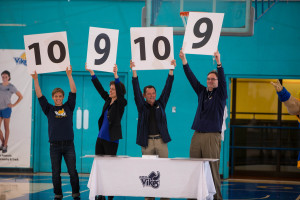 Just to give it an audience test-run, Eccleston even played her entry for one of her classes before submitting it. “One of my students said he wished it had more about Vikings in it,” she chuckles. And of the five songs she wrote, how did she decide “Vikes Nation” was the right one to enter? “One was too fast, one was too slow, and one of them was almost hip-hop-ish, very modern—but I wanted something more primal.” she explains. “When I heard Josh sing it, I knew I had chosen the right one. And I used that Queen ‘We Will Rock You’ beat because I knew people would pick up on it so fast. It’s got that atmosphere of the opening game, to intimidate the other team.” 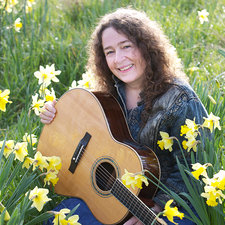 While Eccleston—a veteran local singer and actor who teaches not only songwriting and the history of rock and roll for the School of Music, but also courses on the top-20 albums of all time and the Beatles—may be better known for the folk and popular songs she performed with her long-running band The Ecclestons (“this was definitely out of my genre,” she admits with a laugh), she was keen to give it a shot when she heard about the contest. “I thought it would be good to do it in the spirit of the contest. Plus, it was fun to contribute to the school spirit. I teach people from all over the university, so anything that builds that interdisciplinary spirit is a good thing.”

When asked if there was any way to turn it into a teachable moment for her students, Eccleston laughs. “Maybe I’ll make writing a cheer a future assignment for my songwriting class,” she says. “I get my students to write all kinds of things, make them write outside of the box—people tend to write the same kind of songs over and over again, so I like getting them students to write things like arias, music that has different rules.” 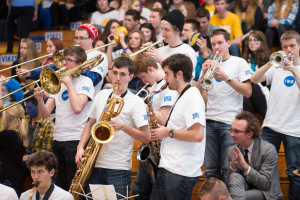 All in all, it was a fantastic night for the School of Music in the McKinnon Gym, with the UVic Jazz Ensemble—led by Music professor Patrick Boyle—also getting in on the action by playing upbeat songs at both the women’s and men’s game.

Oh, and the men’s Vikes even won the game, beating rivals the Saskatchewan Huskies 55 to 46. Go Vikes!