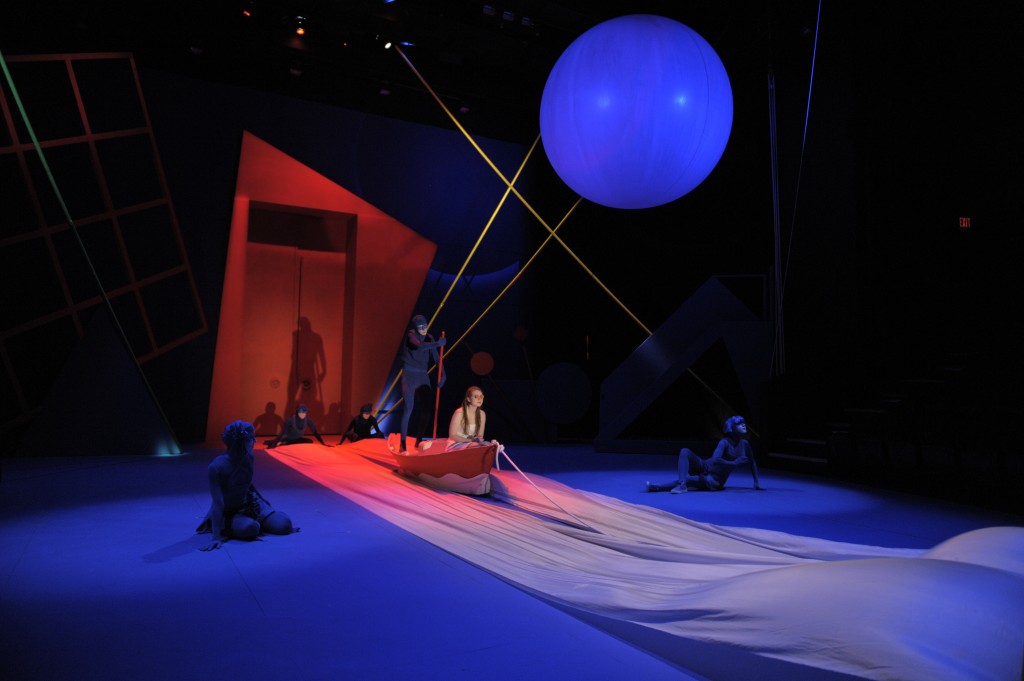 Ancient myth meets modern times in the latest Phoenix Theatre production, Euridyce, running through to February 25. A bold and dreamlike retelling of the classical Greek myth of Orpheus in the Underworld, award-winning New York playwright Sarah Ruhl re-imagines this story through eyes of its quirky heroine, Eurydice. Dying too young on her wedding day, Eurydice is reunited with her long-lost father in the whimsical, Mad-Hatter realm of the underworld, complete with singing stones and a playfully sinister Underlord.

Directed by MFA candidate Jeffrey Pufahl and featuring a particularly stunning visual design by acclaimed Theatre professor Mary Kerr, as well as an appearance by senior Theatre instructor Peter McGuire, this 105-minute, no-intermission production is, as  Adrian Chamberlain of the Times Colonist said in his review, “potentially a great fit for the University of Victoria’s Theatre department . . . hip, irreverent and educational.”

Reviewing for CVV Magazine, Chris Felling echoes that thought. “It’s been an impressive season so far for the Phoenix,” he writes. “Eurydice is a sharp right turn from the more traditional Rookery Nook and more importantly a show whose radical designs might not show up anywhere else in town.” Monica Prendergast on CBC Radio describes it as “very nicely done production” featuring “a visionary use” of the theatre space. And in their review, Monday Magazine describes it “a playful and artistic look at love, life, loss and separation.”

The TC‘s Chamberlain was particularly taken by Kerr’s “deeply artistic design,” which he called “an absolute tour de force—she’s created a strange, circus-like world (beautifully lit by Bryan Kenney) bursting with powerful primary colours and bold visual effects . . . . Kerr, one of the country’s top designers, has outdone herself with Eurydice. The thrust stage of the Chief Dan George Theatre is enveloped in cobalt blue, save for a jagged expanse of crimson on the back wall. Film projections (Orpheus, Eurydice, the father) appear on a giant floating sphere. A yellow metal ladder and a green pole each bisect the theatre chamber.”

CVV’s Felling says, “If you remember your 20th century painters, the set can best be described as a three-dimensional Miro painting. In contrast to the clear shapes and elemental colors, floods of smoke pour in from trapdoors and the gates of Hades themselves and the affably impish chorus of stones adds billowing sheets, ropes and pulleys, and old-fashioned acrobatics to the show. Weird? Absolutely. But marvelously theatrical.”

More than just the design, however, Felling was also taken by the cast. “The vulnerability and consequent naivete of Eurydice is ultimately what this play is about. [Alysson] Hall’s portrayal harmonizes with the sincerity and warmth of [Peter] McGuire and [Derek] Wallis as clearly as it accents [Graham] Mile’s scene-stealing alpha-male confidence.” Chamberlain also liked Hall’s turn in the title role, noting she “has success in finding the warm human heart of the character, making Eurydice the fully fleshed-out gal that the playwright intends. Hall conveys Eurydice’s whimsy and plucky intelligence.”

Ultimately, the TC‘s Chamberlain calls this one “a strange, beautiful dream” and notes “the visuals are compelling, even thrilling . . . . Eurydice veers close to becoming a performance art piece that, in turn, contains a play.” Simply saying, “Damn, what a show!”, CVV’s Felling concludes that Eurydice is “another Phoenix show that I can’t recommend highly enough, plain and simple.”