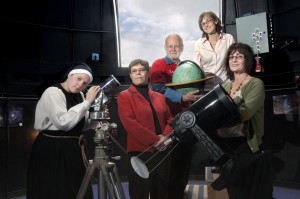 Word just came down that the original UVic play The Moons of Jupiter was a finalist in this year’s Herman Voaden National Playwriting Competition.

Written for 2009’s International Year of Astronomy by theatre historian and Department of Theatre professor Jennifer Wise, and workshopped by Theatre students and faculty, The Moons of Jupiter looks at the the family dynamics between famed astronomer Galileo and his children.

Millerd and Palmer commended the play for its “very strong voice,” its “fascinating idea,” and its “very discerning” and “demystifying” treatment of history and father-daughter relationships.

After being approached by Physics and Astronomy professor Sara Ellison about making a contribution to the International Year of Astronomy—a global celebration of the 400th anniversary of Galileo’s first telescopic observations—Wise realized that there was a scarcity of great plays on astronomical themes; and the best-known (Bertolt Brecht’s Life of Galileo) was historically inaccurate in its representation of Galileo’s family members, particularly in its depiction of his daughters. As a result, The Moons of Jupiter focuses on the lives of his two daughters in seclusion in the San Matteo Convent in Florence. Beginning with a comet that traverses the night sky in 1618, the play spans the years of Galileo’s altercations with Rome and his supposed imprisonment there.

“The members of his family revolve around Galileo like planets in a solar system, and it is through their stories that we can begin to understand this philosopher and astronomer’s entire life, not just his science,” Wise explained in a December 2009 Ring article. “I discovered, through the process of allowing these marginalized historical figures to speak, that Galileo’s family drama provides a surprisingly powerful tool for understanding his public life.”

Dr. Sarah Blackstone, Dean of Fine Arts, directed a three-week workshop process of this new play, with its first staged reading in November 2009. “As a collaborative project involving the playwright, director and students, we all learned a great deal in the process of making the script come alive,” noted Blackstone at the time. “The challenge has been to preserve Dr. Wise’s fascinating story while helping the author make necessary changes so that the play will work on the stage. For me, it was very nice to be able to set aside my administrative tasks for a time and engage in the creative process again.”

Jim Hesser, director of the National Research Council’s Astrophysical Dominion Observatory and the Canadian chair for the International Year of Astronomy, noted that The Moons of Jupiter was the only new full-length play created in Canada in honour of the event.