Cycling is much more than a hobby for fourth-year UVic Visual Arts student Kyra McLeod. The former Team Canada BMX racer has been commissioned to turn a concrete wall into a cycling-themed public art piece for UVic’s Sustainability Week (running October 13 to 16). “It sounded really unique and totally appealed to me, so I was all for it,“ says McLeod. 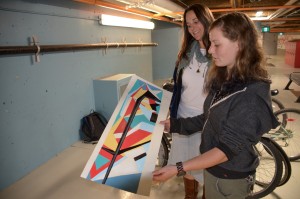 The 2.5 by 20-metre wall space is part of the Campus Bike Centre in the lower level of University Centre—a reclaimed car parking lot now devoted to bike racks, storage lockers and a bike loan centre. McLeod is designing the mural to reimagine space and objects, incorporating structural elements of the wall—such as pipes and heating radiators—into her artwork.

“I want to create a series of movements and relate it to cycling and the progression of the city towards sustainability,” she says. “I take a lot of inspiration from architecture. When I saw the wall, I really wanted to create a sustainable environment that would build from what already existed there. I wanted the mural to speak back to the actual surface of the environment it relies on.”

Members of the campus community, the media and the general public have been watching McLeod create the project throughout the week in the Campus Bike Centre, where she feels right at home. Explaining that she has “pretty much always been on a bike,” McLeod says she started racing when she was eight years old and is now among more than 2,000 UVic students, faculty and staff who cycle to campus. 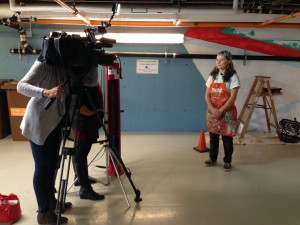 McLeod being interviewed by Shaw TV during Sustainability Week

In fact, it was her love of bikes that first brought her to Victoria. “I was actually racing in the equivalent of the world cup for BMX in Victoria when I was about 14, and I knew then that I was going to live here. Even at that age, I liked the campus and just knew I would be coming here.”

But it wasn’t just the campus environment that attracted her; she also felt the Department of Visual Arts was the right fit for her own creative practice. “I’ve always drawn and painted,” says McLeod, who has studied with professor and famed Canadian painter Sandra Meigs. “Art has always been a part of my life. I wanted to go to a school that was less technically focused and more idea-based, which UVic is known for.”

While McLeod’s mural is a first of its kind for both her and the campus, it’s a great example of the kind of dynamic learning that happens here on a regular basis. “It’s my first piece of public art and I’m really excited it’s at UVic,” she says. “I love my school and I want to give something back. I really hope it paves the way for future student work on campus and serves as an example to future Visual Arts students to make a contribution to campus and show their skills.”

—with files from Paul Marck