What do you get when you combine one of the best-known songs of the past 50 years with the latest technology? A fascinating art installation by Visual Arts sessional instructor Yoko Takashima: Bridge Over Troubled Water, continuing until May 30 at UVic’s Legacy Art Galleries Downtown. 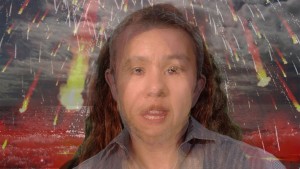 “In this project, no identical image or performance is seen,” says Takashima. “More significantly, this technology allows for unexpected narratives to be constructed through the constant self-generation of the video and sound.”

Takashima will be giving an artist talk about her project, beginning at 7pm Thursday, May 14, at Legacy Downtown (630 Yates).

Described as a “so-called music video” of Simon & Garfunkel’s classic “Bridge Over Troubled Water,” Takashima video-recorded 37 volunteer community singers—friends, family, choir groups, folks in the theatre community, both professional and semi- professional singers—in a variety of age groups all with the same framing: face centred and looking directly at the camera lens. The artist then used a green screen and chroma keying of the footage to provide the collage of singers with a background of moving images of ambiguous hybrid landscapes, which act as “visual metaphors of our modern reality, encompassing anxiety, horror and hope.” 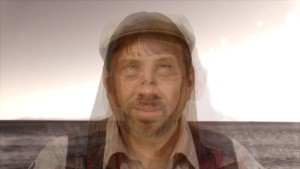 “It is significant for me to explore the shifting role of artists in the digital era,” explains Takashima. “In a time of saturated images, information and ‘high-speed fetch’, our role is now focused on selecting and preparing guidelines and then witnessing what technology can provide and manipulate. I am interested in exploring how technology used this way can produce effects beyond the artist’s authorship and premeditated aesthetic.”

Takashima felt the lyrics of “Bridge Over Troubled Water” convey a message of friendship and support, which she describes as “fundamental, ageless human needs. In exploring new technology with this song, we celebrate the up-lifting spirit in humanity and the new ways of delivering it.”

The exhibit is organized by Legacy director Mary Jo Hughes as the second of her continuing IN SESSION exhibits showcasing the work of the many sessional instructors in the Department of Visual Arts. But far from an exhibition of static work hanging on a wall, Hughes feels it’s the viewer who really brings Takashima’s work to life. 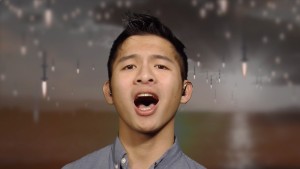 “When the darkened exhibition space is vacant, the audio plays quietly while the video is reduced to black and white,” she explains. “When someone enters the space, the sound level and colour intensity are gradually increased—the nearer one approaches the projection, the louder the sound becomes. To retreat is to attenuate the volume. The layered faces fill the wall in magnitude larger than life.”

“We see the singing human faces as beautiful in their openness and sincerity, while verging on the ridiculous in scale, proximity and unexpected combinations of over-layered facial features. The space is filled with their presence,” Hughes continues. “While interactivity has been integral to some of her past works, the constant regeneration of this work is new to Takashima’s 20-year video-based practice. It represents her desire to push video installation art beyond simple screening pieces placed within a space to offering infinitely-varied experiences involving the whole space with the viewer.” 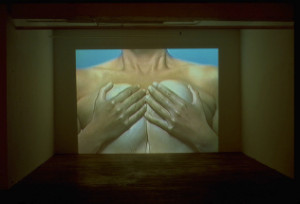 Hughes notes that, over the past two decades of work, Takashima has consistently “focused on her own body over various stages of life to explore her place as an individual while concurrently delving into the universalities and depth of human existence.” Video works such as Brushism (1996), As If (1996) and Islands Burning (1998) saw Takashima presenting her body as non-narrative subject, “performing within a limited or unidentifiable context, often truncated, anonymous, and isolated in an unnervingly close proximity.”

Bridge Over Troubled Water, says Hughes, represents the artist’s “continuing interest in using technology as an artistic tool in her ongoing research into new modes of expression. In this work, Takashima involves us in an unending performance that personifies the interconnectedness of a larger more encompassing humanity . . . . The installation suggests that through family, friends, and basic human connections, we can provide for each other the support that will get us through the fear and discord that otherwise characterizes our world.”