Ann-Bernice Thomas doesn’t even hesitate when asked the most surprising aspect of being named the City of Victoria’s 2016 Youth Poet Laureate. “All the attention,” she says with a quick laugh. “Considering I didn’t really hear anything about last year’s poet, it’s been really surprising . . . but nice.” 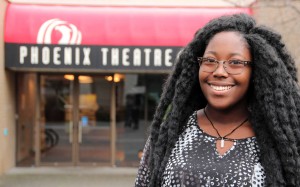 A second-year double-major in the departments of Theatre and Writing, Thomas was announced as the new Youth Poet Laureate in January and quickly received a flurry of attention from nearly all of Victoria’s media outlets, with interviews in the Times Colonist, Victoria News, Martlet, and the Nexus.  Her one-year term, jointly funded by the City of Victoria and the Greater Victoria Public Library, ends on December 31, for which she will receive a $1,750 honorarium and $1,000 in special project funding.

With a mandate to create and present new works to both Victoria City Council and Youth Council, conduct poetry readings at City and Greater Victoria Public Library events, and organize a community youth poetry event—in addition to her regular studies—Thomas will definitely have her hands full in the year ahead. “I’m excited about it, but I’m also planning to do a lot during the summer when I’m not in school,” she says. “I’m really hard on myself and want to do a good job. I can only be as good as I can be, so I’m totally motivating myself.”

Born in England, Thomas has lived in a Toronto suburb since she was seven and specifically moved to Victoria to attend university. “UVic is the only school in Canada that offers a double-major in creative writing and theatre, and it also has the best writing program,” she says. “UVic is special—it was a very good choice. I love it here!”

Thomas is the third UVic student to hold the position. Then-writing undergrad (now alumna) Aysia Law was named the City’s inaugural Youth Poet Laureate in 2013—the first position of its kind in Canada at the time—and women’s studies major Zoé Duhaime held it in 2015. Victoria’s inaugural Poet Laureate was writing instructor Carla Funk, who held the position from 2006-08, and current Poet Laureate Yvonne Blomer is also alumna.

Thomas has already made her debut as Youth Poet Laureate at a Victoria City Council meeting, and will be mentored by Blomer in the coming months. “I need to sit down and plan what I want to do,” she says. “For example, I was just interviewed by a poetry radio show in Edmonton; it’s such a cool idea, so now I have to talk to CFUV about whether it’s possible to do a show like that. But I’m also putting together a blog for myself and for local youth to post to, and I want to host a few poetry/theatre workshops as well.“ 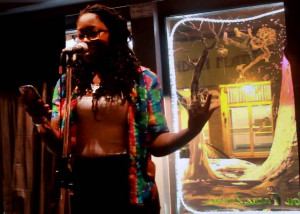 Already an accomplished spoken word artist, Thomas is also passionate about the impact poetry can have on a young person’s life. “As an out-of-towner, I don’t really know the ‘youth’ of Victoria,” she admits, “but I’m very excited about sharing poetry with them. It made such a big impact in my life.”

Having performed at social justice events like the AIDS Walk for Life and a Ferguson Rally back home, Thomas has seen the power of poetry first-hand. “I grew up in a pretty non-multicultural town, so it makes a big difference being a minority . . . so many people are raised with micro-aggressions and subtly racist ideas, and the only way to unlearn those it is to talk about them. Poetry is a surprisingly evolving art form and a very good medium for social awareness, because you can be honest and entertaining and punchy and make people think, all at the same time. And once you get people thinking, you can get them learning.”

And does the latest Youth Poet Laureate have a motto, any words to live by? “Everything is poetry!” Thomas laughs. “So do poetry. That’s about it.”

Click here to listen to Thomas perform one of her pieces, “The First Time I Saw God.”