Judging from the reviews rolling in, the latest production from Phoenix Theatre is proving the adage than an oldie can absolutely be a goodie. First mounted way back in 1942, Thornton Wilder’s The Skin of Our Teeth won a Pulitzer Prize for Drama—as did his better known play Our Town—and clearly still has legs for today’s audiences. 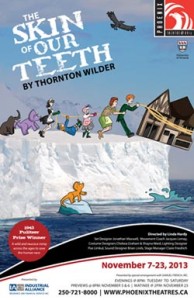 “Look at the state we’re in globally, right?” director and Department of Theatre professor Linda Hardy said in this Times Colonist preview article. “That’s one of the reasons it’s still so fresh.” (You can hear more from Hardy about her vision for bringing The Skin of Our Teeth to the Phoenix stage via this podcast of her live opening weekend talk.)

UVic’s student newspaper The Martlet also made Teeth their cover story for opening week, including a nice preview article with assistant director and puppeteer coach Chari Arespacochaga, which you can read here. And you can listen to this interview from the CFUV campus radio show U in the Ring featuring Arespacochaga and Skin of our Teeth set designer Jonathan Maxwell.

A allegorical satire, Teeth takes us on a wild and raucous tour through the ages, via the suburban New Jersey home of a perfectly middle class family. But can the family survive the ravages of ice ages, global warming, storms, floods, depressions and war? You’ll have to see the show yourself to find out, but this production is certainly surviving the slings and arrows of the local theatre critics. 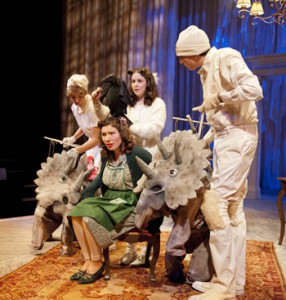 Adrian Chamberlain at the Times Colonist gave the production 4 1/2 stars in this review, calling it a “theatrical extravaganza.” Noting the clarity of Hardy’s direction, he highlighted the “lovely production values [and] strong student acting”—specifically Markus Spodzieja and Julie Forrest—as well as the “terrific” costumes and “expertly-constructed puppets of such animals as crows and wooly mammoths, manipulated with skill.”

David Lennam—one of the theatre critics for local CBC Radio morning show On The Island—noted in his review that, “In keeping with the Phoenix Theatre’s tradtion at the University of Victoria, production value are super high, it looks great! . . . . My favourite moment involved these brilliant puppets—the triceratops, a woolly mammoth—and the students operating them even provide authentic sound effects for them. It’s just beautiful. Really clever.”

Lennam also praised the performance by Tea Siskin, as well as the costumes by Chelsea Graham and Shayna Ward, describing them as “brilliant [and] beautiful . . .  I think at the end of the year this might be the best dressed show in theatre in this town.” 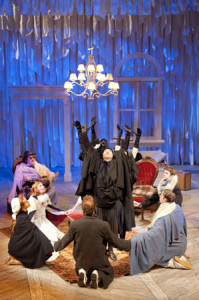 described Teeth as “a magnificent and mesmerizing spectacle, a veritable aural and visual feast” in this write-up about it. “The magnitude of the undertaking is tremendous,” she continues. “How do you adequately portray an Ice Age with its advancing icebergs, a flood of biblical proportions, war, and a contemporary middle-class home (complete with pet dinosaurs)?”

Meanwhile, this review for the online CVV Magazine sees local theatre critic Erin Anderson praising the student actors, noting there are “no notable weak links” in the large cast. She specifically highlights the work of Siskin (whom she describes as being “quite fantastic”), Kathleen O’Reilly, Ian Simms, and Amy Culliford.

“The Skin of Our Teeth may be absurd in premise, but it’s full of substance underneath its sensational trappings,” writes Anderson. “The Phoenix production has much to commend it, and the piece proves to be an excellent choice for them, combining theatrical meat for its actors with an engaging show for its audience.”

Finally, local theatre blog The Marble also praised the show, with reviewer Jocelyn Tennant noting that she was “sucked into the production. The sets, costumes, props 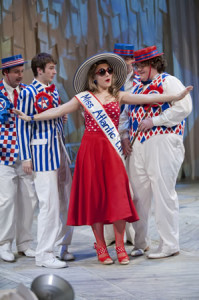 (especially the dinosaur puppets) were so intricately designed that I had no trouble committing to the extensive run-time. I was especially impressed with the amount of detail that went into the costume design, in particular in the second act.”

Among Tennant’s highlights were the work of designers Graham and Ward. “I would whole-heartedly recommend this show,” concludes Tennant. “The cast quite simply shines, every element of the production is polished and professional . . . plus, those dinosaur puppets are pretty incredible.”

The Skin of Our Teeth runs through to November 23 at the Phoenix Theatre. Click here for ticket info.