When the cast and crew of the Department of Theatre play Gut Girls joined thousands of others at Victoria’s Women’s March on January 21, it was a case of life and art once again coming together. 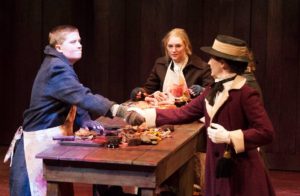 While the emancipation message of Gut Girls is told through the lives of women in a different century, gender inequality is definitely not only a subject for a period play. Written in 1988, Gut Girls is one of playwright Sarah Daniels’ most produced plays — perhaps because its message still speaks to today’s audiences.

Phoenix Theatre’s Gut Girls offers a historical look back at the Deptford slaughterhouses of the late 1800s, where women as young as 14 made a living working in one of the lowest, most disreputable jobs in society. The play follows the friendships of five brash and unrefined young Victorian women who make a decent living gutting cattle, working under horrific slaughterhouse conditions — until a well-intentioned upper-class character, Lady Helena, becomes intent on helping these “gut girls” find work as proper house maids; when the gutting sheds are shut down, the young women are forced to choose between how they make a living and how they want to live.

The play was originally commissioned by Albany Empire Theatre in Deptford to draw working-class Londoners to the theatre by telling the community’s stories and history. Characters like Lady Helena are directly inspired by the “philanthropic efforts” of the Duchess of Albany. In both the play and in history, there exists a gendered hierarchy in the workforce. In the slaughterhouses of the 1890s, women made considerably less than their male counterparts. But compared to working as a maid in service — traditionally seen as “women’s work” — women were able to make a respectable living. Daniels’ play offers insight into the history of devalued women’s labour. As Maggie, one of the “gut girls” in the play, says: “I tell you girl, you may think this place is hell but we get paid in one week nearly what you get for a whole year in service, so by comparison it makes this place seem more like paradise,” 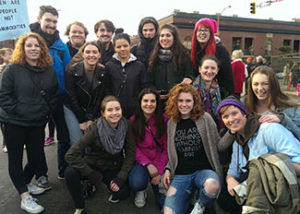 The cast at the 2017 Women’s March in Victoria

Unfortunately, a considerable wage gap still exists today — even in Canada. According to the Canadian Women’s Foundation (CWF), the average Canadian woman makes just 66.7 cents to man’s dollar (based on all annual earnings, 2011 Census), and women of colour make even less. There are various factors that affect this wage gap, for example, female-dominated fields are often related to domestic work which is still not valued as a skilled form of labour. CWF estimates that, in general, lower-paying jobs such as teaching, office and administrative work, and retail/customer service jobs make up around two-thirds of the female workforce. In addition to these factors, however, a large portion of the wage gap remains unexplained, and is due to discrimination against women — especially indigenous women, women with disabilities, and women who are members of a visible minority.

Gut Girls director Alix Reynolds has no doubt that many of the issues that face the female characters in the play are still faced by women in Canada and across the globe today. “This distinctly feminist work spoke to me with its relevance to current issues — the advocacy for women’s reproductive rights, equal pay, and domestic recognition — presented through the historical period of the 1890s,” she says.

Despite the continuing struggle for emancipation and the various waves of feminism, recent controversial news stories have prompted a resurgence of protests across the world. On Saturday, January 21, over 3 million people participated in women’s marches in 673 cities across 57 countries. Among the protesters in Victoria was the entire cast of Gut Girls. 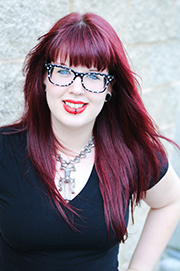 “We march because a play set over 100 years ago discusses the same issues we are still fighting for today,” says theatre student Shea O’Connor, who appears in Gut Girls.

Reynolds, like Daniels, is no stranger to tackling feminist issues through art. The young director hails from St. John’s, Newfoundland, where she founded Joint Productions, a theatre company committed to blending comedy with thought-provoking and innovative theatre. Since she began her Masters at UVic, she has explored several challenging contemporary plays including Crave (Sarah Kane), Mud (Maria Irene Fornes) and In on It (Daniel MacIvor). Gut Girls marks her thesis production for her MFA in Directing.

“Gut Girls is constantly reminding me to question what we deem ‘acceptable’ and to redefine the gender binary. It is a piece of theatre that lives in 1899 and breathes in 2017,” says Reynolds. “As theatre artists, performing a play like Gut Girls is our way of protesting.”