Hearty congratulations go out to the Fine Arts alumni team behind the locally shot 2015 feature film The Devout—including writer/director Connor Gaston and producers Daniel Hogg and Amanda Verhagen—which won seven major awards out of 14 nominations at the annual Leo Awards on June 5. The Devout won Best Motion Picture, Best Screenwriting, Best Lead Performance (Male & Female) and Best Performance by a Female in a Supporting Role, Best Casting and Best Editing. Gaston holds an MFA from the Writing department—in fact, the script for The Devout was his MFA project—while Verhagen graduated from Theatre. Hogg is also a Writing alumnus and is a staff member in the Faculty of Fine Arts. 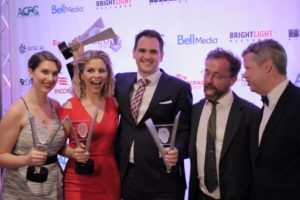 The Leo Awards annually honour the best in BC film, television and web production. You can see the full list of winners here.

Based on true events, The Devout is the story of a humble father in a rural Bible-belt BC town who must face his church, his wife and ultimately himself when he begins to believe that his dying daughter was an astronaut in a previous life.

You can watch a trailer for it here.

Gaston says he used a childhood memory as inspiration for the story. “When I was three, my parents half‐seriously asked me if I could remember being someone else. According to them, I said yes, claiming my name was Mark and I’d been a carpenter.”

Gaston also says he knew he wanted to make movies when he realized that screenwriting would not be enough to fulfill him creatively. His advice to other aspiring filmmakers? “Do it yourself. Use your iPhone if you have to. These days there are no excuses.”

Film director and screenwriting professor Maureen Bradley, who was also Gaston’s MFA supervisor, says UVic’s writing department is unique in its approach to teaching film. “I think we have the best student screenwriters in Canada here,” she says. “This is a unique situation where the production comes
through the writing first. I’ve seen beautiful films at student screenings across Canada, but the story is usually lacking,
so it’s really exciting to see story and surface come together here. Why make a film if there’s no heart to it?”

Indeed, neither Gaston nor producer and current Fine Arts staff member Hogg are strangers to the Leo Awards, with nominations and wins going back over the past few years thanks to various independent film projects like Two 4 One, Gord’s Brother, Floodplain, Godhead, Woodrow Without Evelyn, and the student projects ’Til Death and Freshman’s Wharf.

The Devout was made possible by the Telefilm Microbudget Program, the BC Arts Council and Cinevic Society of Independent Filmmakers.