From the underground to the mainstream, Intrepid Theatre’s annual UNO Fest is a hotbed of contemporary solo theatre and performance. Originally launched by Theatre alumna Janet Munsil in the basement of Victoria’s Bedford Hotel in 1997, UNO Fest is celebrating 20 years of daring stories and acclaimed artists — and this year’s 11-day festival will once again feature a number of Fine Arts alumni, as well as one current student.

North America’s longest running festival of solo performance, UNO Fest has presented more than 330 solo shows over the past 20 years, and is proud to bring some of the country’s — and the world’s — most innovative solo talents to Victoria every May. From parties to soundscapes, from performance art to a salsa lesson, UNO is packed to the brim with genre-defying, boundary-pushing solo performance.

UNO Fest runs May 17 to 27 at various downtown venues. Tickets range from $18 to $30, with tickets and various mult-show pass options available through Ticket Rocket. And the opening night performance of every show at the festival is Pay-What-You-Can for tickets at the door, with 25% of the theatre’s capacity held for PWYC tickets. 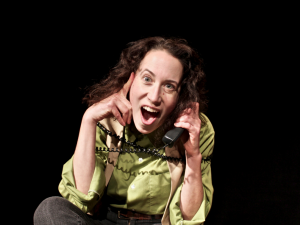 When do we become adults? What forges us into the grownups we become? What are the accidental rites of passage for teenagers of the Western First World? After the Beep explores the secret languages of adolescence and memory. It delves into the messiness of this in-between period of life that shapes all adults but that many of us would prefer to keep off the record.

Pamela Bethel is a writer, director, photographer, creative collaborator and former stage manager, who is also a childbirth educator and birth & postpartum doula. She recently toured as a core artist with Theatre SKAM’s Fashion Machine in the UK, was assistant director for 2016’s The Winter’s Tale at the Greater Victoria Shakespeare Festival, recently co-wrote/directed/built a show called Anxiety for Edmonton’s Theatre Yes — a “pan-Canadian, immersive performance-installation piece” — and also serves on the board of local Impulse Theatre.

After the Beep runs May 18 – May 19 at Intrepid Theatre Club, and is presented by celebrated Phoenix alumni company Theatre SKAM, whose artistic producer is Theatre alum Matthew Payne — who, in addition to being Pamela’s husband, was also director of the recent Phoenix play A Queer Trial. 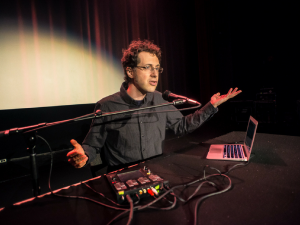 Punctuated with music tracks and manipulated sounds created live on stage, Fringe legend, master monologist and celebrated Phoenix alum TJ Dawe returns to UNO Fest with Burn Job, a story about growing up, blowing things up, LSD and a breathing technique that brings you into a psychedelic state.

He co-created and directed the famed The One Man Star Wars Trilogy — written by and starring fellow Phoenix alum Charlie Ross, with whom he also appeared at Phoenix’s 2016 Spotlight on Alumni. (Dawe and Ross are currently working on a  One Man Stranger Things.) He has a number of published scripts and his show Medicine can be viewed on YouTube in its entirety. He teaches a course on creating solo shows at Langara College in Vancouver. He leads workshops on creativity and the personality types of the Enneagram. He can be seen rehearsing (also known as wandering around mumbling to himself) in Stanley Park.

The Secrets of Naming Clouds 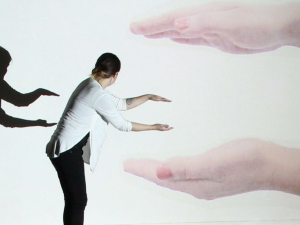 With The Secrets of Naming Clouds, recent Visual Arts MFA Kerri Flannigan offers a performance accompanied by moving image work, projections, sound and live-narration. Flannigan’s creation draws on utopic universal languages such as Blissymbols — an “anti-word” language designed to eradicate miscommunication — and Láadan, a feminist language created to end patriarchy. These idealized forms of communication are interwoven with coming of age stories; home videos and choreographed dances, dating bans, classroom conversations on consent, teen-girl vigilantes and a family trip to LA in pursuit of minor celebrity Adam Sessler, Kerri’s sister’s crush. To get a feel for the show, watch this video trailer.

Primarily working in video and performance, Flannigan’s work comprises an interdisciplinary approach to forms of experimental narrative and documentary. Her recent work has explored themes such as family mythologies, coming-of-age confessions, body language and swimming pools. She has shown locally and internationally, receiving a CALQ Multidisciplinary Arts Grant (2011) and Best English Zine at the Expozine Awards (2011 and 2014) and runner-up to the inaugural Lind Prize (2016). She is currently developing a new video-based performance work, Blue Crush, which will premiere in Victoria in the summer of 2017, and is an upcoming Artist-in-Residence at Open Space. 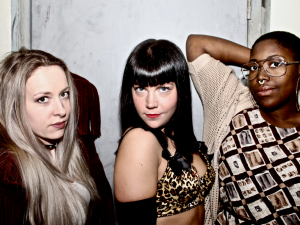 UNO Works is an evening of three short new works by some of Victoria’s most daring female artists, including current Writing/Theatre student Ann-Bernice Thomas, who was also the 2016 City of Victoria Youth Poet Laureate, as well as an accomplished spoken word artist, activist and actor. She’ll be appearing alongside local talents Eddi Wilson (AKA drag king/performance artist Eddi Licious) and actor/playwright Sarah Murphy.

Commissioned specifically for UNO Fest, UNO Works is artist-driven. There is no formula for making new work for the stage and we invite you to come and witness the thrill ride that is intrepid artists from diverse, interdisciplinary backgrounds redefining what theatre is.

Monobrow runs May 19 at the Intrepid Theatre Club. Admission by donation, the bar will be open, and all proceeds benefit the Megan Newton Scholarship Fund — named for the late Theatre alumna and much-loved Intrepid Theatre employee Megan Newton, whose life was cut short by melanoma in 2012, shortly after her 30th birthday.

Finally, UNO Fest kicks off on May 17 with WTF? (or What’s Theatre For?) by acclaimed theatre artist Daniel MacIvor, who was commissioned to write the world premiere of Inside specifically for Phoenix Theatre. With WTF?, MacIvor takes us on a journey through his personal and professional life to help us (and him) understand the accident of intention, the profundity of the random, and the wisdom of not knowing. WTF? is a keynote talk commissioned specifically for the 20th annual UNO Fest.