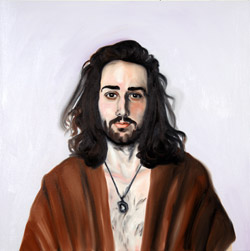 It was an invitation she just couldn’t say no to. When University of Victoria Visual Arts chair Daniel Laskarin asked imminent BFA grad maegan rose mehler to enter BMO Financial Group’s national 1st Art! Invitational Student Art Competition last spring, she wasn’t sure which piece she should submit—but fortunately, she went with her 36 x 36 oil-on-canvas portrait Josh, which turned out to be just the piece to mesmerize the judges. Thanks to Josh, mehler picked up the regional prize for British Columbia, becoming only the second UVic student to win in the competition’s seven-year history.

With 250 entrants across the country and 38 in BC alone, mehler is now one of 12 regional winners to pick up a $2,500 prize, with Université du Québec à Montréal’s Sandrine Côté named the national $5,000 winner. “It’s just crazy, I can’t believe it’s happening,” says mehler. “It feels great to have this opportunity.”

All competitors in BMO’s 1st Art! Invitational must have the support of their university to enter, and Laskarin didn’t hesitate to back mehler’s entry. “Maegan was one of our outstanding students,” says Laskarin. “She worked endlessly on her studio practice, curated the student-run exhibition space the Upstairs Gallery and contributed to the community of student life. She was one of those students who never stops—total dedication. On top of that, she has exceptional talent and developed a strong body of work in both painting and sculpture while she was here.”

In addition to winning $2,500 and an all-expenses-paid trip to Toronto for the exhibition’s October 5 opening at the Museum of Contemporary Canadian Art, mehler’s work will appear alongside all the winners in the fall issue of Canadian Art magazine. “What’s really crazy is that I had picked up a copy of Canadian Art magazine a couple of years ago and put a tab beside the BMO 1st Art! award and thought, ‘I should apply for this’—then totally forgot about it. I just found it again recently, because I save all my art magazines, and realized that’s exactly what I did. It was a pretty focused two years, so it’s pretty cool that that happened.”

“It’s really tough to be an artist in this country. It isn’t surprising to me that less than one percent actually make it over a five-to-10 year period,” says BMO curator and 1st Art! creator Dawn Cain. “One of the reasons I wanted to do this contest is because this is the time when you really need a boost up; usually you’re graduating with a basement full of art, your parents are often upset that you don’t have a job and your possibilities are pretty restricted—unless you have independent means, are going to grad school or get some funding to keep developing. The contest was intended as a way of acknowledging accomplished work and encouraging artists, recognizing their work is of value and that they should keep it up.”

And what made the winning difference with mehler’s piece? “Her piece was interesting as an image of a person who obviously invokes an image of an iconic religious figure . . . we don’t get too many painted portraits,” says Cain. “As with any work of art, you’re looking for something that looks original, that’s technically accomplished, where there’s an intention that comes through in viewer response, that uses the medium well—and all of those things were met in maegen’s piece.” (UVic’s previous winner was Matt Shane, whose piece “Rhizome” won the national prize in the inaugural BMO 1st Art! competition in 2004.)

For her part, mehler credits her instructors and mentors in UVic’s acclaimed Visual Arts department for her success—specifically Daniel Laskarin, Robert Youds, d. bradley muir and Sandra Meigs. “I’m really thankful for them; they all took care of me and put up with me. I asked a lot of questions and was a real pain in the butt, that’s for sure—but I wouldn’t have even applied for this competition if it wasn’t for them.”

Currently based in Edmonton, mehler will return to Victoria in September to curate an exhibit at the Fifty-Fifty Arts Collective on Douglas Street. When asked what she’s planning to do with her prize money, mehler just laughed. “I’m definitely not putting it towards my student loan—but I am going to be practical by investing it in tools for new works. But right now, it’s still in my bank, because it doesn’t feel real yet.”

See all the winning 2011 entries at the BMO Financial Group. The exhibit runs October 5 – 30 at the Museum of Contemporary Canadian Art, 952 Queen Street West in Toronto.