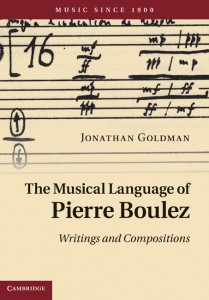 When last we heard from Jonathan Goldman—assistant professor of music history, musicology and theory for the School of Music—it was to announce the publication of his book, The Musical Language of Pierre Boulez by Cambridge University Press. Now, that same book has just won an Opus Prize in the category “Book of the Year.”

Awarded annually by the Quebec Music Council, Goldman describes the Opus Prize as “kind of like the Quebec classical music Grammys.” (But, we’re assuming, without appearances by the likes of Lady Gaga or Snoop Dogg.) Goldman was also mentioned in this Montreal Gazette piece on the Opus Prize. This latest accolade comes on the heels of Goldman’s previous “Article of the Year” Opus win for “Charting Mémoriale: Paradigmatic Analysis and Harmonic Schemata in Boulez’s … explosante-fixe …” 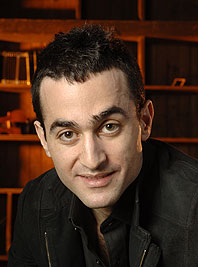 Specialising in 20th-century music history, Goldman is also editor-in-Chief of the journal Circuit, musiques contemporaines. He completed his undergraduate studies in philosophy and mathematics at McGill University, and went on to earn an M.A. and PhD from the Université de Montréal under the direction of Jean-Jacques Nattiez, with a dissertation which deals with form in the thought and works of French composer Pierre Boulez; he wrote the preface to Leçons de musique (2005), a collection of Boulez’s writings published in France by Christian Bourgois.

Goldman is also interested in the history of analytical practices and is a member of the research team “Mise en tableau/Écoute segmentée” at IRCAM (Institut de Recherche et Coordination Acoustique/Musique) in Paris. Somehow he also has time to perform on the accordion and the bandoneon, focussing on tango repertoire; in 2002, his arrangement of an orchestral piece by Astor Piazzolla was released by music publisher Éditions Henry Lemoine.