While university may be the logical choice for many high school students, not everyone finds their path right after graduation: many opt to spend some time working or traveling before deciding on a specific field of study. 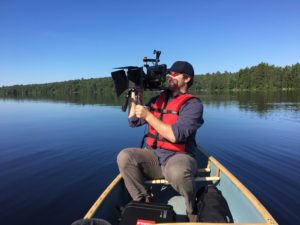 Brandon Poole made just such a choice, spending his 20s as a carpenter and electrician, hitchhiking across Canada, living on a sailboat; and the classes he did take (philosophy, photo journalism) didn’t lead to any specific path. It wasn’t until he decided to shoot a series of photos in downtown Vancouver’s back alleys that he had his academic epiphany.

“I was trying to find a way of resolving my myriad of skill sets without leaving anything behind,” says the 31-year-old Poole, graduating this month with a BFA in Visual Arts. “I like working with my hands, and I need an output that’s not just about writing and concept; it needs to be combined into a more overarching mode of work. Art school solved all those problems.”

Accelerating through his degree in just three years, Poole put his time in the visual arts department to good use. More than just taking classes, he also applied for (and received) BC Arts Council funding, took on a variety of workstudy positions at UVic — including darkroom technician, faculty studio assistant and lab assistant in the Studios for Integrated Media — launched his first solo gallery exhibit, The Principle of Original Horizontality, at the local Fifty Fifty Arts Collective (which he described as “kind of a mad science project,” in this Monday Magazine interview), was the undergrad representative on a faculty hiring panel, and was nominated for Vancouver’s inaugural Phillip B. Lind Emerging Artist Prize in 2016.

He also spent a good part of this past summer working with department chair Paul Walde on his latest site-specific intermedia project, The Tom Thomson Centennial Swim. Poole traveled to Ontario’s Algonquin Park where he put his camera skills to work as the primary videographer documenting Walde’s complex project, as well as handling logistics and equipment purchases. 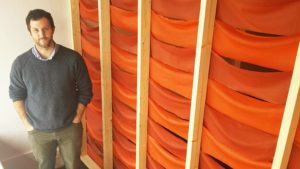 “All of these opportunities provided me with a well-rounded understanding of what’s possible in an academic situation for arts-based work, as well as the outside opportunities that exist,” he says. “It’s simply more skills to bring to the table for whatever I choose to do next.”

As for what is next, Poole says the next logical step is pursuing an MFA back east. “I draw a lot of strategies from journalism, from photography, from the building industry and architecture — and the outputs of those are videos, photographs, sculptures, and drawings, all of which get tied together in a specific space. The works aren’t enough on their own; the space is always highly considered.”

For a guy who never would have described himself as an artist before attending UVic, Poole has indeed found his path. “I really think the undergraduate program here is fantastic,” he says. “It’s especially useful for encouraging the cohesion of skills and interests.”