A historic agreement between Kwakwaka’wakw artist Carey Newman (Hayalthkin’geme) and the Canadian Museum for Human Rights (CMHR) was finalized on October 16 through traditional ceremony at Kumugwe, the K’ómoks First Nation Bighouse on Vancouver Island.

The ceremony marks the first time in Canadian history that a federal Crown Corporation has ratified a legally binding contract through Indigenous traditions‚ in a process that has attracted interest from legal and cultural communities, Indigenous peoples and academics all around the world. 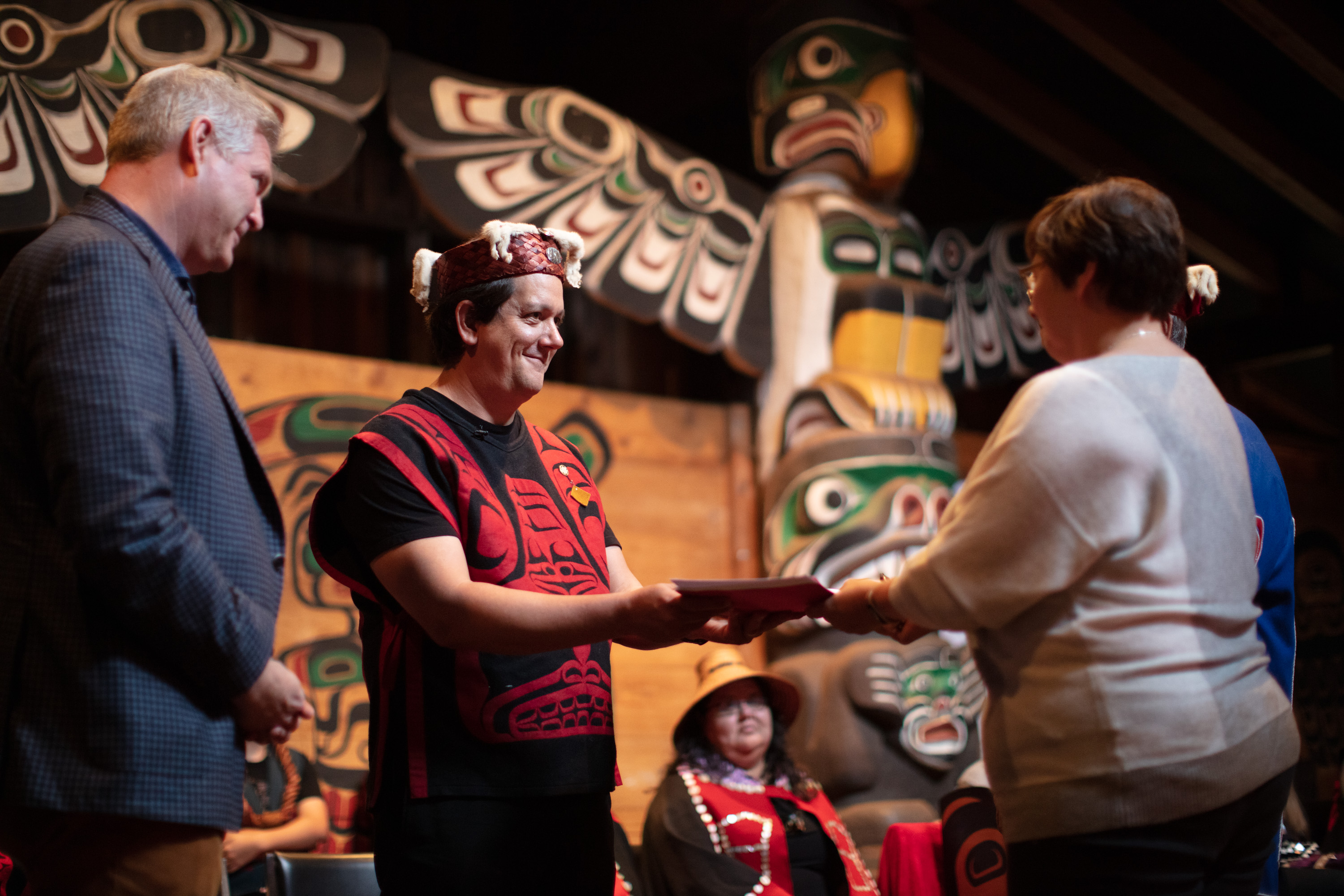 The groundbreaking agreement governs protection and use of The Witness Blanket, Newman’s powerful art installation made with over 800 items collected from survivors and sites of Indian residential schools across Canada. In an unprecedented process, Kwakwaka’wakw traditions and governance and Western contract law have been given equal weight, vesting rights with the artwork itself as a legal entity that carries the stories of the survivors.

The ceremony, held near Newman’s traditional territory, was facilitated by chief and spiritual leader Wedlidi Speck, head of the Gixsam namima (clan) of the Kwagul people. The ceremony included song and dance and the presence of an ancestors’ mask, with Carey Newman and CMHR president and CEO John Young each stating their purpose and intentions for the stewardship of The Witness Blanket.

Respected witnesses from the Kwakaka’wakw community, youth, elders and people with connections to the project, then reflected on their responsibilities as storykeepers and memory holders. The parties celebrated with a feast in the tradition of potlatch, acknowledging the gift of the agreement and the deep relationship that has been forged.

“Reconciliation means letting go of certain ways of doing things and looking for new ways that fundamentally alter the nature of relationships,” said Newman, a master carver and Audain Professor of Contemporary Art Practice of the Pacific Northwest in UVic’s Visual Arts department.

“Through spoken words and shared memory, we can express our commitment in ways that transcend written contracts — how we feel, our hopes and our goals for this agreement and our relationship as collaborative stewards of the Blanket and survivors’ stories it holds.” 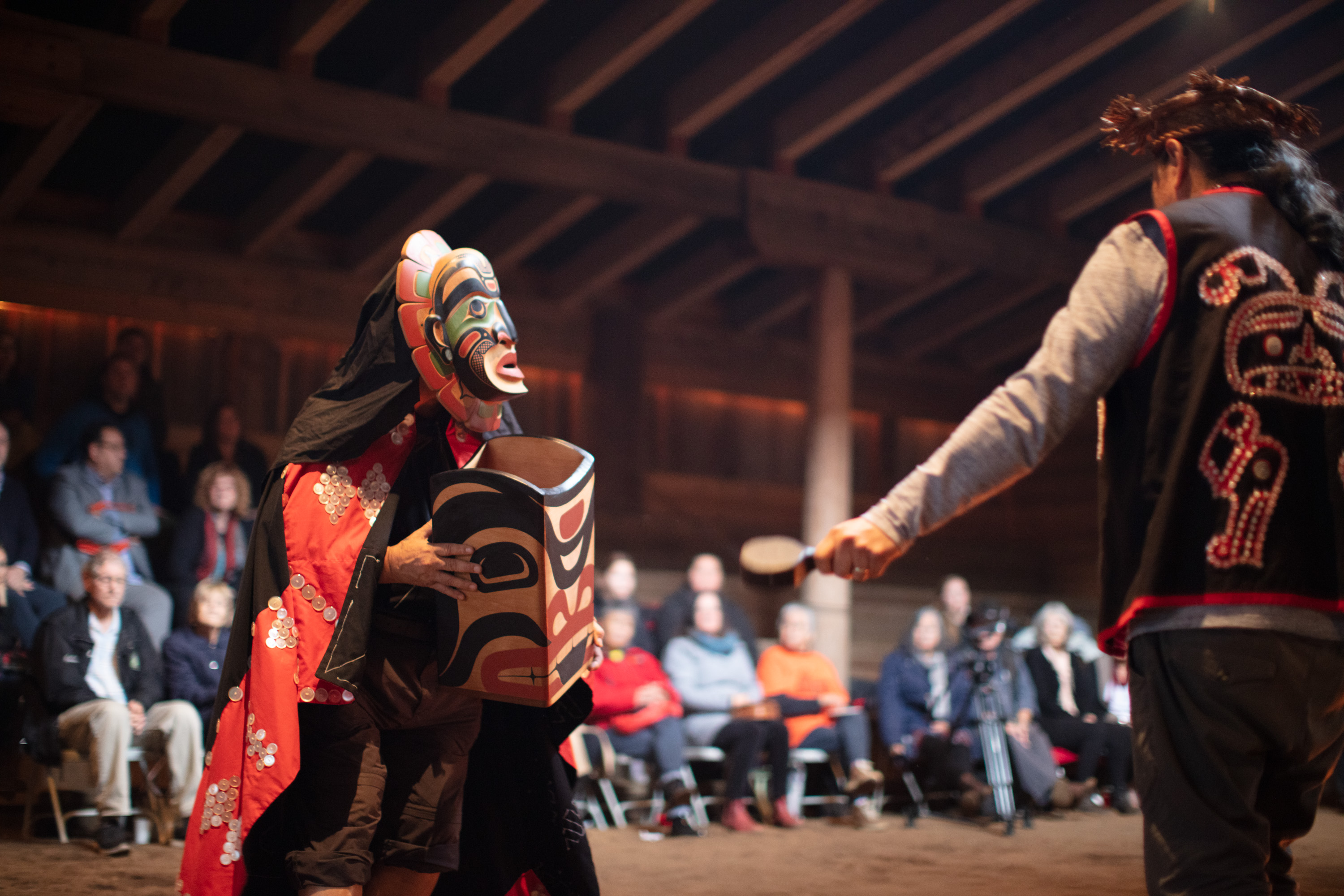 As part of the ceremony, Newman created this bentwood box specially to house the agreement (Photo: Media One)

Young said the approach to this agreement reflects the Museum’s commitment to recognizing the importance of Indigenous values in ways that encourage thought and discussion about promoting human rights.

“The Witness Blanket has national significance as a framework for conversations about the genocide of Indigenous peoples in Canada,” he said. “As we jointly acknowledge our duties as its caretakers, we want to begin in a good way, based on a strong relationship of shared understanding and respect.”

Professor Rebecca Johnson, Associate Director of UVic’s Indigenous Law Research Unit, said the oral ceremony binds each party together on a deeper level than simply signing a legal document. Through the bodies, words and interactions of participants, the agreement is brought to life as a physical entity, she said.

“It matters that the parties are face to face, that they see each other and hear each other express their commitments and intentions,” said Johnson, who attended today’s event. “The ceremony places the agreement firmly in their memories and embeds it in their personal intentions.”

The future of The Witness Blanket

The Museum will soon begin restoration work on the 12-metre-long, cedar-framed art installation, in preparation for an upcoming exhibition project. A travelling photographic reproduction is touring Canada, currently showing at the Neil John Maclean Health Sciences Library in Winnipeg until October 31 before travelling to other locations in Saskatchewan, Alberta, Ontario, British Columbia and the Yukon.

A new book called Picking up the Pieces: Residential School Memories and the Making of the Witness Blanket, has recently been released by Orca Book Publishers. An official national book launch is scheduled for November 20 at the CMHR in Winnipeg with Newman, co-author and former Writing instructor Kirstie Hudson and national CBC radio host and UVic Chancellor Shelagh Rogers.

A documentary film about The Witness Blanket — co-directed by Newman and Cody Graham — is also being distributed for educational purposes by the CMHR and for broadcast by Animiki See Distribution, a subsidiary of the Aboriginal Peoples’ Television Network (APTN).

The Canadian Museum for Human Rights is the first museum in the world solely dedicated to the evolution, celebration and future of human rights. Using multimedia technology and other innovative approaches, the CMHR creates inspiring encounters with human rights for all ages, in a visitor experience unlike any other.