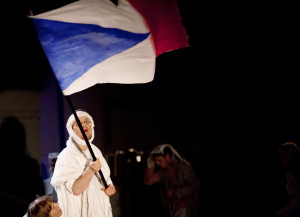 A scene from one of Thauberger’s films

Always an exciting part of each semester, the long-running Visiting Artist program in the Department of Visual Arts has announced their spring lineup. (More to come, but check back later for those.) Organized by Visual Arts professor Jennifer Stillwell, all these illustrated talks take place in room A162 of the Visual Arts Building, and all are free and open to the public. Come join us in exploring the wider visual arts world!

First up is notable Visual Arts MFA alumna Althea Thauberger. A Vancouver-based artist and film/video-maker, her works are generated from critical and historical readings of the physical, social and institutional sites they are generated within, and they are often developed in an extended process of cooperation and dialogue with their subjects. Thauberger’s film/video, performance and image works are informed by her background in the history of photography and issues related to the power dynamics of representation.

In recent years, she has developed projects at Prádelna, Bohnice Psychiatric Hospital, Prague; the Haskell Opera House on the Québec/Vermont border; the former Rikard Benčić factory in Rijeka, Croatia; and the Kandahar Airfield, Afghanistan. Thauberger has also been involved in teaching and organizing of public 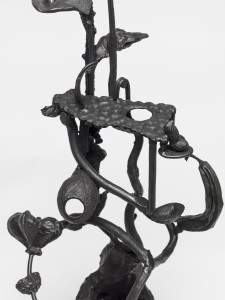 A detail of Carl Boutard’s “Island”

programming in impromptu spacesas well as at The Banff Centre; The Academy of Fine Art, Prague; and VIVO, Vancouver; among many others.

She’ll be appearing as an Orion Visitor in Fine Arts at 8pm, Wednesday, January 13.

Next up is Berlin artist Carl Boutard. Also an Orion Visitor, Boutard currently holds the Swedish Art Council residency at the International Studio and Curatorial Program in New York. His artistic practice has been shaped longing for the outdoors; he observes and reflects on the relationship between human beings, nature and culture. His work is presented as installations that incorporate drawings, sculpture, video, text and performance. A recurring theme is that which is about to disappear, that which possesses aura and authenticity, both visually and from the point of view of content.

Boutard has completed public art commissions in Sweden and Germany, and his work has been exhibited in solo and group shows across Europe and has been
awarded numerous grants through public funding bodies in Sweden.

Also an Orion Visitor, Boutard will speak at 8pm on Wednesday, January 27. 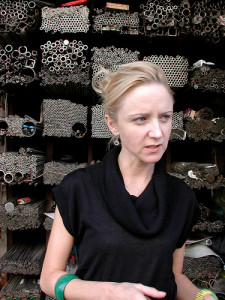 While the first two visitors are practicing artists, the next is curator Diana Freundl. The Associate Curator of Asian Art at the Vancouver Art Gallery since
2013, Freundl has curated a series of installations for Offsite, the Gallery’s public art project, including works by Shanghai-­based collective MadeIn Company and Mumbai-based Reena Saini Kallat. In 2014, she co-­curated Unscrolled: Reframing Tradition in Chinese Contemporary Art, one of the inaugural exhibitions for the Institute of Asian Art and most recently she co-­coordinated the touring exhibition Lee Bul.

With an academic background in comparative religion and philosophy, with graduate studies in journalism, Freundl lived and worked in China for 14 years, where she was an Artistic Director at Art+ Shanghai, and the curator at the Museum of Contemporary Art (MoCA). She co-­curated large-­scale exhibitions such as Night on Earth: Helsinki, Berlin, Shanghai (2007); MoCA Envisage II: Butterfly Dream (2008) and INDIA XIANZAI: Contemporary Art from India (2009). In 2012, she co-­curated Virtual Voices: Approaching Social Media and Art from China with Zheng Shengtian at the Charles H. Scott Gallery in Vancouver. 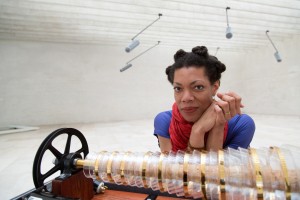 Coming up on March 9, Visual Arts is proud to present Camille Norment as a Distinguished Women Scholar Lecture. A multi­media artist, Norment often uses the notion of cultural psychoacoustics as both an aesthetic and conceptual framework. She defines this term as the examination of socio-­cultural phenomena through sound and music, and the contexts in which they are produced. Norment applies this concept towards the creation of critical works that consciously interweave the formal and the contextual; her artwork utilizes forms including sound, installation, light sculptures, drawing, performance, and video, all united by a preoccupation with the way in which form, space, and the body of the viewer create aesthetic and conceptual experience.

Norment performs as a solo artist, with other musicians in selected projects, and with her 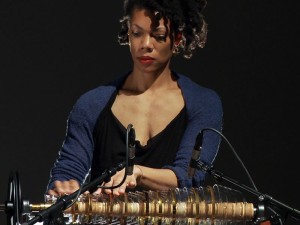 ensemble, the Camille Norment Trio—electric guitar, Norwegian hardingfele and the rare glass armonica—to explore the instruments’ collective sensual and cultural psychoacoustics across genre boundaries. Each of these instruments were simultaneously revered and feared or even outlawed at various points in their histories; through deconstructions of “beauty” and “noise”, “harmony” and “dissonance,” the visceral atmospheres they produce resonate through a tantalizing union of the instruments’ voices and their paradoxical cultural histories.

Don’t miss what promises to be a fascinating event at 8pm Wednesday, March 9.

Finally, on March 23, we have Vancouver-based installation artist Samuel Roy-Bois. Originally from Quebec City, Samuel Roy-­Bois’ ambitious and thought-­provoking installations have been shown across Canada and internationally.

His major solo installations have been exhibited at the Contemporary Art Gallery in Vancouver, Point éphémère in Paris, Parisian Laundry in Montreal, Oakville Galleries in Ontario and at the Musée d’art contemporain in Montréal, as well as being part of group shows in Vancouver, Ottawa, Québec City, Joliette, and Toronto’s Nuit Blanche, among others. He has also participated in international artist residencies in Denmark, Paris and Quebec. 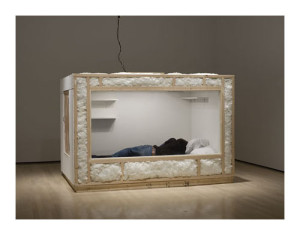 “I am always aware of working within an economy of means, voluntarily blurring the border between art and life, and to develop ideas about contemporary ideals and low-­‐scale utopianism,” he says. “These different artistic strategies are ways to promote ordinary objects and spaces into a poetic dimension, with the wish of renewing one’s gaze and perception.”

My work also puts forward ideas about time, by incorporating truncated elements of narration. An exhibition space can be divided into multiple rooms, which can be discovered in a specific order, following a precise path, similar to a musical piece. The work reveals itself through an accumulation of ideas and sensations that culminate into an appreciation of a complex universe both fragmented and coherent.”

Hear Samuel Roy-Bois at 8pm on Wednesday, March 23 in room A162 of the Visual Arts Building.